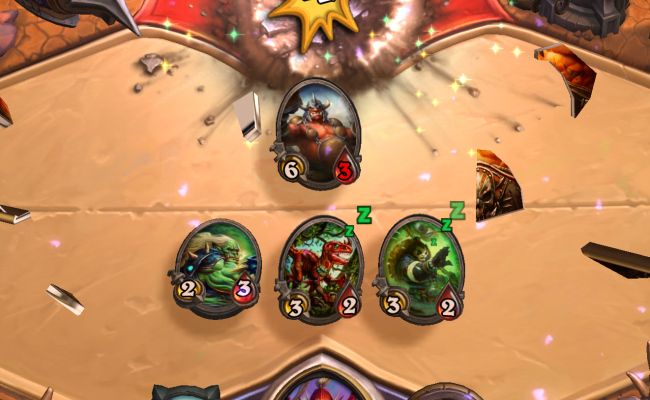 I’ve already written about how much I love Hearthstone. I talked about how the game is a ballet of mathematic interactions glazed with Blizzard’s trademark visual flair, production values and the World of Warcraft aesthetic. I probably said something about how the free-to-play elements are balanced with in-game currency that accrues at just the right speed to keep you from ever feeling obligated to spend real money.

I’ve admittedly fallen off my daily quest schedule quite hard in the months since Hearthstone‘s official release out of beta, but now it’s on iPad. Now the game has changed. 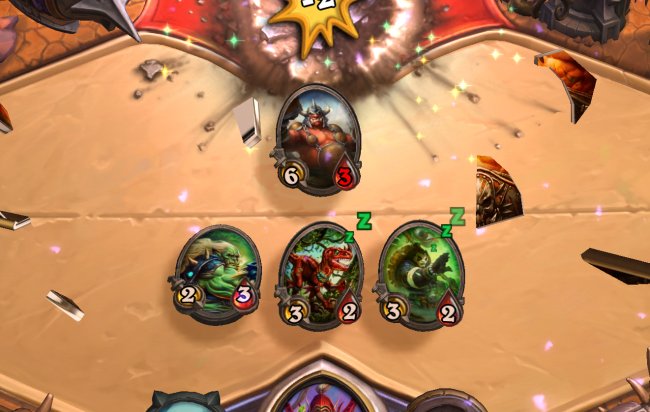 Except that it hasn’t, really, which is a good thing. It’s a fantastic thing, as Hearthstone was already a fantastic game. The transition to a mobile platform hasn’t changed that. In fact, it feels rather like the game has come home.

It was clear from the beginning that Hearthstone was designed with tablets in mind. The buttons were massive (perfect for grubby fingers to tap), movement was tactile (all the better to swipe cards with), and the corners of each digital playmat were filled with little minigames to keep impatient fingertips busy between turns.

It stands to reason that nothing has been sacrificed if the game was intended to move to mobile all along. Actually, it seems a few things may have been added. One or two of the already unnecessarily flashy special animations for cards, like lightning storms and clouds of noxious smoke, look to have enhanced or replaced with new, better-looking effects. 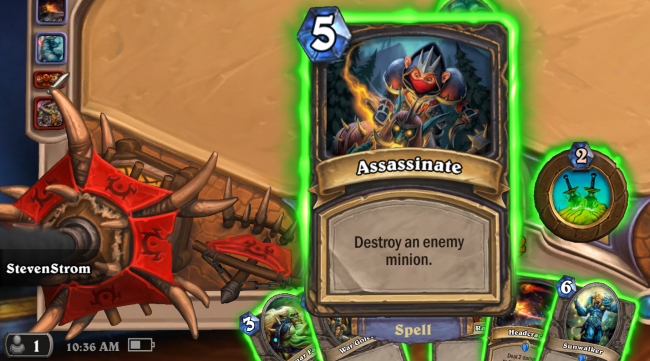 I knew the iPad version would be virtually identical to its predecessor. Still, in the back of my mind I assumed some things would be removed due to necessity: things like Hearthstone‘s social features, or ability to play across platforms.

I was wrong. The game connects to Blizzard’s Battle.net service just like before, carrying over all of your Mac and PC friends with it. You can play with them regardless of which devices either of you own the game on, and even keep track of and communicate with them while they play other Blizzard games like Diablo and World of Warcraft.

Of course, this means your mobile copy of Hearthstone is also subject to the whims of the developer’s servers. If Battle.net goes down for maintenance, so too does your ability to play. It’s already happened to me once (though only once) during the game’s soft launch, and boy, is it as annoying as it sounds.

Another, presumably less intentional problem I’ve encountered is that the game sometimes won’t let me access settings. Granted, since this isn’t the PC version there aren’t things like resolution and windowed mode to worry about. Really, it just interferes with my ability to adjust volume and card skins — it’s not the worst problem in the world, but I often like to listen to podcasts through my iPad while I play games.

Neither of these problems significantly alters my opinion of the game. In fact, they highlight why Hearthstone on a tablet is such a great idea. I want to be able to play it everywhere, all the time, and now I finally can. If the servers are down, or a bug makes it so I can’t do something else at the same time, what am I supposed to do? Not play Hearthstone? Ridiculous.

Matches only take a few minutes to complete, and since there’s no physical element there’s also no cleanup and manual setup as with your Magic: The Gatherings and the like. That was true on PC as well, but now that I can take Hearthstone with me on the bus, between classes, or waiting in line at the coffee place (if I want to look like a total nerdlinger).

Of course, with increased playtime comes an increased expectation. If I’m going to keep playing the game as much as I do, I’ll need more content to keep me satisfied. Blizzard seems to understand that, and now that the game has finally reached its true home, it looks like they’re prepared to release new content with the recently announced Curse of Naxxramas. 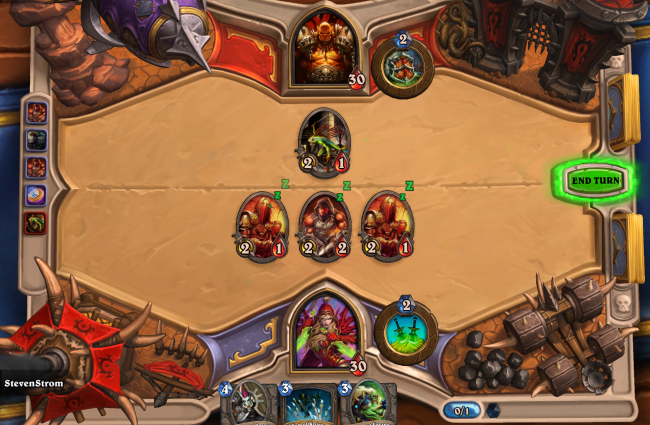 How good that and subsequent expansions are will likely determine my interest going forward. For now, though, I’m nowhere near burned out on what has become my personal favorite digital card game (and one of my favorite games on iOS).

Fast-paced matches, hidden depth, insurmountable presentation and some dang adorable minigame distractions make this something that just about everyone should try, even if — especially if — it’s your first, curious foray into collectible card games.