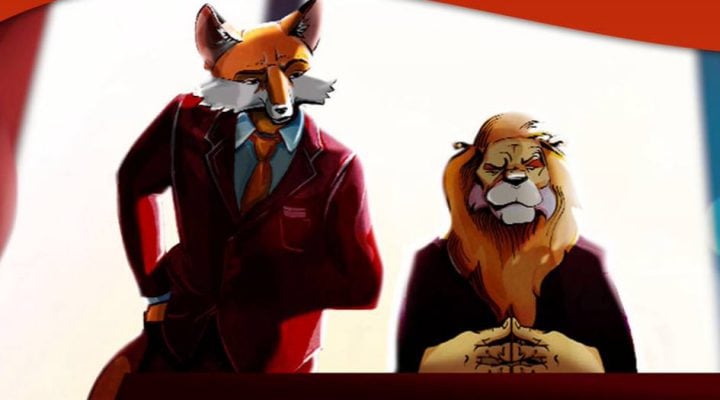 Tackles issues that mobile games usually shy away from.

Ultimately isn't actually that much fun.

Never quite sees through its big ideas.

Gets repetitive too quickly.

Head of State has an interesting premise, but it never quite manages to turn that idea into something solid. Despite the weight of its concept, it always feels a little bit flimsy, and while you’ll have an interesting time playing it it’s unlikely that you’re actually going to have that much fun while you’re doing it. And that’s a shame, since that core idea of political instability and the background machinations of the elite is one that could definitely do with exploring in the video game sphere right now. But Head of State doesn’t feel like the game that’s going to do it. 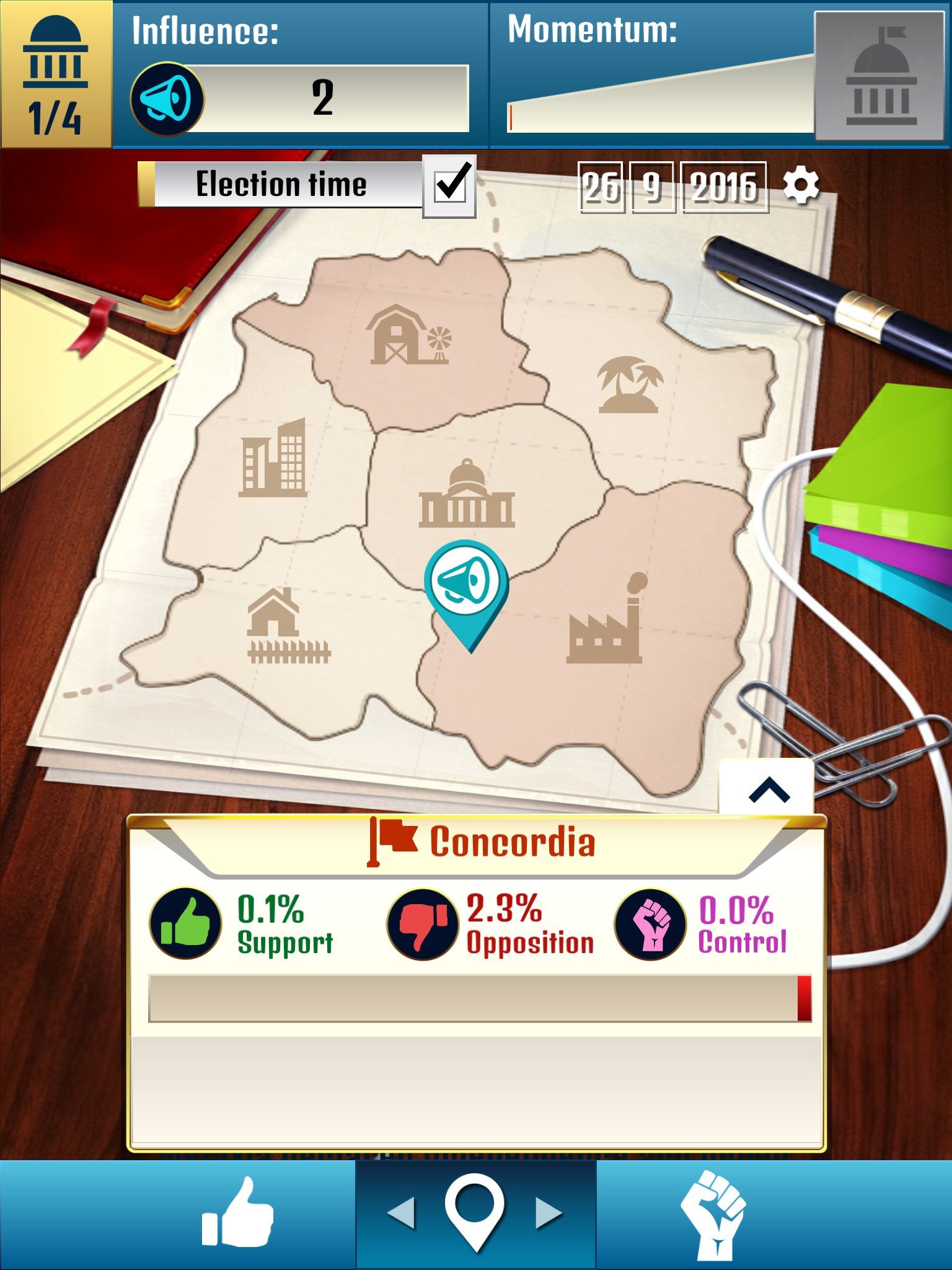 The game sees you taking the role of a fledgling politician who’s attempting to take control of a fictional country. A fictional country that’s full of anthropomorphic animals. To begin with you play by the book, trying to gain influence by instigating policies that the various regions of the country want you to do.

The main chunk of the game takes place on a map. Every now and then an icon pops up. Most of them are extra influence, which you can spend on your policies. There are also protests which will hack down your support stats if you leave them to fester too long in the country. There are events too, where you need to make choices over how to proceed. Your stats are tracked along the bottom of the screen. You can see your support, your opposition and the level of control that you have over the population. The top right of the screen displays your momentum, which you can use to trigger a revolution when you think the time is right. 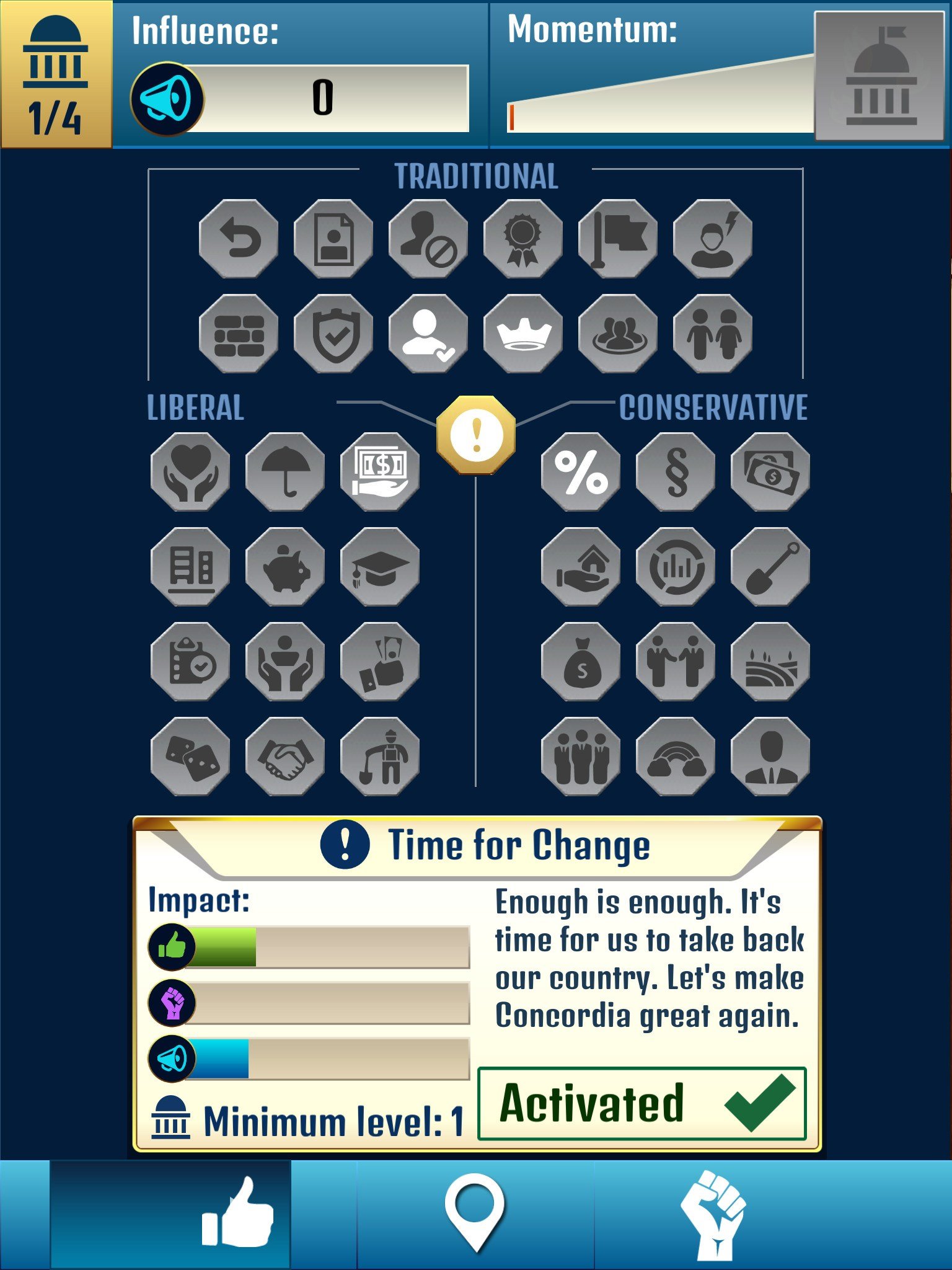 Once you’ve earned enough influence you can spend it either on policies to try and sway the electorate or on new methods of control. You need to balance out legitimate methods of appealing to the people who are voting for you and trying to manipulate them to do what you want.

There’s a decent chunk of reading to do in order to find out which policies you should implement. But they’re designed like an RPG skill tree which means there’s not that much to choose when you’ve earned enough. The same goes for the control options. Some of them only unlock when you’ve reached a certain level of electoral success. And it all means that the start of most games roll off in a similar direction. Amass power, make a few choices, see what options are dropped on you when the events occur.

And that slightly stodgy rhythm does nothing to keep your attention. You don’t feel like you’re really making any meaningful decisions, just poking at things on the screen and seeing what happens. And you’re never sure whether the choices you’re making are actually making any difference.

In a game of this style there’s really no excuse for that lack of scope. The decisions should be big and difficult, not things you poke and then move on from. There’s strategy here, don’t get me wrong — but there’s just not enough. Head of State deals with some big issues, but it never quite manages to give them the heft that they need to strike home. And on top of all that, it’s not really all that much fun.