By Bryan Lufkin | 10 years ago 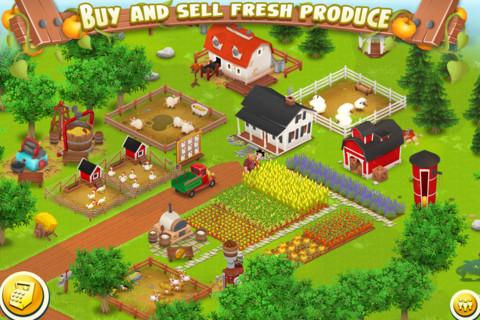 You know, I’ve always wondered: Would many of the people who love playing farming sims enjoy actual farmwork? Maybe not everyone has the diligence to wake up at the crack of dawn to milk the cows and till the fields, but that’s what videogames like Hay Day are for. And in Hay Day, you’ll be treated to one of the prettiest farming sims to date.

The backstory is simple: You’ve been left a huge farm to tend to. You’ll raise animals like chickens, cows, and sheep, and you’ll grow and harvest crops like wheat and corn. You’ll also have to juggle to myriad of tasks that goes into sustaining a grade-A ranch. Your critters must be fed and your silo must be painted, for example. Occasionally visitors from town or other farms will swing by, offering you tasks or money for your ware, like eggs or bread.

The biggest strength I notice is the graphics. Rich, beautiful detailed, with landscapes and zoom and pan, Hay Day‘s presentation is fairly cinematic for a mobile game. It’s eye candy. The controls are also smooth, nonintrusive, and use the iPhone’s touch screen well. For example, just tap on a plot of land, then run your finger across the field to collect the grown crops. You’ll use the same gestural controls to gather sellable products your animals will yield, like wool or milk. You’re also able to visit your friends’ farms via Facebook.

Replay value comes in the form of achievements. Simply click on your house to view all of the achievements you’ve unlocked so far: Collect several hundred eggs for Egghead, for example, or get lots of milk from your cows for Got Milk? As far as item collection goes, you’ll have to wait in real-time before your farm’s products are ready to be collected and sold. It may take a few minutes for wheat to grow, or a half hour for cows to produce milk. You can speed up the process by using diamonds, of which you have limited quantity, but can acquire more throughout the game. 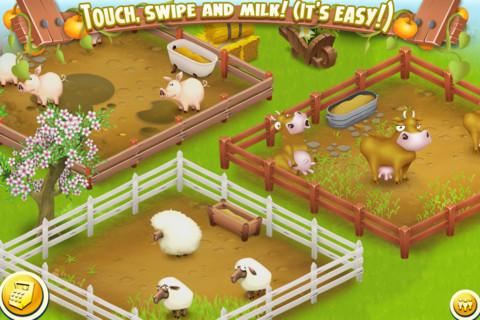 Really, there’s nothing to complain about here, other than everything feels quite familiar. With FarmVille and its ilk, the social farming sim has been shoved down our throats for years, and Hay Day doesn’t introduce anything exceptionally revolutionary to revitalize or rethink the genre. It’s also a bit annoying how the tutorial holds your hand for the first 15 to 20 minutes of gameplay. “Now let’s collect the eggs.” “Now let’s build the stable.” It’s not a gripe with this particular game, per se, just a gripe with many sims in general. Perhaps games should stagger out the instructions by introducing challenges that players can dwell on before a new gameplay element or technique is added.

One differentiating trait is the commerce element among players. Real people can post ads in the newspaper in order to sell their goods to other players. It’s a Neopoets-like system that connects players and their shops, which adds a social element the game doesn’t have otherwise. There are also computer characters that periodically arrive on your farm who will want to buy or sell goods.

Overall, this game is a gem and a steal for being available in the App Store for free. If you’re a fan of simulation games, Hay Day is visually pleasing and will definitely keep your inner agriculturalist giddy for hours.