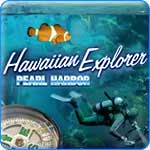 Charlie Johnson, an eccentric multi-millionaire, has a passion for travel and treasures. Not just any baubles, mind you, but those of legendary stature – ancient artifacts such as Japan’s 800-year-old Diamond Medal, set with a 96-carat gem. Presented in 1348 to the bravest Samurai in the Emperor’s court, it disappeared in 1756. Since then, many have dedicated their lives to finding it, including Charlie.

Now, having investing millions of dollars and years of searching, Charlie has a lead on the relic. As part of his Hawaiian-based diving team, it’s you task to scour caves, beaches, shops and sunken vessels in search of the lost artifact.

Play in iWin’s latest seek-and-find game, Hawaiian Explorer: Pearl Harbor, consists of a single, timed game mode. It spans 15 missions (locations), divided into five three-mission sets, and includes four bonus games, one at the end of each set. As with typical hidden-object fare, your task is to locate all the items on a given list. Each list contains a key object of importance to the story, say, a wooden box, dog tags, map, etc. Regarding the bonus games, three are jigsaw puzzles derived from a sketch or document and one, the final diversion, involves locating hidden objects, numbers and letters on a map.

Most missions take place in underwater shipwrecks, but some occur on dry land. Well, mostly dry. Caves, island bars and gift shops serve as examples. Listed items must be located in traditional object-hunting style. Simply find one and “click” to remove it from the current scene. When all items are collected, you advance to the next mission. A relatively easy task, it would seem. But, some things are extremely well hidden and may not, at first glance, look like the object listed. Your only way of knowing for sure is to click and see what happens. Multiple objects of like kind often appear on screen, too. For instance, there may be more than one tree frog or book visible – and only one is viable.

Plus, time is of the essence in each mission, as well as in the game overall. You need to watch the clock on individual missions, as well as the time remaining for the current set of missions. Run out at your current location and a replay is compulsory. Expend all your time for the mission set and you’re required to start the entire set anew. Time counts down as you play, but other factors also affect it. Three hints per mission are provided for when you’re stumped, but at the cost of a 45-second penalty each. You also lose 10 seconds for every errant click, so click wisely (and accurately). And, it pays to scrounge for air tanks. They serve as time bonuses, adding 30 seconds to the clock for each tank retrieved.

From a presentation standpoint, Hawaiian Explorer: Pearl Harbor generally serves up an attractive mix of photographic images and photorealistic art. Though, quality is inconsistent across the board with regard to the objects themselves. However, spot animations such as bubbles, swimming fish and moving leaves help add life to each static location, and background music is especially impressive, lending greatly to the game’s ambiance. Setting and storyline are plusses, as well.

Still, some elements in this underwater puzzler appear a bit murky. Items, as indicated above, are occasionally hard to identify. A few simply don’t look like the object they’re designed to represent while various “similar” items make for frequent 10-second time penalties, clicking on the wrong book, fish or other entity. A few items are misidentified, too. A frog referred to as a toad and a moose head identified as a deer.

Worse is the game’s oft-imprecise object selection. Multiple clicks are frequently required to register a given item. Further, the game lacks a relaxed mode of play, some typos are present, music occasionally “overlaps” itself sounding very discordant (like two songs playing at once) and no player stats, points or achievements are provided. It’s rather short, as well, offering less than three hours of play for competent object hunters. Finally, after pinpointing the location of the famed Diamond Medal, you don’t actually get to search for it – the game just ends. None of these points are killers, but the overall experience suffers nevertheless.

Offering yet another explanation for the odd accumulation of “junk” essential to the genre, Hawaiian Explorer: Pearl Harbor offers greater challenge than many other hidden-object diversions. While frustrating at times and lacking some amenities, it provides item-finding aficionados with an enjoyable, if somewhat brief, adventure.