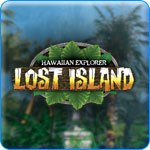 In this hidden object sequel you’ll join a team to search for Charlie Johnson, the famous 63-year-old adventurer last seen in Hawaiian Explorer: Pearl Harbor. In Hawaiian Explorer: Lost Island, Charlie embarks on a trip to find the lost island that belonged to the Hawaiian Gods. Your team starts in Charlie’s Manhattan office and will eventually land in Hawaii and explore deep into the islands where few have ventured before.

Charlie leaves odd clues and notes to lead you to him. His strange sense of humor rears its head in different locations and in the mini-games. Unlike its predecessor, Lost Island doesn’t have an obvious pattern to the number of levels or when mini-games show up. Like the original, this one comes with one mode.

In typical hidden object fashion, players search through each scene for items. Every level comes with 10 minutes for finding all of the listed objects. Beware – the timer ticks away 15 seconds when clicking on incorrect objects or 45 seconds when using one of three hints. It doesn’t take much to use up the clock. When that happens, the scene reloads with a new list of objects to find, although some might reappear on the list.

Seeking objects feels like a chore. The scenes contain many dark spots that make it hard to identify objects. Furthermore, the objects for many listed items look nothing like you expect. For example, a figurine looks more like a bad peach, green beans look like green brain matter in a jar, and a thumbtack can resemble a UFO. When butterfly appears in the list, the game won’t accept a jeweled butterfly, and the actual butterfly looks more like a fish than a butterfly.

In one incident, the hint identified an unripe coconut as a lemon, yet in a previous scene the unripe coconut is exactly what it should be – a green coconut. Another scene contained two guns and the game wouldn’t recognize one as acceptable.

Clicking right in the middle of the object doesn’t always take. Instead, the clock steals 15 seconds. When clicking on an incorrect (or not) object, few players will want to try clicking it again to be sure it isn’t a "misclicked" item.

The first time you open a mini-game, it comes without fanfare or instructions. To get help with a game, you can open the menu to reach the instructions, which don’t even do a good job of explaining the mini-game rules. Those who have played solitaire mah jongg won’t be able to figure out how to play the mah jongg mini-game as its two corners rule makes little sense. The rule says, "The line that can be drawn between them has no more than 2 corners."

After playing the mah jongg mini-game several times, it continued to confuse. A message keeps popping up when failing to make a match explaining why the match doesn’t qualify. It gets aggravating and has no off switch. The challenging puzzle mini-game is a breeze in knowing what to do. Hawaiian Explorer 2 also comes with a memory mini-game where you flip stones until matching all pairs.

The story has awkward sentences and omits many needed apostrophes. Furthermore, reading the story proves difficult with the dark background and thin font. At the start of the game, players can select a picture of a person, male or female. The team leader says, "MERYL with his group will go and check that way." Meryl is a girl, thankyouverymuch. Yes, Meryl uses a female character. Upon finding the long lost adventurer, Charlie says "Glad to see you gentlemen…" Hey, the team leader is a woman!

The game also doesn’t save the exact spot where a player leaves off. Upon exiting a game after completing a mini-game and then returning to the game reloads the mini-game instead of advancing to the next level. The scenes repeat multiple times and objects don’t move around. And an object can show up on the list a few times. For all this repetition, the game doesn’t run long. Maybe four to six hours.

Veteran hidden object game players who complain that the games don’t challenge will find Hawaiian Explorer: Lost Island plenty challenging. They might even resort to using hints considering the dark scenes hiding objects too well and some objects don’t look like what they should. The clumsy writing style, the frustrating mah jongg mini-game, and too difficult seek and find scenes will send many looking elsewhere for a tropical experience.