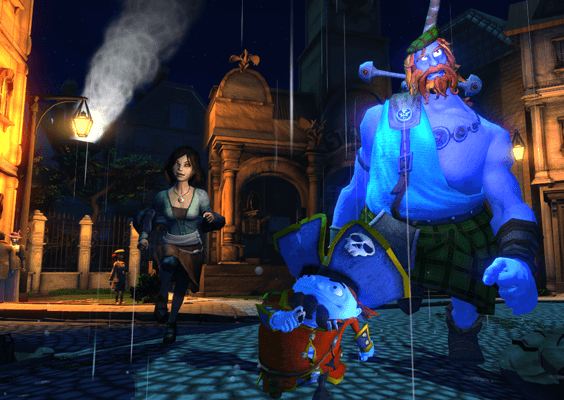 Who said being haunted can’t also be fun?

I’ve never been one to believe in ghosts. But Haunted has recently shown me that ghosts are not only real, but that sometimes they can be a cranky two-foot pirate named Oscar who won’t leave you alone. Using this as its hilarious groundwork, Haunted serves as a wonderful throwback to point-and-click adventure games like The Longest Journey and the Monkey Island series, with a charming story and challenging gameplay style all its own!

The game opens up with your character, Mary, being drawn to a spooky college campus by her deceased sister’s spirit on a dark and rainy night. Mary is quickly mistaken for dead by a duo of creepy villains, who for one reason or another are intent on cutting Mary open and looking at her insides. Things only escalate from this point forward, and there are just enough compelling mysteries in the beginning of the story to keep the player engaged and eager to see what happens next.

The levels are surprisingly intricate, and each gloomy, three-dimensional location is beautifully rendered with an amazing sense of depth. The entire game could have easily taken place in the first chapter’s haunted mansion-like university, but Haunted quickly moves past this cliché setting as Mary travels deeper into the city of London. Great relationships are established between the human and ghost characters, as the physicality of ghosts in this world is explored, and you find out that few other people besides Mary can even see Oscar. This game universe has its own set of regulations, and they work wonders in painting a real and believable backdrop. 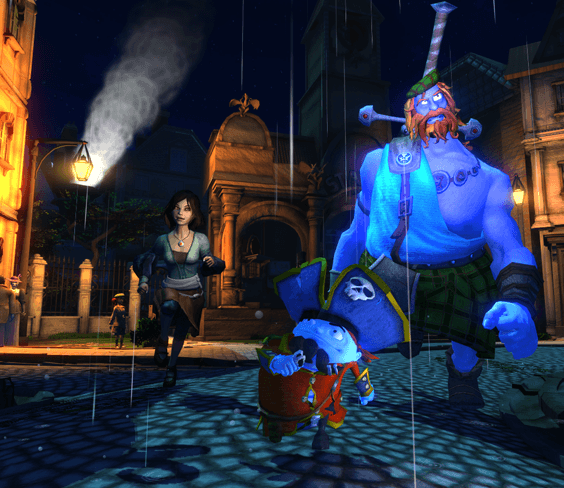 Haunted utilizes a perfect balance of spooky atmosphere and laugh-out-loud humor to quickly capture the player’s heart. When Mary is first introduced to Oscar, the tiny pirate ghost with an exceptional goatee, it’s safe to say that she’s a little creeped out. She tries to avoid him at first, and nonchalantly asks, “Can I suggest we run in different directions?” It also had me grinning ear to ear whenever I got to listen to Oscar and some of the other disgruntled ghosts bicker back and forth with each other.

But the humor doesn’t stop there. At one point, you have to coax a little girl from jumping off a tall, rickety structure to her own demise. But to my twisted delight, the game let me antagonize the girl instead, and have Mary spout line after line like “I know kittens that are braver than you!” and “Jump! Jump! Jump!” The game’s two antagonists, Professor Ashcroft and her dimwitted son Ethan provide just as much comic relief in their many attempts to recapture Mary (usually in the slapstick form of Ethan falling down or getting repeatedly hit over the head with something).

The game uses a fantastic ghost acquisition system to further develop your character and increase your explorative capabilities. As time goes on, Mary becomes haunted by more and more ghosts, which unlocks the apparitions in your inventory and lets you use their own unique abilities to help you progress. For instance, your first ghoul acquaintance Oscar is able to touch very hot things or items that have been electrified, while William the Scottish warrior ghost is able to do some heavy lifting, and interact with objects that are associated with death. It’s a great concept in theory and even better in execution, although sometimes it’s easy to forget that you have these ghosts at your disposal: especially in the trickier sections of the game. It’s one thing to combine two items in your inventory, but then to further combine it with one of your ghosts only stacks on the possibilities, and makes things real complicated, real fast. 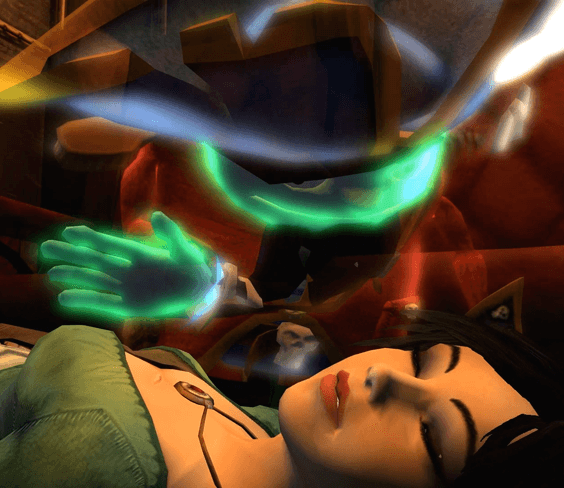 Some of the puzzle solutions in Haunted can be a little head-scratching at times, such as using a tooth scraper on a chalkboard to shatter a window two stories above you. You may want to have a walkthrough close at hand while you play, as the in-game hint system is often far from helpful. Early on in chapter two, you have to climb up the scaffolding of a bridge tower. When I asked for help on how to do this, Oscar simply told me to “use your surroundings” and “climb up the tower!” Thanks, like I didn’t know that, Oscar. The dialogue can also get repetitive if you try using an item in the wrong place or at the wrong time. In the first chapter, I mistakenly tried to use the “gloves” item on an electrified saw, and was immediately scolded by Mary: “How many times?! The gloves don’t help me here!” Geez, sorry! It was only the first time I tried to use the gloves there!

But minor quirks aside, Haunted is an extremely well-put-together point-and-click adventure game that’s both funny and fun from beginning to end. Everything about it, from the moody environments, to the intricate puzzle design, to its wonderful sense of humor and grin-inducing oddities make this an instant classic in the point-and-click genre. It reminds me of what a good lighthearted adventure game should be like. And so now if you’ll excuse me, the little ghost on my shoulder is being very persistent about getting back to the game.