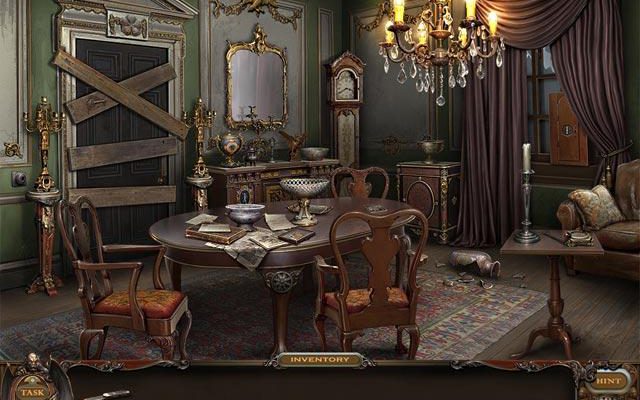 There’s a spooky, abandoned house on the edge of town and we all know what that means: Somebody’s going to bet somebody that they won’t go inside and have a look around. No, it’s not terribly original, but that’s the way it goes in Haunted Manor: Lord of Mirrors, a new hidden object game from Top Evidence Studio that’s actually a quite a bit better than its worn-out opening notes would suggest.

Stan Riddle is a young lad who can’t resist a bet, even one that lands him smack in the middle of a haunted mansion. As he explores the dilapidated halls, our young protagonist discovers a nondescript mirror hanging on a wall, but as he gazes into it, he realizes that the eyes staring back at him are not his own. Without warning, it shatters, and Stan finds his soul trapped in the realm of the Lord of Mirrors. And he’s not alone: As he wanders from room to room, Stan will encounter numerous others likewise imprisoned, some innocent and some wicked, all of whom will help him move closer to escape – for a price.

Like many HOGs these days, Haunted Manor mixes object searches with adventure-oriented gameplay requiring players to interact with their environment in various ways. In one level, for instance, a found tassel is used to pull back a drape to reveal a locked chest which can only be opened by a key that must be pried out of a piece of wood with a knife, which of course the player must find separately.

In most cases the game is fairly clear about what it wants, although there are moments of potential confusion, when a seemingly obvious solution to a problem is completely off-base. For the most part, however, once players catch on to the game’s rhythms, frustration should be kept to a minimum. 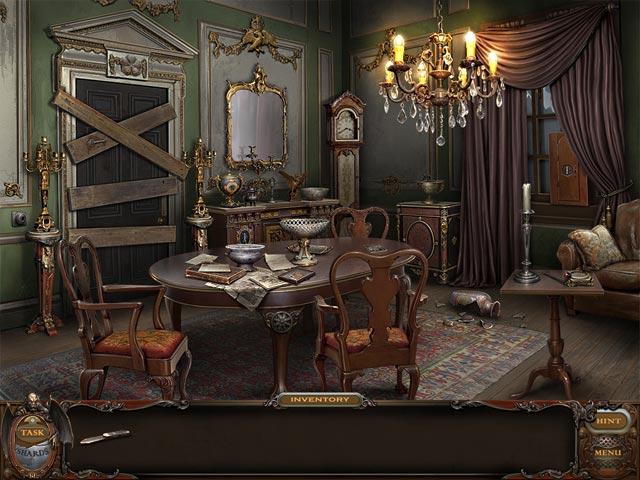 The hidden object searches themselves are fairly routine and not especially challenging, with well-rendered and clearly visible objects that only rarely play the “homonym game. Each room in the mansion has one specific location for hidden objects – a fishing tackle box, for instance, or a pantry shelf – as well as a smaller number of “inventory items” scattered throughout that need to be found in order to complete an objective.

Having only one searchable area per room can feel a bit limiting, but it also mitigates the game’s challenge somewhat, since at least some of the items needed in the second search will have already been seen during the first. A time-based hint option is available, but most players probably won’t need to bother with it very much.

Between levels, progress will occasionally be impeded by other “puzzles,” which I’m said to say are generally the same tired old things we’ve seen in countless other hidden object games. There’s nothing particularly wrong with them; I’m just sick of doing them over and over again in game after game. Do we really need another Towers of Hanoi puzzle or “match the flashing patterns” memory exercise? I suppose some players might enjoy that sort of thing and if you do, you’ll be happy to know that Haunted Manor: Lord of Mirrors has that base covered; fortunately, for those who share my mindset, they can be skipped with just the click of a button.

Like many hidden object games, Haunted Manor tends to get a little repetitious as it progresses, but the high-caliber production goes a long way toward masking it. The levels are very attractive and feature appropriately sinister touches, like twisted shadows or grotesque flashes of souls trapped within mirrors, while the background audio generates a low, subtle ambiance of dread.

The story may not have the makings of the next Stephen King novel, but it does provide enough of a creep factor to make it worth paying attention to. It’s also a fairly meaty game, with a good four to five hours of gameplay awaiting the average HOGger. 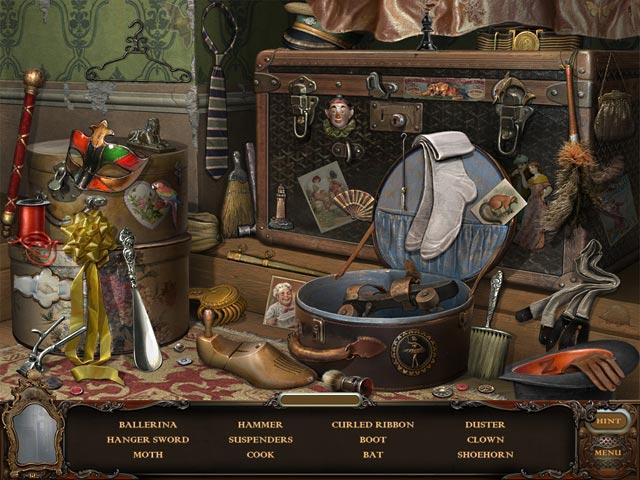 Haunted Manor: Lord of Mirrors comes in two flavors: A standard edition which will be released in the coming weeks, and a special “collector’s edition” which can be purchased now for a premium price. Like most collector’s edition, it offers the usual extras, including a walkthrough, wallpapers, and a secret bonus level with extra challenges and no hints. I don’t want to spoil the surprise for anyone but I will say that the extra level was my favorite part of the game, and it’s a bit of a shame that Top Evidence didn’t put that same level of creative flair to work throughout the entire game.

In spite of that, this is still a very good game. It’s about refinement, not revolution; it doesn’t bring anything new to the genre and it’s not going to stump anyone with devious designs and brand-new brainteasers, but what it does do, it does very well. We may have done it all before, but the high-gloss polish of Haunted Manor: Lord of Mirrors makes it fun to do it all over again.