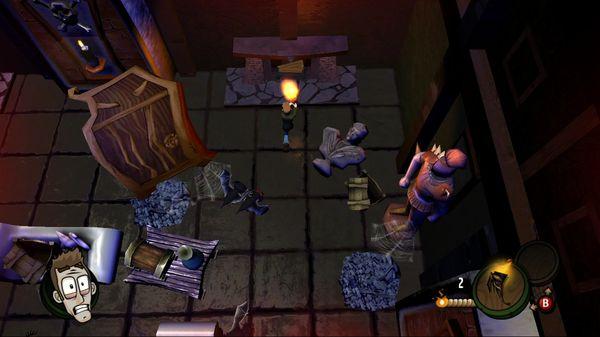 Originally released in 1981 for the Atari 2600 gaming console, Haunted House was an action/adventure game where you explored the rooms of a dark mansion searching for exits while being pursued by ghosts and other creepy crawlies. The 2010 remake gives the game a graphical overhaul and adds some gameplay twists, but not necessarily for the better.

You can choose to play as either the male or female of two siblings. There’s a bit of backstory involving a disappearing grandfather and a note that turns up 30 years later inviting them to a mansion, which of course turns out to be haunted. The mansion has four floors (which make up the game’s four levels), and your goal is simply to find the exit to each floor.

Of course, this is easier said than done. You’ll have to explore each room thoroughly – by searching various boxes, chests and drawers – to find keys that unlock the doors standing in your way. You’re also constantly on the look-out for light sources (candles, matches, cell phones) to illuminate your path, since the rooms are dark by default. Each light source has a limited amount of time before it runs out, so there’s a bit of a “race against the clock” element to Haunted House as well.

The house is inhabited by ghosts and vermin, too, which adds to the sense of urgency. They’ll take off life if they touch you, and the ghost can freeze you for a few seconds as well.

Remakes can make an old game fresh again for a brand new audience. Somehow, though, the changes made to Haunted House, seem to make the game feel more cumbersome rather than more modern. In the original game the rooms of the house were very sparse – just black squares with you, the monsters, and the items (due, of course, to the limits of 1981 technology). In the remake the rooms are filled with decorations and furniture that you’ll simply find yourself tripping over as you try to evade the ghosts. The graphics are the biggest upgrade, but they’re still nothing special by today’s standards. There’s still a repetitiveness to the game, and adding more detail to the rooms actually seems to emphasize this even more. 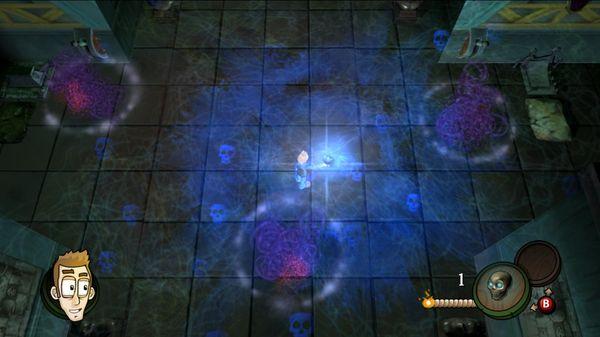 The game’s controls awkwardly combine keyboard and mouse. You move your character with the arrow keys and pick up items with the “E” key, which seems like a totally random choice. If a ghost freezes you, you have to “escape” by shaking the mouse back and forth.

On the upside, there are three levels of difficulty, and if you’re really a completionist you can play the game through more than once with each of the two characters, who have their own voice-overs.

This remake of Haunted House is no doubt hoping to cash in on a bit of Halloween buzz with its spooky theme. Ultimately, though, this is a game that’s stuck in limbo. It was changed too much to cash in on any residual retro nostalgia, but retains its simplistic and repetitive gameplay. In this case, maybe it would have been better to make a sequel instead of trying to give a 30-year-old game a fresh coat of paint.