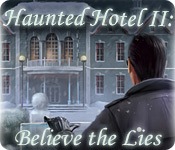 Of the dozens of hidden object games that Gamezebo reviewed in 2008, one that I definitely didn’t expect to get a sequel was Haunted Hotel, a game that we panned for, among other things, poor English, lackluster graphics and numerous technical gaffes. Haunted Hotel II: Believe the Lies is an improvement, but is still hampered by various issues.

Mercifully, the story this time around is presented in short sentences bolstered by fine-looking cutscenes, as opposed to the pages of error-riddled text and rudimentary sketches of the first game. That said, although the story’s grammar is much improved, the plot is no easier to decipher.

A year after the events of the first game, the main character, an FBI detective, arrives at the front door of another mysterious hotel. Through a vague opening monologue, we learn that he’s investigating the hotel because he just “feels” that there’s something wrong with the place.

Apparently that’s as good a pretense as any to go snooping through other peoples’ rooms looking for clues that will implicate them for… something or other. It’s never all that clear what. The hotel isn’t exactly haunted, either — at least not to the extent of the first game where frost formed on the walls and elevators didn’t lead to where they were supposed to.

Gameplay involves searching various rooms for hidden objects on a list, such as tennis ball, oil can and balloon. Some items will be added to your inventory. Once you’ve found everything on the list, you’ll enter the investigation phase, where you have to figure out which object to click on to continue the adventure. For example, in the first room, the welcome desk, you have to click on the guest book. You can take as much time as you need to since there’s no countdown timer, and you’re awarded five hints per scene.

In addition to improved graphics, the mini-games are more varied as well. They can be skipped if the player chooses, which comes in handy if you don’t feel like completing certain puzzles. I found myself using the skip option for puzzles that could only be solved through trial and error, like deciphering a computer code or hacking a fuse box.

While the dialogue isn’t nearly as hackneyed as the first game (because the creators wisely chose to limit the story to short sentences instead of the pages of text) there are still some strange things to contend with, like the command “Increments this value” as instructions on how to solve one of the mini-games.

On the positive side, hidden object scenes are pleasant enough to look at, and each one is themed depending on the profession of its occupant: the musician’s room, for example, features musical instruments and pictures of Bach and Beethoven on the wall. However, items still managed to repeat themselves a lot, and the inventory-based puzzles are all fairly obvious (except for one that involves fixing a car engine, which I found confusing because I know nothing about cars.)

The soundtrack is a mish-mash of different styles, becoming positively atonal in later levels to the point that it was actually making me feel anxious to have the volume turned up. I’m all for pushing the boundaries of 21st century composition, but not when I’m trying to locate tiny erasers and paper clips and need to concentrate.

The game is also quite short, clocking in at a couple of hours. The list of items to find is different on subsequent play-throughs, but mini-game puzzle solutions seem to be the same each time. This coupled with the fact that so many items repeat in the first place, and replay value is limited.

Haunted Hotel II: Believe the Lies is an improvement over its predecessor, but the series still has a way to go to break into the upper echelon of hidden object games.