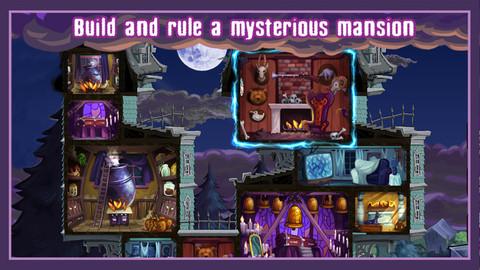 Why should the monsters have all the fun? “They shouldn’t,” is the correct answer to that question. In Haunted Hollow, now really and truly released on iOS by Firaxis and 2K Games, you get to share in the fun by building your own haunted house and unleashing monsters on an unsuspecting town: only someone else is trying to beat you to the punch in this fun and accessible, if slightly shallow strategy title.

I’m not aware of competitive scaring being a thing, but it could be now thanks to Haunted Hollow. The setup is simple: a small town is stuck in between two haunted houses, both capable of pumping out monsters to scare the town’s citizens. You take over one of the spook factories, aiming to win the game by frightening every house in town before the other side can do the same.

Sounds simple, but you have to start small. On each turn, you can add a new room onto your house, and the strategy starts there since placing rooms of like-types together can eventually allow you to produce more powerful monsters. You also have a pool of fear points that needs to be rationed wisely since they’re needed for creating monsters and any actions they undertake.

The most important of these actions is scaring, something Scary monsters like the Ghost and Boogeyman can do for you. Scaring a house puts it under your control, and controlling a whole neighborhood of two or three adjacent houses adds an extra fear point to your pool on subsequent turns. Of course the other side is attempting to stop you from doing that, and there’s some Monopoly-like thinking that needs to be done on the fly to determine if it’s better to finish off a neighborhood or hop over and wrest control of a house from your opponent.

And there are other complications. Every scared townie runs off to the church, helping to fill a meter that measures the public’s anger. Once it’s full, a torch-bearing mob emerges that slowly roams the streets destroying monsters and burning down houses, removing them from play. 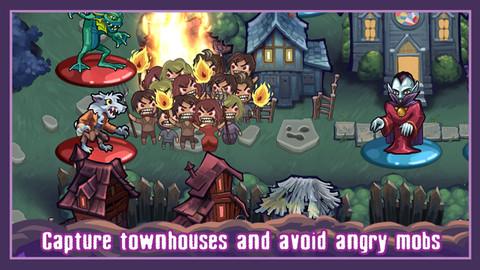 Your solution to these threats is to crank out Fighty (the game’s word, not mine) monsters like Werewolves and Reapers that can attack opposing monsters or even the mob, if you’re feeling especially tough. Firaxis also did a nice job inventing special abilities that fit various monsters’ classic traits. Vampires can turn vanquished foes into bats under their control, Sirens can charm enemies into doing their bidding, Zombies can turn into a shambling horde, and so on. You’ll find a way to put all of these powers to good use as you play more matches.

Single-use items earned by leveling up through successful scares and attacks can also turn the tide. Houses can advance up to level five in each match, with a new item awarded at each tier. The only negative is that the selection of items is limited, as some are only available if you pay to unlock them.

That’s a problem with Haunted Hollow as a whole: too many goodies, including a whole bunch of extra monster types, are for paying players only. There is a “Season Pass” option to unlock everything for one price, but the monetization system could easily nickel and dime players into spending more. Having extra unit types in a strategy game like this also drifts toward “pay to win” territory.  As Mr. Horse would say, “No sir, I don’t like it.”

There’s a legit question of depth as well. Playing against the AI or another player on the same device are both welcome choices, and asynchronous play through Game Center works well thanks to alerts when it’s your turn, freeing you to do something else in the meantime. But there’s only one town layout, and the single-player Challenges aren’t explained well and don’t add much to the overall package. 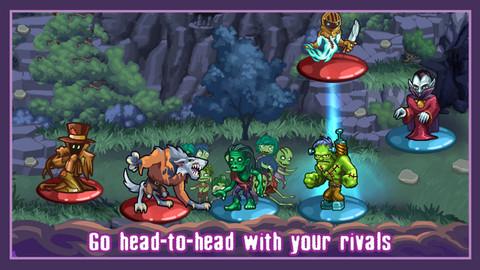 Happily, that package does give free and paying players alike some good stuff to see and hear. Despite their in-game jobs, the monsters are more cute than frightening, and my four-year-old son had no qualms about watching me play. The soundtrack fits the game perfectly, evoking classic haunted house imagery as soon as you hear it.

Haunted Hollow has so much going for it that it pains me to say that it could be even better. It’s a five-star concept that ends up something less in execution because of poor design choices, but that shouldn’t scare you off from giving it a free download and seeing if it matches your idea of a ghoulish good time.