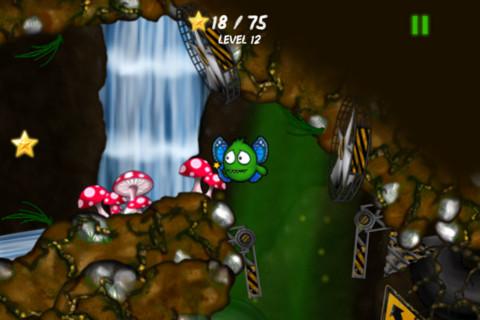 Harry the Fairy escapes hairy situations, but isn’t quite magic

For many, iOS games are an escape during those brief few moments that their feet aren’t touching the ground. An awaited offering in the App Store finally touched down recently, but promised to keep gamers floating. Harry the Fairy, a game about an oft-nervous looking pixie, is looking to be the next big star in the world of iOS gaming. But there might not be enough air under its wings to propel it that high.

It shouldn’t surprise you to find out that you’ll be playing as Harry, a free-floating, wand-carrying fairy in the latest offering from Chillingo and developer Zaxis Games, Harry the Fairy. His adventure will have you traveling through four chapters, each seven levels in length, in attempts to rescue his caged friends.

His movements are controlled either by the tilt method or by virtual joystick. Both options work well and it really becomes a choice of personal preference. The joystick became my go-to for navigating the cramped caverns of the game, but either option functions with equal amounts of precision.

You’ll want to make sure that you’re comfortable with whatever control option you choose because you’ll be using it to make your way through some narrow pathways on your way to collect stars–and also save your friends that are trapped, hanging in cages. But get the stars first!

The levels of Harry the Fairy aren’t just a bit of a maze that will send you for a loop on your search for fellow pixies, but are also scattered with significant obstacles that will throw a bit of a wrench in some of your flight paths. The most prevalent obstructions include drills that hide in the walls of the caves and pneumatic poles that shoot out from the ground. There’s also the occasional wind tunnel that will speed up Harry, but can also put him in some hairy situations. The levels hold some natural danger as well, especially once lava is introduced. Lucky for Harry, bubbles act as armor and gives him a second chance if he gets caught too close to a spinning saw blade.

The level design is well done, but somewhat lacking in variety. The game starts you in slow, introducing most aspects in solidarity as to not overwhelm. By the time you’re ready to take on everything, it’s ready to throw it at you. The problem is there isn’t much to throw. And while the game sprinkles in the occasional puzzle to spice things up, these really act as nothing more than a short delay in time and detour in route than any sort of challenge. The majority of the puzzles are lever based or involve launching a rogue barrel to a particular platform. It’s a way to drag out what is an otherwise short title, sitting at four chapters with seven levels a piece. Even with the extended challenges, the game goes by quickly.

Luckily for the level designers, being delayed in the grottos isn’t such a bad thing thanks to some stunning visuals. The levels really pop on the screen, and it is admittedly worth a look around to enjoy the sights. That is, until you realize that you’re seeing a lot of the same. Some of the visuals become redundant and you’re not likely to remember one level over another because of any unique landmarks.

The audio of the game is perhaps its most impressive feature. The soundtrack is definitely worth noting, with an orchestral score sound that adds to the mystifying feeling you would expect from a game about a whimsical fairy. This isn’t a game you’ll want to mute, and the song from the title screen and the missions are sure to get stuck in your head without too much exposure to them.

There is no denying that Harry the Fairy is a well-polished title but perhaps someone polished too hard and some of the internal workings are showing. The game follows a formula to a tee and doesn’t stray from it. The controls are great, the audio and visuals are solid, the gameplay offers light challenges and solid design. Everything works how it’s supposed to, but there is no “above and beyond.” It’s exactly what you’d expect and nothing more. Harry the Fairy is a good game, but its lacking in anything magical.