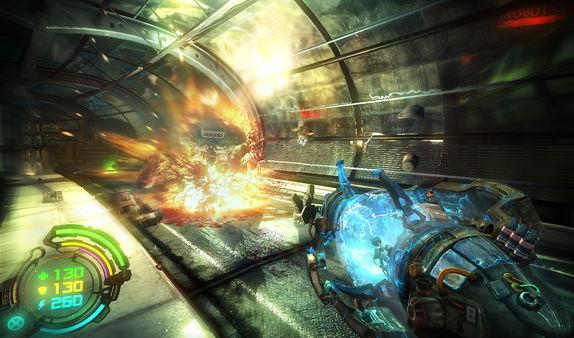 First person shooters have gotten really complicated in recent years. It seems like what makes fun and why they rapidly gained popularity in the first place has gotten lost over the years: shooting. To have a first person shooter that focuses on action and shooting is considered “retro” these days. Well, my friends, I’m here to let you know that if you’re looking for a “retro” shooter that bleeds action and spares no bullets then look no further than Flying Wild Hog’s Hard Reset.

I wouldn’t really expect much less from a new dev team’s first release if a bunch of those folks worked on a game like Painkiller, which at its time was considered a “retro” shooter as well. It’s a fast-paced game that throws a lot of enemies at you, gives you fun guns to play with and strips out a bunch of unneeded nonsense. Story takes a major back seat here. Sure, there’s one there if you’d like to try and follow it but all it really did for me was hold me up from shooting more robots.

The most interesting thing about Hard Reset, outside of its pedal-to-the-metal action, is a “gun within a gun” approach to your weapons. You start off with two basic weapons: one that can shoot bullets and one that shoots electric energy. Each of these base weapons can be upgraded, using credits collected throughout the levels, to transform each into any of another five types. Each of the five types of weapon can be upgraded two other times to give it different abilities. Your character’s suit can also be upgraded providing things like an increased health meter or a higher bullet capacity.

Hard Reset isn’t 100% about being retro, the visuals in this game are gorgeous with excellent lighting, nice textures and great effects. Lots of things blow, tons of sparks fly all over and it all looks awesome. A good time can also be had playing with some of the physics and environmental possibilities for blowing up the malfunctioning robot enemies. The developers built this engine from the ground up intending it to be used only on PC and specifically aimed at lower end systems. When most other developers are shooting for the most advance tech to push everything it’s nice to see a new team thinking about a wide audience without skimping on quality. 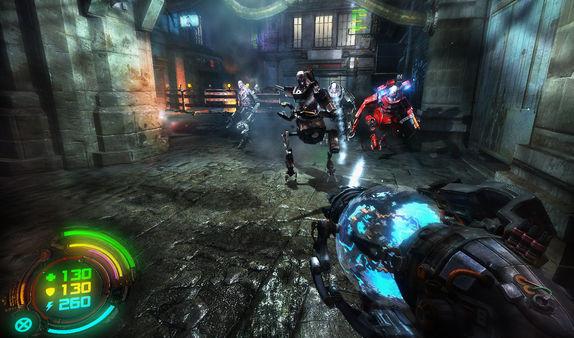 Usually I have some complaints about a game and while there’s almost nothing about this game that bothers me it’s worth pointing out some things that will probably bother other people. The game is pretty short, roughly about four hours or so. While it’s a “budget” titled at $29.99 the lack of multiplayer will probably give some pause before purchasing. It’s also extremely linear to the point where you actually spend a lot of time in hallways and alleys blasting your way from one end to the other. In a world that’s getting more and more used to everything being a sandbox those who aren’t interesting in going from Point A to Point B without Point C, D and E existing need not apply.

Make no mistake, Hard Reset is an excellent first title from a new developer who knows exactly what they’re trying to do and who they’re aiming for. The fun transforming gun mechanic, excellent visuals and low hardware barrier of entry should entice any PC first-person shooter fan worth their salt.