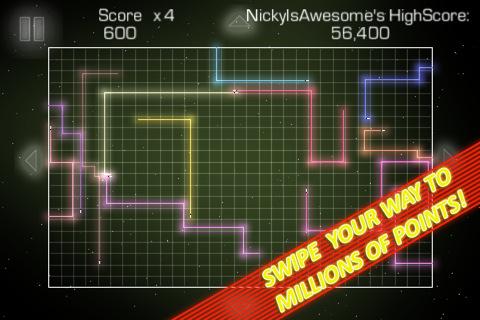 Hard Lines is the ultimate game of light cycles

Nutshells are good, but to really appreciate a nut, you have to crack them open to enjoy their tasty innards. If I’ve done my job even half as well as I’d hope to, you should get a good idea of just how delicious those nutty innards can be.

For those not in the know, the light cycle gameplay that inspired Hard Lines dates back to the arcades of 1982. One of four games in the TRON arcade cabinet, light cycle racing pitted two players against each other on a grid as they controlled virtual motorbikes that created a wall of light behind them. The object of the game was to weave left and right, up and down, until eventually your opponent crashed into one of these light walls (either the one you created, or their own). In many ways, it was a lot like a multiplayer version of Snake.

Hard Lines takes this light cycles concept and uses it as a base from which to build something bigger. Well maybe not bigger, but certainly more complete. The developers at Spilt Milk Studios have dreamed up every possible variation on this concept, and they’ve tied them all together into a single package.

Modes range from a basic game that recreates the original light cycle feel, Survival mode, to the overwhelmingly massive Gauntlet mode which pits you against more than a dozen other light cycles at the same time. There are also two variations on a time attack mode – one in which a timer counts down from 3 minutes to zero, and one in which each kill will add seconds to an ever ticking clock.

More than just survival, though, Hard Lines is a game that’s also about netting a high score. In addition to earning points for every kill, players will be able to collect shiny things that appear at random in an effort to boost their numbers. In one mode called Pinata, these shiny things will burst from the corpses of the lines you’ve killed, letting you eat up their yummy insides in your quest for points.

But as fun as all of these previous modes are, the most fun to be had in Hard Lines comes from a totally traditional and soiltary game of Snake. With no competing lines around you, your humble yellow line quickly turns his personality from aggressive to downright affable. He makes jokes, he shares his feelings – he tries to connect with you on a personal level. And while there’s no social interaction on your part to prompt him along further, the whole experience reminded me of great interactive experiences of the past like Seaman. There’s just something so infinitely likable about a little yellow line desperate for your attention. It’s downright adorable. 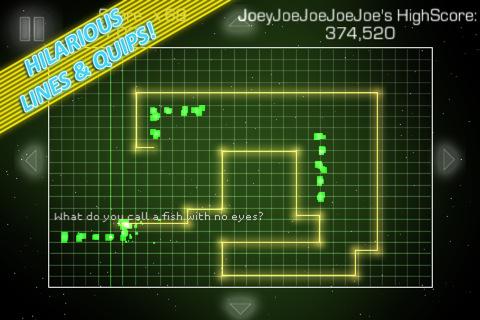 Of course the humor and personality aren’t strictly confined to the Snake mode. During his more combative experiences, your line doesn’t shy away from being chatty. Whether it’s one liners or taunts to his opponents, your little line is happy to do all of the talking for you. His competitors, too, have a penchant for wise-cracking.

If it weren’t handled right, something like this would quickly get aggravating. Thankfully the writing is spot on, and even when you see some text that’s popped up before you can’t help but smile.

The rest of the presentation is terrific as well. There’s not much you can do with a game about directing lines inside a rectangular box, but the glowy Geometry Wars vibe and thumping electronic soundtrack are a perfect match for the gameplay.

As a fan of TRON light cycles, I found very little to complain about. The only thing I would have liked to have seen different would have been the inclusion of a multiplayer mode. Even if it was only local, head-to-head light cycle duels would have gone a long way to scratch that TRON-shaped itch.

Try as you might, there just isn’t a bad thing to say about Hard Lines. In taking a classic concept and packing it to the brim with personality and playability, Spilt Milk Studios has developed an absolute winner through and through. If you’ve ever enjoyed Snake, TRON, or talking lines, make this one your next purchase.