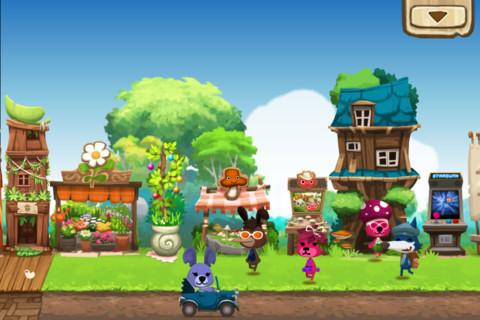 Mobile games are a strange animal. Unlike console games, where it’s easy to form a solid opinion upon completion, much of your opinion is formed in-between plays. More specifically, it’s based on how long you can go before playing again. In that area, Happy Street is a massive success. Minor issues aside, it’s everything I could hope for in a mobile sim and, cliche though it may sound, I’m having trouble focusing on this review because I’d rather be playing it. My life is hard.

In Happy Street, you’re in charge of building and maintaining a — believe it or not — street. You begin by building a home for yourself, but the arrival of new villagers forces you to begin constructing homes and businesses for them to enjoy. The more you build and the better you take care of things, the faster your street will grow. It’s a lot to manage, but the game does a good job of delivering it all in a very digestible way.

With all of that said, I feel an obligation to acknowledge the similarities between this game and Animal Crossing before moving forward. There are some definite comparisons to be made, from the cute aesthetic to the chipper animal villagers, but Happy Street doesn’t steal the concepts of Animal Crossing wholesale, and even manages to contribute a few interesting elements to the formula.

The biggest difference comes in the level of control. While your actions informed the trajectory of your town in Animal Crossing quite a bit, you play a much heavier hand in what’s going on in Happy Street. As your village levels up, you earn the ability to put in new shops and upgrade existing ones. On one hand, this gives you something to always look forward to; on the other hand, it means you’ll frequently have to wait before making your next big move.

Like most sim games in the mobile space, Happy Street has a lot of cooldown periods. They’re brief at first, but they grow in length as you progress. One would hope you’d amass currency at a similar rate, and thus be able to buy your way out of the lion’s share of waits, but that’s not quite the case. While you’ll be able to skip certain things, you’ll oftentimes have to either wait or throw the game a few bucks if you want to do something major. 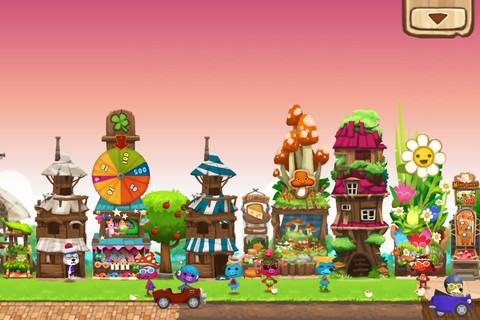 To that end, I had no real issue with giving Happy Street some money. It’s incredibly polished on both a visual and mechanical level, and it was never obtrusive about trying to get me to open my wallet. In fact, if memory serves, it never even mentioned the fact that I could purchase additional coins and Flooz (the currency you spend to speed things up and clear foliage to increase your land) via in-game store.

But despite the quality of the game’s core concepts, it’s not without its problems For example, you can only converse with your villagers when they want to do something like provide you with a quest. You can’t just approach them and discuss the weather or regale them with tales of that massive salmon you bought. As such, it made it a little more difficult to relate with my fellow villagers on any sort of powerful level.

As sad as I was about not being able to talk it up with my neighbors, I found myself completely addicted to Happy Street. In fact, I’m still addicted to the game. I fire it up several times a day, each time just as excited by the prospect of building an awesome street. With its easy-to-understand gameplay, charming music, and gorgeous (seriously, they’re amazing) graphics, the game has quickly become my go-to sim game on the iPhone, and I see it remaining as such for months to come.