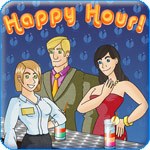 Congratulations! You’ve just won the Bar-o-Matic lottery! You’re now the proud own of the Cocktail-o-Matic 6000, an experimental cocktail-mixing machine and a rundown bar called John Doe’s.

And so this is how iWin.com’s Happy Hour begins, a new downloadable micromanagement “serving” game a la Diner Dash or Burger Island – but this time you’re slinging cocktails instead of food. The end result is a “refreshing” bartending simulation that proves both fun and challenging.

The game-play works as follows. You’re standing behind a bar, in front of the Cocktail-o-Matic dispenser, and fulfilling drink requests when a customer saunters up the bar. Instead of serving familiar cocktails, such as a martini, customers merely ask for a specific color combination, as seen as a drawing in a kind of speech bubble. For example, you might have a guy who wants a red and yellow drink. It’s your task to make the desired cocktail before he or she leaves out of impatience. To use the Cocktail-o-Matic, you place a clean glass under one of its dispensers – and you’ll see which colors will pour out of it – and then pull the handle. If you make a mistake you can pour it out and start again or place the glass off to the side and hope a future customer will want that particular color combination. Or you can pour the contents of the glass into another glass, should you need that color. A flashing liquid is a kind of wildcard that can be used for any color you need.

When your cocktail has been prepared, you serve it to the customer, who will then excitedly say something like “Champion!” or “Stunning!.” Pick up your tip and get ready for more drink orders. As with real bartenders, you must multitask because multiple customers line up at the same time. You can buy some time (and increase your tip) if you can pluck peanuts off the small conveyor belt and place it in front of a customer who is waiting for the cocktail. Other extras begin to appear, too, such as a music CD, to chill out impatient patrons.

After every round you’ll be given the opportunity to purchase new items for the bar. With John Doe’s, the first bar you’ll own, it could be everything from bathrooms and dartboards to a stereo system and additional shelves to hold incorrect drinks.

Before you know it, you’ll be slinging drinks like the pros, raking in the tips from happy customers – and after eight levels or so – move onto another bar with a unique look, different kinds of customers and add-ons, and other goodies to keep the game fresh and fun.

While we raise our glasses high for Happy Hour, it’s not without a few faults. For one, some technical bugs cause odd things, ranging from curious (music just stops playing) or annoying (having to restart the game after it was paused because the mouse wouldn’t click on the word “Continue”). Secondly, you must click on items very precisely (such as glasses, the machine spout or in front of the customer), so this can be frustrating as you might only be off an eighth of an inch. Lastly, while the music is enjoyable – consisting of catchy songs from a female-fronted band – the same three songs or so play over and over again; a soundtrack with no singing or many more songs or the ability to import you own MP3s would cut down the repetition.

Despite these annoyances, Happy Hour is a fun micromanagement game with lots of character and plenty of replayability. And hey, no I.D. is required.