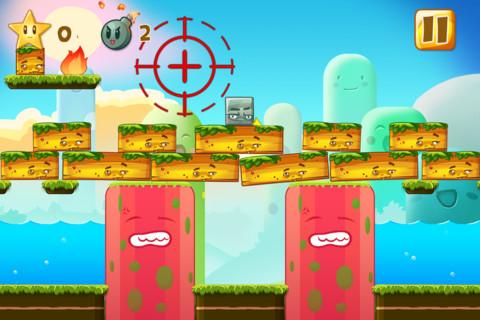 Welcome, fair traveler, to the land of Happy Hills! As you can see, this is a place that everyone will love, once we’re able to get rid of those gosh-darned blocks sitting on our hills and literally keeping them down. If you’d be willing to help us get rid of those things, we’d be eternally grateful, and we’ll even let you remove them as violently as possible. Hey, if we’re going to saddle you with a pest-removal gig, we might as well let you have some fun doing it.

Happy Hills is a new physics puzzler on the App Store that takes place in a world where everything is apparently alive and has a personality. The titular hills, however, aren’t too happy right now, because there are blocks sitting on top of them, literally pushing them down and causing them an undue amount of stress and strain. As a result, players have to free the hills from the blocks with the only appropriate tools for this kind of scenario: high-grade explosives.

The gameplay is pretty simple on the surface. Tapping the iPhone’s screen sets off a bomb that launches blocks in corresponding directions based on the bomb placement. The closer a bomb is to a block, the direction and distance it will fly in is indicated via on-screen arrows. In order to pass a level, all players have to do is get the blocks off the on-screen hills, but they also receive a star rating based on how many blocks they destroy.

Destroying blocks is accomplished in different ways based on what they’re made from. Blocks made from stone or metal can be drowned, while wooden ones can be burned to ash, and all of them can be knocked off the map into bottomless pits (when they appear on a map). However, different materials also have different attributes: Fire will heat up metal blocks, which can then be used to set the wooden ones on fire. Wooden blocks, meanwhile, float on water (which will also extinguish any flames). Later levels take advantage of these elements and force players to come up with creative solutions to puzzles that include multiple block types.

The gameplay is quite a lot of fun. Part of this is because levels are rarely so challenging as to be unbeatable, but earning a perfect score is a lot easier said than done. The interface is pretty easy to get ahold of, and the play mechanisms all work pretty flawlessly. The on-screen force/direction arrows are a particularly inspired feature that makes things much more enjoyable without dumbing them down too much. 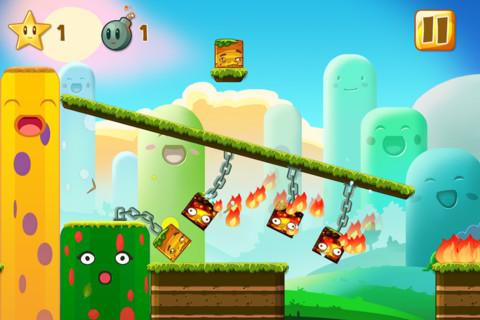 Visually the game is also lovely thanks to all of its personality. It’s literally infused into every corner of the title: hills and blocks both have faces that change expressions and are pretty darling to look at. On top of that, the colors are bright and cartoony, and the graphics fully take advantage of the iPhone’s Retina display. There’s a lot to appreciate here, and the game’s visual style never gets boring or repetitive.

Happy Hills is a great little title. It’s fun to play, its levels are easy to beat (most of the time), and it features some seriously adorable style. On top of that there are a lot of levels to play through, which means players aren’t likely to get bored with it. As puzzle games go, Happy Hills is certainly a winner.