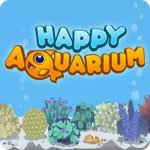 When it comes to aquarium games on Facebook, Happy Aquarium is easily the biggest fish in the sea. With more than 28 million players every month as of this writing, it’s not only the most popular aquarium game – it’s the 5th most popular app on Facebook. And yet despite these massive numbers, once you get ankle deep in tank water you can’t help but wonder why anyone would find this relatively shallow offering so appealing. Happy Aquarium may be the biggest fish in the sea, but it spreads itself too thin to be considered the best.

Happy Aquarium, unlike many of its chief rivals, is a game that doesn’t take itself too seriously. Cartoony visuals and forgiving game design make this an experience well-suited to gamers who don’t have the time or patience to commit to the massive fish farms of Fish World or Fishville. While much of the game shares common themes with other aquarium sims on Facebook, Happy Aquarium does a good deal to set itself apart and create a truly unique experience.

Getting new fish, for example, can be tackled in a far more natural way than visiting the in-game fish shop. Sure you can buy them in the store if you want to, but Happy Aquarium also allows you to mate fish to produce more eggs. It’s a little touch, but it’s a nice way to fill your tank without having to spend in-game coins. Plus it leads to an adorable little mating dance animation, and who doesn’t love to see two little fishies in love?

Unlike other games that are only about breeding and selling, Happy Aquarium also includes a number of mini-games that give the genre some much needed variety. In a surprising twist for a game of this nature the mini-games are somewhat action-oriented. Hunting treasure, for example, will have you guiding a fish of your choosing around and through coral and other obstacles on the hunt for an elusive chest. Training your fish, on the other hand, will have you clicking on hazardous obstacles to remove them as your fish tries to safely navigate his way to the finish line.

Spicing things up like this is a welcome change for aquarium sims, but the games included in Happy Aquarium failed to really excite us or hold our attention. An A+ for concept, but a C at best for execution. The mini-games themselves aren’t terrible, but they’re overly simplistic and get repetitive fairly quickly. Considering you’ll need to play them over and over again, it would have been great to see some variety. We love the idea of mini-games in an aquarium sim and praise developer Crowdstar for introducing them here, but the light and repetitive gameplay offered by each really rob the experience of its intended goal.

This sort of repetition and ease of gameplay made Happy Aquarium feel shallow despite the breadth of content that the game offered. It would be impossible to argue that Happy Aquarium somehow offered less gameplay than its competitors, and yet it feels like it does despite evidence to the contrary. Add to that fish that never seem to die and can be sold at any time, and you’ve got a game that skews far too much into the “beginner-friendly” category to have a lasting appeal.

Maybe it’s best to view Happy Aquarium as a starter fish tank rather than a full-size 30-gallon behemoth. We applaud the initiative in taking a different direction than many of its competitors, but the game sometimes flubs in its execution. While we hate to argue with popular opinion, it turns out that 28,000,000 Happy Aquarium fans can be wrong. It’s a shallow experience that may hold some appeal for part-time players, but for the rest of us who want a fish game to catch us hook, line and sinker, Happy Aquarium floats belly-up at the top of the tank just waiting to be flushed.