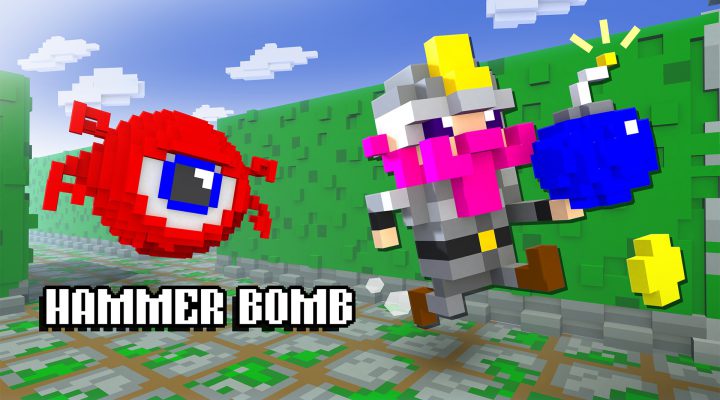 The voxel visual style is great

Pop up ads are annoying as per usual

I’ve actually been playing Hammer Bomb on and off for the better part of a month (via various pre-release builds). Not that I think it ultimately matters, but transparency and all that.

The core game hasn’t really changed all that much since I first laid eyes on it (more features have been added and a few things tweaked, but that’s about it), and that’s totally fine because it didn’t really need to change in the first place.

Hammer Bomb is sort of like this strange amalgamation of a roguelike and first-person PAC-MAN. Your character will start walking forward as soon as you tap the screen, with swiping used to determine things like turning and jumping. They’ll only come to a stop if they run into a wall or throw a bomb. Otherwise they just keep moving as you wind your way through the various randomly-generated dungeons. 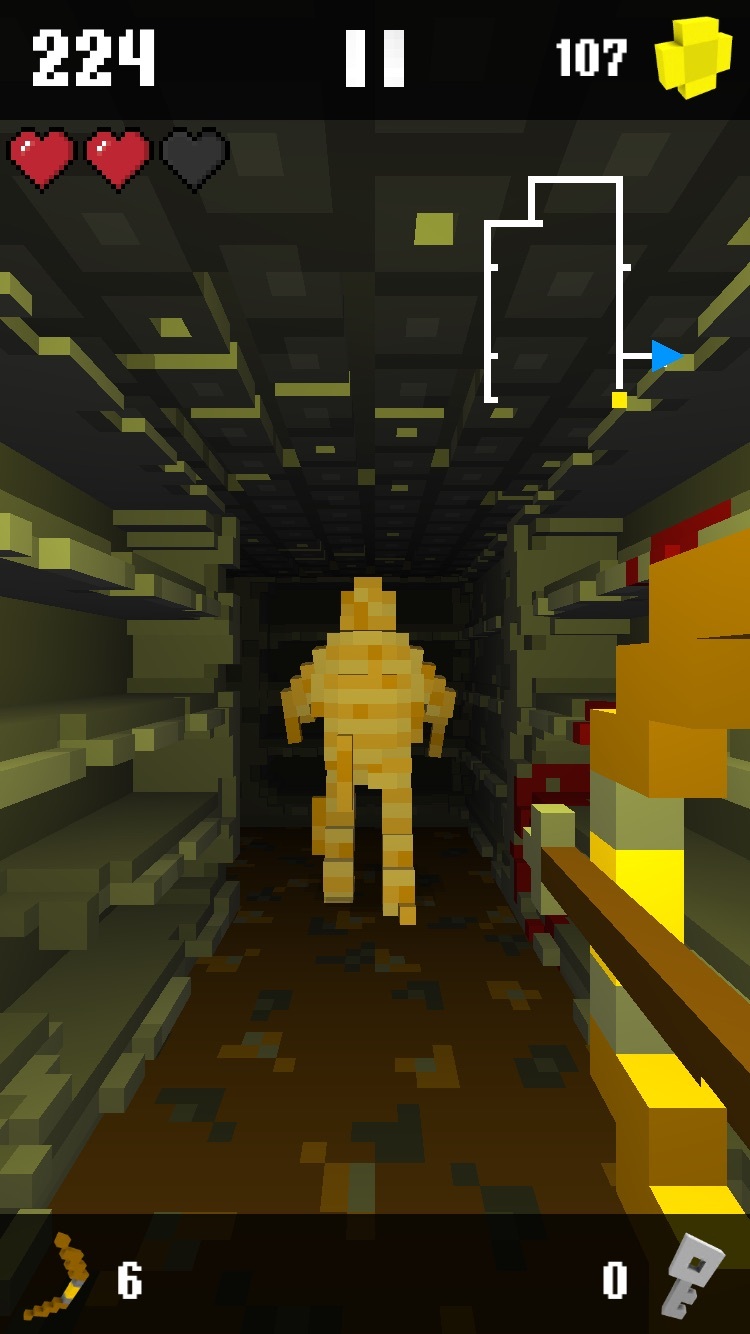 This is where everything else comes together. Each dungeon is like a small maze, with the occasional dead-end and even a few secrets hidden behind destructible walls. As you wander around you’ll start to automatically fill out a map of the floor you’re on, as well as stumble upon things like treasure chests, magic crystals, and enemies. Chests usually contain things like money (used to buy permanent character upgrades), keys (for opening cell doors and freeing captured warriors), weapons (for defeating monsters and maybe blowing up walls), and quests (I don’t know), while magic crystals are necessary for earning larger experience boosts and leveling-up faster.

All told, it’s really easy to get into, and it can be ideal for short (or long) pick-up-and-play sessions. Even if you don’t make it terribly far you’ll still keep the gold you earn along the way, which can then be used to buy (or save up for) more upgrades — which I’d definitely recommend, as having the ability to see enemies on the mini-map or carry two different weapons can make a massive difference in your game. 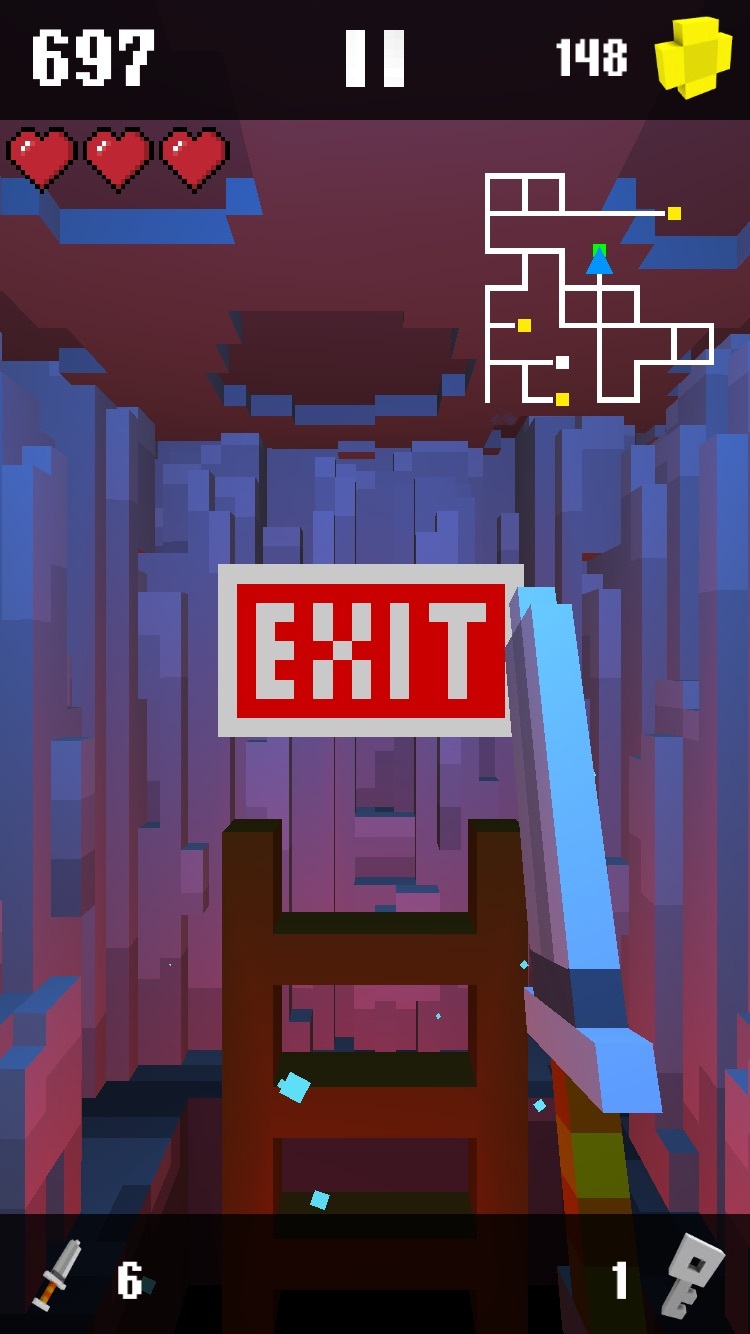 The enemies that patrol the mazes are where I get the biggest PAC-MAN vibe – well, that and the coins that line the floor. They’re almost all functionally the same (i.e. they wander back and forth, and will damage you if you touch them), though some are faster than others. Still, the variety they lack in gameplay they more than make up for in visuals. In just a few of my more recent playthroughs I’ve seen mummies, giant floating eyeballs, bats, giant wasps, giant snakes, and something that looks like a Gremlin (like in the movies).

The environments are pretty diverse, too, with dank catacombs, ancient libraries, outdoor gardens, and so on. It’s a good looking game. Hammer Bomb uses its voxel graphical style to great effect.

On the downside, the random level generation doesn’t quite manage to avoid the pitfalls of randomness. It works well for the most part, but sometimes you’ll end up with a cluster of enemies in an area you can’t avoid or reach a floor with multiple cell doors and zero keys. It’s pretty much par for the course when it comes to random game stuff, but it can still be bothersome on occasion. As can the pop-up ads, though they are admittedly not as frequent as in other free-to-play games. Or you could remove ads entirely with an in-app purchase.

Hammer Bomb is pretty darn fun, all things considered. It’s simple, sure, but it also has some nuance to it – and you always feel like you’re getting somewhere. PAC-MAN would never survive a maze quite like this.