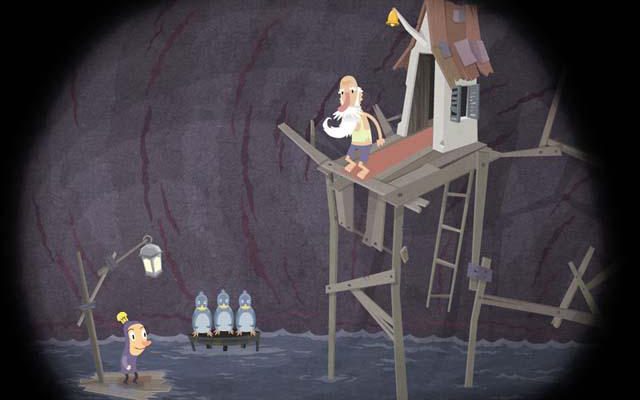 Mif2000’s Hamlet is certainly a game that marches to the beat of its own drum, and as a result you’ll be chuckling at its humor and creativity one minute and cursing some its more inscrutable puzzles the next. Regardless, this off-kilter ode to one of Shakespeare’s most famous plays is nothing if not creative and fresh.

The plot of Hamlet the game is more streamlined than that of the play – in fact it’s basically all laid out in the first story panel. The evil king Claudius, with the help of his assistant Polonius, has killed the king and queen, seized the crown, and forced Hamlet’s girlfriend, Ophelia, to marry him.

Hamlet is preparing to seek his revenge and rescue his girl when a time-traveller’s ship – piloted by you – accidentally crashes down from space right on top of him. With Hamlet down (but not out), you’ll step in as the time-travelling Hero to put a stop to Claudius and rescue Ophelia. 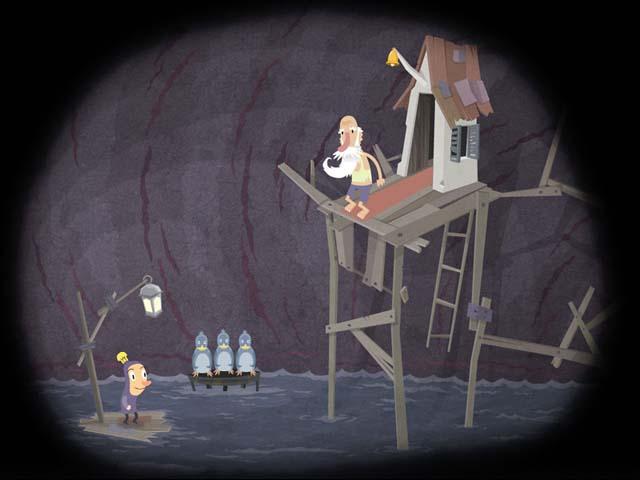 The game is divided into five Acts of puzzle-driven adventure gameplay where the goal is often to simply find a way to move from one side of a room to the other and exit by figuring out which objects you need to interact with to solve the puzzles that are in your way. Of course, things are never straightforward.

Alawar (Hamlet‘s publisher) has compared the game to Amanita Design’s Machinarium. While the art style of Hamlet is much different – colorful and whimsical in contrast to Machinarium‘s darker industrial tone – the gameplay is similar in that your character is simply plunked down into a scene with little obvious indication of what to do next, requiring players to pour over the environment itself for clues about which objects can be interacted with.

The puzzles in Hamlet are true brain-teasers, and very creative: there are no lazy Hanoi puzzles, memory match games or jigsaw puzzles here. Instead, you’ll find yourself solving a combination lock by deciphering the sun’s facial expressions, or connecting pieces of a road map to form an escape route – while an old man keeps stealing pieces of the map and putting them back in a different order!

The solutions to some of these puzzles border on the ridiculous at times, and they can’t be truly skipped (although there are hints). While this might cause frustration, there’s a real sense of accomplishment when the solution finally “clicks” and you’re able to move on. 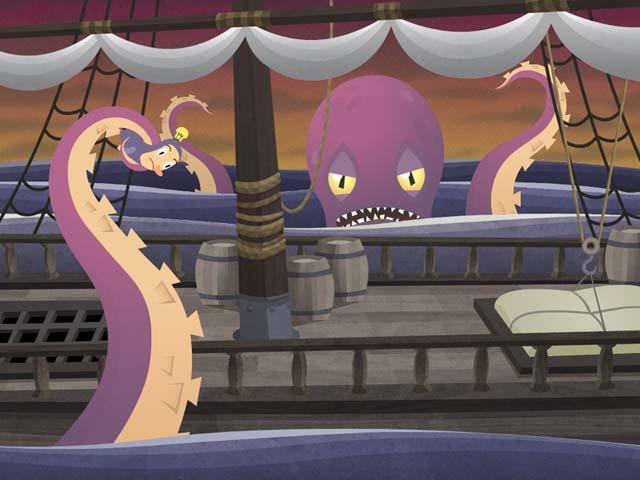 Something else that might frustrate players, however, is the fact that certain puzzles rely a little too much on reflexes. This is especially true of the “boss battles” that cap off each Act and often require players to click on things in rapid succession with very little time to react. (Note: an updated version of the game has since been released that makes these challenges a little less frantic.) There are a few small technical niggles as well, such as the absence of a Windowed mode and the fact that you can’t click on thought bubbles to automatically advance speech.

Hamlet is quite a short game, too. In fact it seems to rely on the difficulty of its puzzles – and the assumption that you’ll get stumped for lengthy periods of time – to add to the game’s play time. If you manage to overcome the puzzles and boss battles fairly quickly (or if you cheat and use a walkthrough), don’t expect more than an evening’s entertainment from the first play-through.

Sure, Hamlet isn’t without its flaws and quirks, but it has its share of enjoyable, unexpected moments too. Anyone who isn’t afraid to dive into something a little different – and who is patient and curious enough to put up with getting stuck along the way – should at the very least download the demo to see what Hamlet is all about.