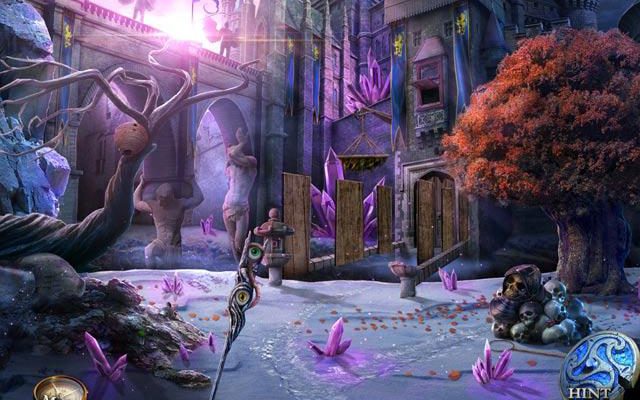 Will Hallowed Legends: Ship of Bones set sail, or sink to the bottom of the sea?

When I first sat down to write this review, I couldn’t for the life of me remember the name of the game I had just played. But that’s the kind of experience that Hallowed Legends: Ship of Bones turns out to be: a forgettable romp through familiar terrain. So much about this hidden object adventure is lost to its generic settings and gameplay that it leaves the whole package feeling more “hollowed” than “hallowed.”

At its best, the story of Hallowed Legends: Ship of Bones is a bit shallow and underdeveloped. You play as an unnamed adventurer whose plane crash lands over a dark and haunted village. But when you come upon the injured pilot, Henry, your companion’s soul is ripped out of his body by some evil ice queen, so you take it upon yourself to free him and all the other lost souls of the island. I’m still not sure I’m sold on the growing trend of using live actors in hidden object adventures, but the ones in Hallowed Legends: Ship of Bones are actually implemented pretty nicely into the cut scenes, and they never come off as overacting or downright ridiculous. 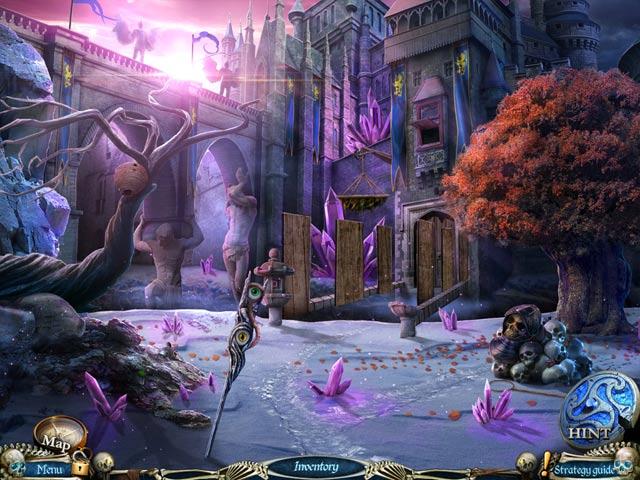 As you progress in the game, you’ll also get some historical background about the Vikings and the ancient origins of the Ship of Bones, but the failure to establish any real relationship between your character and Henry, coupled with your complete lack of surprise at any of the terrifying things that are going on around you, make the whole thing just seem a bit silly and aimless. But that’s not all that feels a bit off here. You’ll also meet a few living skeletons along your quest who go about their day performing menial chores, and don’t seem all that fazed about being dead or anything. One skeleton is in need of some spare change, while another wants a rake so he can clean up his yard. I just thought that was kind of strange coming from a skeleton and all, and just another thing that pulls you out of the immersion in the game world.

The dreary setting of Hallowed Legends: Ship of Bones is rather small, with maybe 20 or so total locations for you to explore from beginning to end. However, instead of being designed as a compact and tightly-knit adventure, the game ends up feeling restricted and needlessly cluttered. Because of this clutter, interactive areas are often placed really close together, and it’s easy to overlook two searchable spaces that are cramped side by side, in mistaking them for one. The hint systems in the game also leave something to be desired. Instead of simply pointing you in the right direction or giving you a visual clue, clicking on a hint will simply unlock the next part of a cold text walkthrough on the screen, along the lines of: “Go to Point A. Use Item B on Item C, because XYZ.” 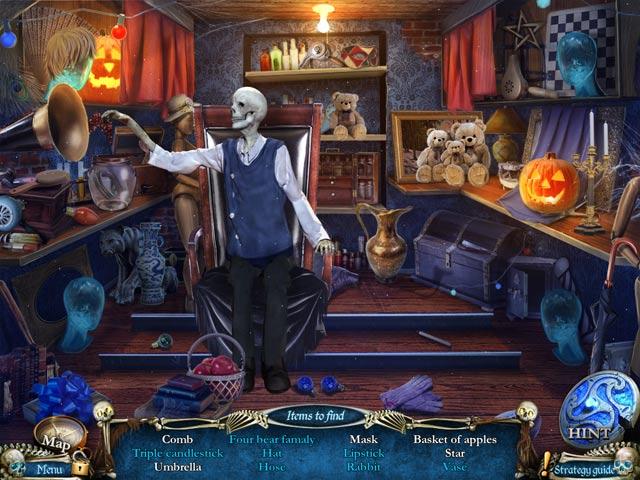 The settings are all probably something you’ve seen before in any number of hidden object games: a graveyard, a town square, a general store, etc. You’ll wind up backtracking to all of them throughout the course of the game, but unfortunately, most of the reasons for these revisits are pretty illogical. For instance, after one in-game event, a sealed garage door I had searched countless times before magically had an unexplained hammer now resting on the ground around it, which was also now blocked by a shroud of poisonous fog. It’s clear that these wild environment changes were scripted into the game just to get an added use out of the same location, and that a lot of these scenarios weren’t really thought through as well as they could have been.

Thankfully, there are a few bright moments in Hallowed Legends: Ship of Bones that help to melt the ice. One of the more interesting mechanics about the game is the Book of Fire, which you’ll use on several different occasions to thaw the freezing ice that your nemesis leaves behind in her wake. What’s cool about this is that each time you have to use the book, you’ll need to match its many relics with little image snippets in the game world to activate its powers.

The hidden object scenes are also extremely well done, with interesting senses of depth, and tons of different interactive objects you’ll need to assemble before you can check them off of your list: like putting a scoop of ice cream on an empty cone, or putting some cheese on a mousetrap. The puzzles are a welcomed treat, and are pretty nicely varied, albeit far too easy in most situations.

Finally, as an added challenge, you’ll also get to hunt for 22 goblins hidden throughout the game world, and unlock some in-game achievements to boot.

But in the end, Hallowed Legends: Ship of Bones just didn’t have that sense of intrigue that a good hidden object adventure game should. I just couldn’t get past the convoluted story, the limited and familiar world, and the cluttered mechanics that tricked me into backtracking to previous locations. And despite some nice interactive hidden object scenes and the interesting Book of Fire, this is still one hidden object adventure that is probably best left in the back of the freezer for now.