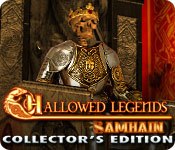 Follow a vanished ex-flame to the Cornwall Celtic Festival and find yourself trapped in the uncanny world of Celtic mythology.

Hallowed Legends: Samhain starts by retreading some familiar ground and putting you in the role of a woman looking for her vanished ex-fiance. It continues that conventional trend for some time, quoting other puzzle-centric hidden object titles by reusing more overly-familiar puzzles than is probably good for it. Thankfully, around mid-way through, the game really hits its stride and from then on becomes a fascinating Celtic-themed adventure.

Things start with the main character reminiscing about her ex-fiance and we learn that their relationship fell apart when Robert, a former reporter, became obsessed with following supernatural leads. His latest lead has taken him to Cornwall, England and after receiving a disturbingly truncated overseas phone call from him, you decide there’s nothing for it but to go to Cornwall and find out what’s happened. You arrive in the village just as the festival-goers are heading up the hill to the old chapel. You hurry to catch up with them but realize all too quickly, that something terrible has occurred and that more people than Robert may be in danger.

Visually, Hallowed Legends: Samhain varies from other hidden object games, at least in small ways, by mixing up the interface. Rather than having the hint button on the right and the inventory centered, it puts the hint button in the center and sets the inventory and journal to the left and right of it. This doesn’t alter gameplay at all, but one helpful addition that does make a difference is the objective, which is always displayed at the top center of the screen. In general, the game moves the story along in much the same way as other hidden object games, alternating puzzles with hidden object sequences but here and there gives things their own unique spin. For one thing, checking the journal isn’t just to refresh your memory regarding things you’ve already seen; if you don’t check it, you’ll actually be missing important and interesting story points. For another, some of the puzzles in the latter half of the game are cool and original and move in a fresh new direction compared to those in other, similar games.

The game’s graphics for the most part, (barring some fuzzy, sloppy looking cutscenes) are on par with the best 3D/photographic games out there and the story is presented in a way that keeps you curious and wanting to play through to the end. The game as a whole will keep you absorbed for some time since it’s longer than your average hidden object adventure, clocking in at roughly 4-5 hours. And once you’re done, you gain access to extras like concept art, wallpapers, a screensaver and several music tracks, as well as a bonus chapter that serves as a prequel to the main game; in it you play as the overly-inquisitive Robert, and witness the events leading up to his disappearance.

While offering much that’s good, Hallowed Legends: Samhain does have a few areas that could use some improvement. To begin with, the puzzles you encounter at first are of the most overused and stale variety, such as an upside down version of the old “move a stack of weights from one spindle to another” puzzle. It’s disheartening starting the game with these and thinking all subsequent puzzles will be of similar originality (although as stated above, puzzles do improve greatly later in the game).

Another issue is the lack of voice acting which would go a long way to improving some fairly dry main character dialog. No matter what bizarre, unearthly thing happens, our heroine moves forward without batting an eyelash which means either she’s an unusually brave and practical gal or she’s highly sedated. Lastly, one small pet peeve about the game’s mechanics – once or twice the game presents you with some serious red herrings, locations that keep twinkling although you’re totally done with them. Unless you check the strategy guide and confirm these areas are clear, you could very well waste a lot of time revisiting those places again and again thinking you must have missed something.

Overall, and despite these few small flaws, Hallowed Legends: Samhain is a rich, well-crafted hidden object adventure. Set in the beautiful English countryside and saturated in ancient Celtic lore, it’s for the most part, a visual and fictional treat. Although starting a bit shakily, it finds its feet a couple of hours in and from then on becomes an engrossing game that’ll hold your attention captive for more than a few afternoons. Add to that some fun unlockables and a reasonably engaging bonus chapter and you have the formula for a first class hidden object adventure.