Home / Reviews / Half the Sky Movement: The Game Review 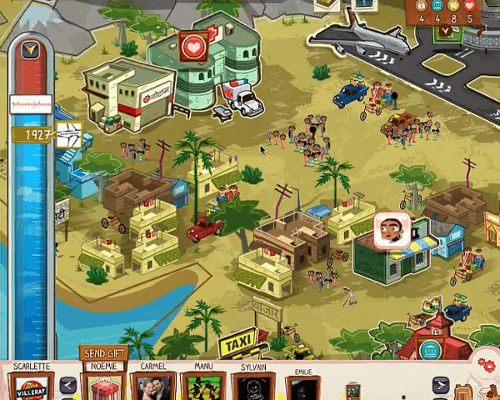 Social gaming for a cause

I was pretty intrigued by the notion of Half the Sky Movement: The Game when I had the chance to preview the ambitious project a few weeks ago. A game that lets you donate to a number of noble causes just by playing, and helping to raise awareness for the empowerment of women seemed like it could do no wrong. So how does this innovative Facebook game manage to hold up to its promising aspirations?

There’s nothing too fancy about the game’s presentation, but the story is very engaging, and it plays more like an interactive storybook than anything else. Some of the characters’ husbands make some obvious pigheaded remarks towards women like “Shouldn’t you be staying home with the kids?,” which are meant to drive home the point of women oppression, but these moments all come across feeling a bit forced instead. You start out in India as a mother of two named Radhika, and the farther you progress in the game, you’ll get to travel to other locations around the world and meet a larger cast of characters in Kenya, Afghanistan, Vietnam, and finally the United States. In each story scenario, you’ll have a choice to make your voice heard or remain silent and find a subtler approach. By completing these story objectives and increasing your total health, education, and economy meters, you can also rank up and earn different titles like advocate, activist, and leader.

In addition to the social aspects of Half the Sky Movement: The Game, performing helpful actions is represented by a fun matching mini-game. The mini-game has you linking series of like-objects together such as mangoes, books, or goat milk in a Bejeweled type of grid setting, and you can replay them as many times as you want to earn more goods to sell at the market. You can also buy a number of power-ups to keep those combos rising, like mega-linking capabilities, score boosters, and a 30-second time bonus. While the smooth and simple mini-game is a whole lot of fun to play, I would have liked to see a bit more variety in the mini-games, other than just interchanging different objects on the grid.

The donation feature is implemented very well, and it really makes you feel good by gaming for a cause. But the best part about it is that you can actually unlock all sorts of rewards simply by playing! Early on in the game, I helped Radhika collect some extra books from people in town to give to her daughter’s school. After completing this quest, I was notified by Half the Sky Movement that I had unlocked a free reward, and that a real live book would be sent by Pearson to a real live girl in India through the Room to Read foundation, all thanks to me. Now how cool is that? 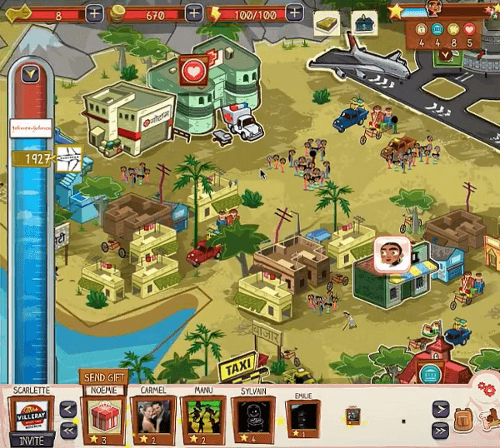 That’s not the only way to donate towards women in Half the Sky Movement: The Game either. The game allows you to send real donations at any time to the sponsor of your choosing, and you’re always encouraged to invite your Facebook friends into the mix to help out as well. Everything you do in the game, from completing quests, to playing mini-games and sending gifts increases your overall charity meter, and hitting certain milestones will unlock additional free gifts on your behalf. For instance, in my game, earning 4,500 total points unlocked a $4.50 donation to the Fistula Foundation for surgeries sponsored by Johnson & Johnson.

Of course, as with any free-to-play game these days, there comes a moment when your energy is running on empty, and you’re forced to step away for a while or cough up the real bucks. This happens a bit quickly in Half the Sky Movement: The Game, when Radhika wants to buy an addition to her house with the money she made from her small startup business. The only catch is that the construction permit for the home add-on costs a whopping 1,000 coins, and I only had 160 coins to my name at this point. However, it’s hard to criticize in-app purchases that are put towards such a good cause. 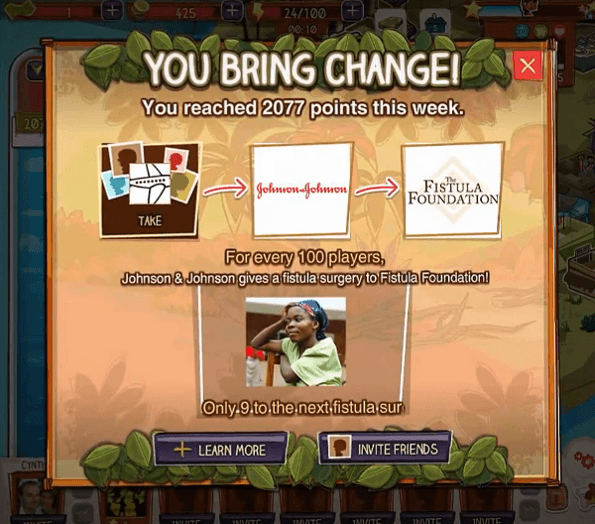 Which brings me to the biggest gripe I had with Half the Sky Movement as a social freemium game. The different values of game dollars (called Hope Funds), coins, and energy don’t seem at all relative to one another, and their worth in the game is often far less than how much you’ll wind up paying to have them restocked. For instance, I had to spend 5 of my previous Hope Funds to buy a stingy energy boost in order to access the construction quest. Considering you only start the game with 5 of these Hope Funds, it makes the transaction seem extremely steep. It also costs 1 to 2 Hope Funds to buy a single power-up in the mini-games, which just doesn’t make a whole lot of sense. It also cost me energy each time I tried to access the quest, whether I wound up completing it at that instance or not.

But in the end, the minor kinks and design flaws in Half the Sky Movement: The Game’s free-to-play model almost doesn’t really matter. It’s a very heartwarming experience, and I encourage everyone reading this to give it a try, even if only for a few minutes here or there. In doing so, we can all help out an important cause by doing what we all know how to do best here at Gamezebo: playing games!