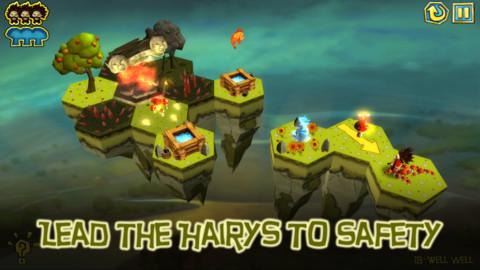 Refreshingly, not a game about shampoo testimonials

I can’t wait for the inevitable day when we’re able to transport ourselves into video games (that is an inevitability, right?). It’s not because of the possibility to fly, or have superhuman strength; certainly not for the chance to shoot fireballs from my bare hands. Instead, I want to start a rehabilitation center for all the poor, naive characters who can’t seem to stop walking themselves off of edges. Until that day comes, however, there’s always Hairy Tales.

At a broad level, Forest Moon Games’ latest publishing effort from developer Arges Systems is another in a long line of Lemmings-style titles. Set in the fantastical world of the “Hairys,” the game follows a well-meaning race of troll creatures on a quest to rid their land of a creeping evil. The only problem (besides their out of control grooming habits)? The Hairys have absolutely no sense; at a moment’s notice, they’ll wander off the boundaries of their grid-like home land and fall screaming into the cloudy abyss.

This is where you come in. Playing benevolent deity, you uproot grassy hexagons, fill in empty spaces, and rotate existing tiles to save the Hairys from certain disaster. Drag pieces into place, tap to rotate, and tap the patiently waiting Hairy to set him in motion. As you move from one level to the next, you’ll encounter everything from arrows that change walking direction to fences that curve your path to enemies that must be deftly avoided — all in service of collecting each level’s runic power crystal to melt away the decay and open a portal to the next zone.

As with any game where your character is in constant motion, the quality of the experience in Hairy Tales is tied directly the creativity of the level design. Luckily, Arges Systems (mostly) delivers in spades, offering up over 70 densely constructed stages that will bend your brain and scratch your puzzler’s itch. There’s a real sense of transition from calm, contemplative play — evaluate each tile, set things up, and watch them work — to more frantic masterminding. Much of the game’s levels challenge you to squeeze all the utility available out of your setup, moving tiles as the Hairy walks to make it to the goal by the skin of your teeth.

Mushrooms – which make an appearance as the requisite “three-star” collectible  – are particularly well placed, and provide a sense of optional challenge without feeling unapproachably difficult to obtain. Unfortunately, I can’t always say the same of the game’s “corrupted” squares. Darky and spike-laden, each one proves an immovable hexagon that blocks your path until “uncorrupted” via adjacent contact with the level’s glowing rune. And while the perfectionist in me felt remiss moving on to the next level seeing the taunting “80%” corruption cleared dancing onscreen at the level’s end, many of these blighted hexagons simply prove too obtusely placed to consider manufacturing a route that would get rid of them.

On that note, manufacturing a route is sometimes the problem itself. As the amount of mid-motion tile movement increases in Hairy Tales, so do instances of misread drags, delayed rotation, and – in some cases – outright refusal to place platforms where you want them. While not a frequent occurrence, the issue pops up often enough to prove frustrating, especially in instances where a frantic set of movements are key to success. Further compounding the issue is the fact that, at its most harried, the game will experience the occasional crash, forcing you to navigate an already slow set of graphic-intensive menus. 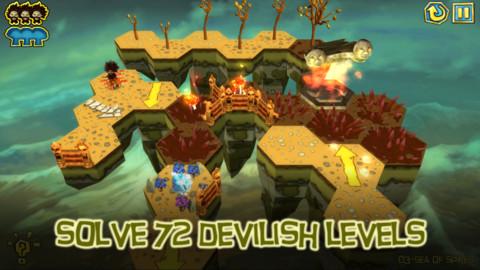 With that said, this is a game whose core competencies prove too compelling for the peccadilloes to derail the experience fully. A vibrant, quirky world ripped seemingly out of an off-brand fairytale, a jaunty folk soundtrack, and a complete lack of sleazy monetization all add to the rock-solid puzzle mechanics. So while this tale may get a little hairy sometimes (I couldn’t resist), it’s more than worth the price of admission.

He-Man: The Most Powerful Game in the Universe Review