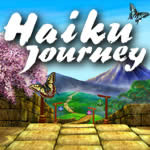 and give all their points to you.

Haiku, a major form of Japanese poetry, is comprised of 17 syllables, in its English-language adaptation, divided across three metrical units of five, seven and five. The perfect vehicle for portraying a singular moment in time, it also serves well as the basis for word-crafting fun.

Haiku Journey offers a unique experience. Relaxing and brain-straining at once, this oriental word-puzzler oozes atmosphere and high production values. From its slick interface to stunning visuals to tranquil music to challenging puzzles, it has it all, even a calming screensaver.

Representing a journey to Mount Fuji, you choose a path to follow via two modes of play, Time or Puzzle. In Puzzle mode, turns are limited. Unused turns provide you with a bonus. In Time mode, the clock’s running. So, making words fast is key. If time expires before you complete a level, you return to the beginning of the current Landmark (stage). In all, you’ll encounter ten Landmarks and a total of 85 levels.

Gameplay, like a haiku, is simple. Words are created by linking letters together horizontally, vertically and diagonally. Click the letters in sequence and select “Submit” or double-click the last letter of the word. Equally, click the first letter of the word you want to make, hold the left mouse button down and drag the pointer over the other letters, releasing the button when done. Each letter tile appears over a lantern which is “lit” when the letter is used. Light all lanterns and you’ll receive an Omamori, a Japanese lucky charm that increases the points awarded — a score multiplier. With each new level, the multiplier increases.

Word creation, however, is only half the challenge. Haikus, presented Wheel of Fortune style, are solved for bonus points. As you construct words, the first letter of each reveals similar letters in the haiku. That is, spell “ancient” and all instances of the letter “a” in the haiku (if any) are revealed. The sooner you solve a haiku the better, too, in that points awarded decrease as new letters are added.

Of course, power-ups add to the fun. Three- and four-letter words offer no benefit other than points earned and letters revealed in your haiku. Create a five- or six-letter word, though, and you’ll receive a power-up that lights multiple lanterns. Generate a seven-letter word or greater and all lanterns will be lit. Other power-ups include wild cards, substituted for any letter, and beaded letters, which light up one lantern for each bead. The latter must be used quickly, though, as the beads slowly disappear.

Power-ups aren’t the only goodies acquired on your journey. When you complete a Landmark, you earn an Engi-mono, a sacred charm to aid in your quest. But, you can only carry three at a time. These include the Book of Knowledge, which reveals bonus words; the Amulet of Inspiration, which uncovers multiple haiku letters; and the Butterfly, which lights ten lanterns. A total of ten Engi-monos are obtainable.

In addition, you have a limited number of Shuffles and Swaps. Swaps let you change the location of two selected letters while Shuffles rearrange the letter tiles. Some penalties need to be avoid, too. For instance, use too many three-letter words and the North Wind appears to blow out your lighted lanterns. Create a word using the affected tile to dispel it.

Points are assigned for each word based on the number of letters used. Three-letter words give a paltry 150 points. Conversely, a ten-letter word garners a massive 4,000. Employing less common letters furnishes greater points, as well. You also increase in rank as you progress in your word-creating abilities. While you begin a mere Novice, it’s not long before you move up to Apprentice and, eventually, reach Haiku Master.

As mentioned earlier, production values in Haiku Journey are exceptional. Beautiful graphics are augmented by animated backgrounds, and soothing oriental music adds its charm. Gameplay is highly addictive, as well. If you prefer a heartier challenge, Timed mode provides it. Meanwhile, those wanting a relaxing experience can elect Puzzle. Either way, it’s a first-class experience. And, while the haiku-factor adds appeal and playability, solving them is optional. My only gripe, and it’s small, is that you get but one guess per haiku. Guess wrong, and it’s “No haiku for you!” A second chance would be nice even if no points are awarded.

A brilliant challenge for the wordsmith and poet within, Haiku Journey is brain-teasingly good. While it may not be your pathway to greater knowledge, it’s certainly just a step away from hours of haiku-inspired enjoyment. Bow to your sensei and haiku!