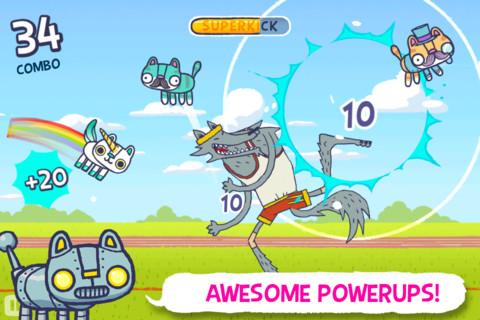 Is it true that cats always land on their feet when they fall?

Do you ever get tired of playing the same old boring game of Hacky Sack? You aren’t alone. Well what if I told you there was an exciting and challenging new way to play Hacky Sack, by kicking something that was a little more, uh, naturally aerodynamic? Still listening? Good, because now I present you with Hackycat by Ken Wong: one of the best mobile time wasters I’ve played in a very long time.

Before I start this review, let’s get one thing straight right of the bat: I’ve always been a dog person. Now don’t get me wrong, it’s not that I have something against cats or anything; I just never understood the appeal of all those cat memes prowling around on the internet (I’m sure you know the ones). So that’s why the idea of a game where you kick a bunch of cats in the air seemed oddly appealing to me. At first, the idea of HackyCat may seem like a sick, cruel joke, but cat lover or not, there’s no denying how much fun any fan of mobile gaming will have with this one.

Like traditional Hacky Sack, the gameplay of Hackycat is simple: don’t let your cats hit the ground! Each round starts out easy enough, but once you work your way up to four or five cats all careening through the air at once, things get insanely hectic, and you’ll be furiously tapping all over your screen like there’s no tomorrow: because it only takes one cat to hit the ground, and then it’s game over buster! To make matters worse, you’ll also have to be on the lookout for explosive pink birds, which can dismember your HackyCats faster than you can meow. Hackycat is darn difficult, but never frustratingly so, and the lighting speed of each game makes it incredibly easy to hit that ‘Play Again’ button another 10, or 20, or in my case, 100 times in a single game session.

There are several options for combos in the game, which depend on how quickly you can tap on your cats, or if you’re able to tap on two or more of them at the same exact time. There will also be a few opportunities to perform a special high-kick, by punting your cat when he tumbles through a specified circular area on the game screen. Executing a high-kick in effect removes a cat from your current game (most likely launching him into the next state), and gives you a little more breathing room as the paws begin to fly.

Hackycat has a surprising amount of depth to it for a simple iOS time waster, with 38 unique in-game achievements to unlock, tons of new cats to adopt from the store, and permanent power-ups that become available as you gain more experience points. The power-ups are invaluable too, like temporary protective rainbows that line the ground and bounce a fallen feline back into play, or inflatable clouds that pump up your cats and make them lighter than air. The cat names also reach an extreme level on the adorable meter, and will make any cat lover go “Awwww!” with such feline friends as Muffles, Sprinkles, and Sir Pussington. I’ve grown a bit partial to the elusive Mustachio myself, who gives me a bonus 5 points for every time I give him a kick, and looks pretty dapper in that facial hair as well.

The cartoony graphics are a perfect fit for the game’s tongue-in-cheek sense of humor, as you’ll get your Hackycat on in such colorful locations as the school track and the beach. What’s even funnier is that the two initial athletes you can choose from, Corrine and Toby, just seem like such nice and friendly people, and not ones you might mistake for devious cat kickers! Each athlete comes with a special perk, like a faster super charge, or bigger super target, which adds another layer of strategy in building up your abilities. You also get to angle the direction in which your cats will be kicked by sliding your finger on the screen, in order to pick up collectable game currency that resembles a meme cat’s favorite treat. And what could that be, you might ask? Why, cheeseburgers of course! 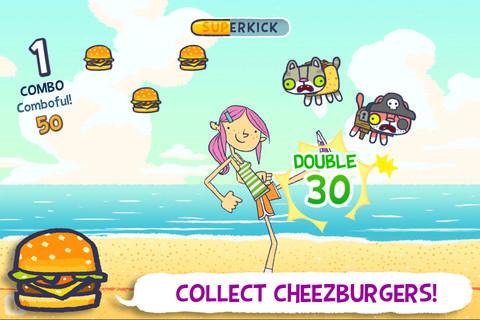 In the end, your Hackycat experience is entirely what you make it: whether you only have 10 minutes to kill, or several hours to spend building up your attributes and adopting every cat. It is truly one of the most fun and addictive time wasters on the mobile market to date. And for those who might still be a little hesitant about scuffing up some kittens, not to worry, because Hackycat explicitly states that all animated cats shown in the game are trained professionals. Phew. Now I feel a lot better about sending Mustachio sailing over the moon.