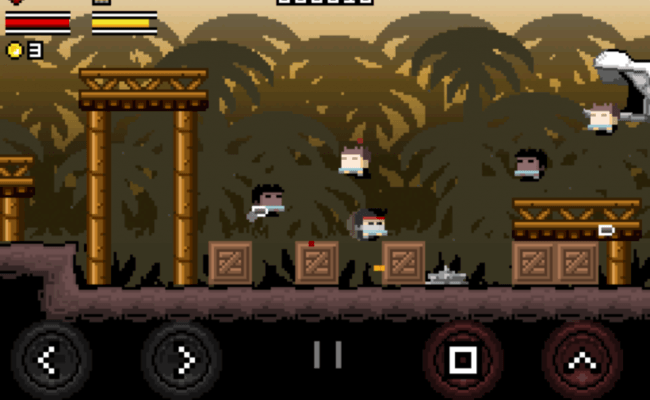 There are two inevitabilities in Gunslugs: Death and fun.

When it comes to making new “retro” games, few mobile developers do it better than OrangePixel. This time, the studio has released Gunslugs, a side-scrolling shooter in the same vein as Metal Slug and Gunstar Heroes. Like its old-school brethren, Gunslugs provides action, difficulty, and a large supply of frustration. These pieces work together to create a deep and addictive mobile experience.

Gunslugs plays just like other side-scrolling shooters. You get a choice of characters and you’ll run, jump, and shoot your way through numerous worlds consisting of two levels (and one boss) a piece. Along the way, you’ll pick up new weapons, equipment, and vehicles, all of which have their own properties and usefulness. There’s also an array of enemy types, explosives, and hazards that help any seasoned gamer feel right at home. Just don’t get too comfortable, as you’re going to be in for a bumpy ride.

I need to be honest and admit that I’ve yet to beat Gunslugs, and I don’t expect that to change any time soon. However, my lack of success is not for a lack of trying, as I’ve put in far more time than I’d care to admit. While it’s not unforgiving, Gunslugs is hard, and the randomly-generated levels don’t do anything to ease the pain of defeat. The game offers a bit of help along the way, such as a generous health system, and unlockable characters that act as checkpoints. Yet in the end, Gunslugs is reminiscent of Spelunky, where one death brings you straight back to the main menu.

There are plenty of reasons why this game is difficult. Enemy soldiers don’t do a ton of damage, but when they’re accompanied by grenade launchers, jetpack soldiers, and tanks, the damage adds up. Even though enemies have the ability to rack up quick damage, the most frustrating moments are when you suddenly lose your life to explosives. There are tons of explosives in Gunslugs, and amidst the chaos of war, you’ll find that land mines and exploding barrels are the biggest threat of all. The vast majority of my deaths come from not seeing a land mine or accidentally shooting a barrel at point blank range. 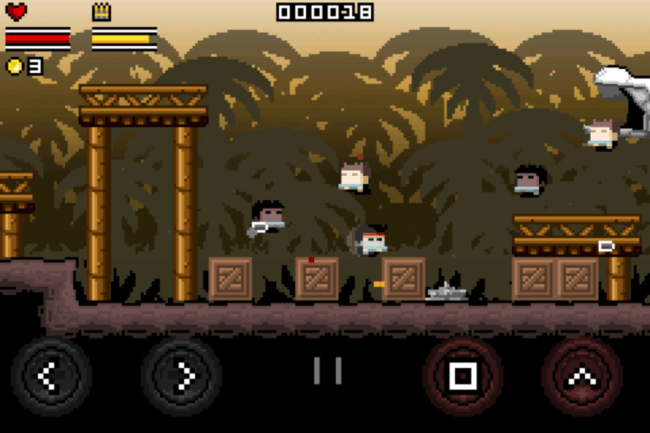 Fortunately, failure never feels unfair. When I die to an explosion, it’s always because I went rushing in carelessly. When a boss kills me, it’s because I approached it without studying its pattern. Death is an inevitably in Gunslugs, but it doesn’t detract from the experience. If you happen to struggle with death, the game provides numerous ways to help. As you kill enemies and destroy buildings, you collect coins which have two uses. The first is playing the challenging bonus stages. The second is purchasing equipment. When you enter a building, you’ll sometimes get the option to buy an item such as an extra life or body armor. These items are a godsend, and they’re just about necessary to run through the entirety of the game.

Of course, once in a while, entering a building will introduce you to a new character.  Unlockable characters work like checkpoints, as different ones start at different stages. The two default characters start at the Plane Yard, the Jungle character will be unlocked in the Jungle, and so on. While characters are the only sense of checkpoints in the game, their appearances are randomly-generated inside buildings, so just reaching a new stage doesn’t mean you’ll be able to start there. 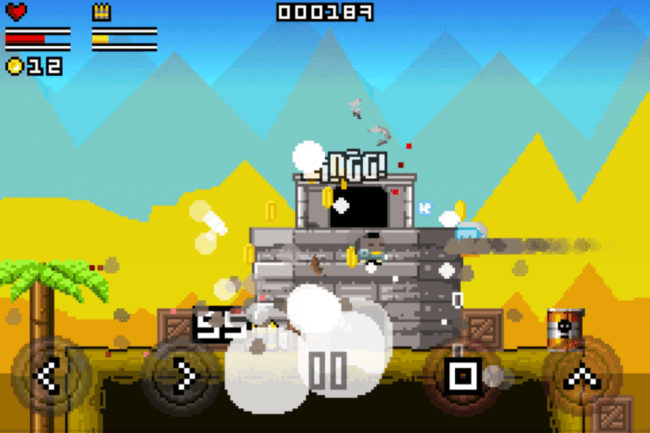 Gunslugs is the complete package. From the great soundtrack, to the perfectly-executed controls, to the hard—but fair and rewarding—gameplay, it’s hard to find any deal breakers. I could say that the bosses feel cheap, or that the chaos leads to unexpected deaths, and those are legitimate concerns, but they do little to take away from the experience. The difficulty may be too much for some, but it may not enough for others. There’s so much praise I want to ramble on about, but I’ll leave it at this: Gunslugs is a game you must get your hands on. I haven’t beat it yet, but I assure you I’ll keep at it until I do.

A brief note: OrangePixel included multiplayer support for Gunslugs. I was unable to test out this portion of the game as it requires both players to use bluetooth controllers.