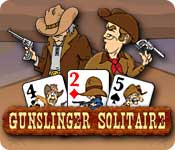 Step through the saloon doors into the Wild West, where you’ll try to find the gold mine at the end of the treasure map with your six-shooter in one hand and a deck of cards in the other. Gunslinger Solitaire puts a unique cowboy spin on the old solitaire card game that’s fun for a while but ultimately has its fair share of tumbleweeds.

The game is divided into 10 stages with a maximum of 10 rounds per stage. I say "maximum" because you don’t necessarily have to play all 10 rounds in order to complete a stage. Instead, each stage has a goal that you must complete to win, such as earning $6,000 or more, obtain a Perfect (clear all cards off the board in a round), or achieve a streak of 8 cards or more, which involves making matches without having to draw a new card from the pile.

Once you get the hang of the game, which requires you to click on cards that are one number higher or lower than the card on the pile, regardless of suit, to clear them from the board, it’s possible to achieve the stage’s goal in the second or third round of play in some cases. Sure, you’re free to continue playing out the rest of the rounds, but there’s no longer any motivation to do so. You can also skip ahead to the next stage automatically, which has the effect of drastically shortening the game’s play length.

As if that didn’t make the game too easy, you’ll also find that cards are randomly turned face up in the columns instead of the usual face down, and later on you can buy a power-up from the General Store that turns even more of them face up at the beginning of each stage.

The General Store also sells, among other things, special bullet cards that you can lay down at any time if you’re stuck to substitute for a face card of a certain value to allow you to continue your streak. With a supply of bullet cards in your arsenal, each round becomes a cinch.

Add to that the fact that you’ll find yourself earning ridiculous amounts of money – much more than you’ll ever need – and the verdict is in: Gunslinger Solitaire is simply not challenging enough.

Each deck is peppered with special cards that unleash a short mini-game. There are a few variations, but each one involves shooting something, whether it’s falling bags of money, wooden ducks or tin cans. The mini-games are nothing special, and a few of them are downright annoying. In Find the Bandit, for example, you have three tries to turn up the Bandit card from six possibilities. The outcome is left totally to chance, and if you fail you’ll be treated to an unpleasant chorus of "boos."

The Tin Can Range game deserves special mention because it’s virtually impossible to play. The goal is to keep tin cans in the air by shooting them with a rifle, but not only do the cans fall way too quickly, but they will sometimes move right out of the window so that there’s no way of clicking on them at all.

On the upside, I did enjoy the Trigger Happy Bonus, a score multiplyer that you can run up by taking as many consecutive turns as you can without having to draw a new card from the deck – it’s fun to try to beat your highest run the next time around. The game also keeps track of gameplay stats for people who like to obsess over numbers.

If it’s just a simple solitaire fix that you’re after, Gunslinger Solitaire will do the trick. But with so-so production values, a virtually non-existent story, and some substantial gameplay flaws, it doesn’t hold a candle to more polished examples of the genre, like Big Fish Games’ golf-themed Fairway Solitaire.