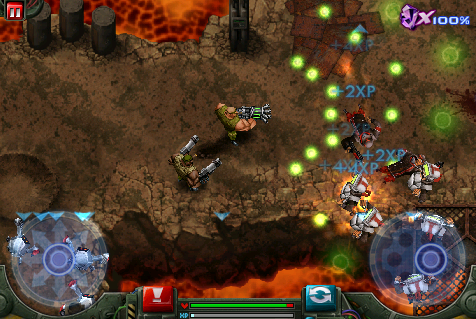 In sitting down to write this review, I got to thinking about twin-stick shooters and how long they’ve been around. Really, they’ve been here since practically the beginning. First getting popular with Robotron 2084 in the arcades. Through the years they’ve followed us, really coming into their own when games got dual analog sticks to work with. They’ve also found a natural home on the iPhone, and Gun Bros is one of the finest examples.

Gun Bros is part of Glu Mobile’s push for their new freemium model, and this one is a perfect example of how enticing that model can be when executed well. You end up with a decent amount of game to play free, and only really need to dig into your real world pockets when you don’t feel like grinding it out to earn money in-game. It’s the perfect mix for those of us that don’t mind the grind, and those that just want to get to the good stuff.

The danger in any freemium game is to make people feel like they NEED to pay money in order to get at the proper game, and in Gun Bros that is definitely not the case. The free download let’s you get down and dirty in some awesome twin-stick shooting action, without feeling like a glorified demo.

The game plays out very much the twin-stick shooters we’ve been playing for years, with the sticks obviously replaced with touch screen controls, one thumb for movement and one for shooting direction. Those spots are down on the screen and while there is action going on under your thumbs it’s kept to a minimum and never really gets in the way, which is a huge plus. You never really have to deal with anything negative in your quest to kill baddies. Overall, the game looks utterly fantastic and really shows off the power of the iPhone 4’s retina display. Lava flows, enemies take damage, and barrels explode. It all looks and plays great.

The controls are spot on and uber specific, letting you really aim your guns while weaving between enemies. Even your AI teammate does a good job of aiming and firing, though with any AI assisted game you’ll be doing most of the heavy lifting. It gives you that old school Smash TV vibe. As an added bonus, you can swap out the generic AI teammate for one of your friend’s characters. While they’ll still be computer controlled, this helps players earn all kinds of cool bonuses. 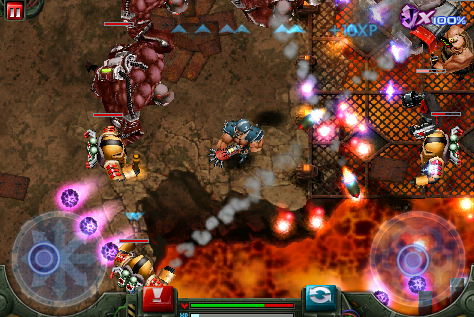 In between waves of enemies you can upgrade weapons and armor, with either money gained in-game or in real world dollars – your choice. So far I’ve enjoyed the grind for cash so I’m content to stick with that mode for a bit, but some items are priced high enough that you gotta assume they expect those to be acquired with real cash.

The entire game has this cool fun vibe that is really exemplified in the game’s plot line. Yor play as part of the Freakishly Rugged Advanced Genetics Galactic Enforcement Division (also known as F.R.A.G.G.E.D.) whose mission is to defend the universe from the Tyrannical Oppressors of Life (or T.O.O.L.). Silliness like this sums up the kind of game you’re getting here, which is cartoonishly exaggerated. The only place this felt a little inappropriate was in the menus, where the sometimes scantily clad cartoon women felt just a little too over the top.

Gun Bros is one of the best action games the iPhone has to offer. Spot on controls, tried and true gameplay, and a fun vibe all come together in a package that would easily be worth a purchase – and yet it’s free! This one is a no-brainer for action fans. Download and enjoy.