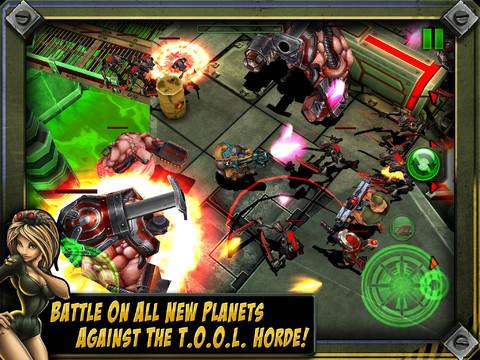 The Bros are back and bro-ier than ever!

It’s been a while since we last saw the Gun Bros., but seasoned fans of the series will feel right at home here in this much-anticipated sequel. In Gun Bros. 2, Francis and Percy Gun return for another installment of all-out destruction with big guns and even bigger bad guys. But has the time away left these war-hardened F.R.A.G.G.E.D. vets a little soft on the inside? Come on. Is that even a question here?

Missions are split up by 8 chapters of difficulty and set across 3 different bro-tastic environments, including a refinery covered in green radioactive waste, a flaming fortress inferno, and a strange purple apocalypse setting. Each mission involves fending off wave after wave of clever and refreshing enemy designs, like these little grenade guys that charge at you, ready to explode. The dual joystick controls work just as well as ever, as you move around with your left thumb and fire on all fronts with your right. You’ll also be able to launch onto neighboring platforms by means of hyper jump pads, which add an interesting dynamic to the 360-rotational shooting gameplay. The Bros. still move a little too slow for my liking, but I’m sure you’d move slow too if you were hauling 500 pounds of solid muscle around, and flaunting weapons that were bigger than your arm. The graphics are top-notch as usual, and there’s a really funny celebratory animation that happens every time you finish a mission.

One of the best things about the original Gun Bros. game was that Glu Mobile’s free-to-play model offered respect and flexibility to gamers, and never felt like you were playing a demo or being forced to pay in order to continue on in the game. Well I’m happy to report that Gun Bros. 2 plays by the motto of “if something’s not broken, you better not fix it.” Sure, increasingly difficult enemies are going to pressure you into buying the higher-end weapons, but if you’re good enough at the game, this progression feels natural. What’s even better is that you can sell back some of your old and unused guns and armor at the store for additional Xplodium resources to spend on new weapons.

Everything in the game is just paced so nicely, and you’ll level up at all the right moments, and unlock new tiers of powerful weapons just when you need them. If you happen to fall during battle, you can also part with a few precious War Bucks to jump right back in the action without having to start the mission over. In addition to the main single player campaign, you can also try your muscular hand in Endless Mode, which is a great way to stock up on Xplodium. This is an extremely smart inclusion on behalf of the developers, as it’s a fun alternative to grinding through past levels to save up for better guns.

As you progress further into the game, enemies start to get a little bit smarter, and bring indestructible shields into the fray. These shields can be of the blue, red, or orange variety, and you’ll need to buy a special shield-blasting modification for your weapons in order to destroy them. But every time you want to switch to a different color, you’ll need to cough up an additional 2 War Bucks, so you’ll have to be strategic about it if you want some leftover funds for new weapons. And let me tell you, I don’t think there’s anything more rewarding in Gun Bros. 2 than shattering an enemy’s shield (and by default, the enemy itself) with one quick shotgun blast. In addition to buying a whole armory full of intimidating weapons like The Sucker Punch, The Mauler, and my personal favorite, Li’l Sparky, you can also purchase upgrades for the weapons you already own to boost their damage rating. There’s also a nice collection aspect to Gun Bros. 2, where finishing a mission in gold star time will unlock some rare loot and armor that you wouldn’t find anywhere else. Collect and equip every piece of a single armor set, and you’ll get a nice health increase perk.

As big as Francis and Percy Gun are, you’ll still face some bosses that simply dwarf them in comparison. But that’s where the Honey Badger comes in: an indestructible war tank that packs a serious punch whenever ground support deploys them in the field to help you out. Controlling the Honey Badger is way too much fun, as you’ll get to fire special rocket blasts, and ram right through the enemies with an awesomely violent charge feature. But the experience is definitely better with a friend. One thing I thought was a bit strange is that if you choose to go it solo, your A.I.-controlled partner doesn’t seem to level-up along with you. By the time my Bro had reached Level 5, my A.I. partner was still at Level 1, which caused him to die almost instantly on some of the later missions. 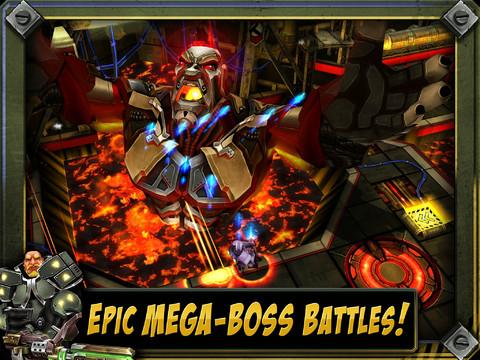 While Glu Mobile doesn’t stray too far from what made the first Gun Bros. so great, there’s still a part of me that would have liked to see the game take a few more risks, and really introduce some things we’ve never seen before. But that’s still a really minor complaint, as this is still a Gun Bros. game we’re talking about here, and as such, it’s a complete blast to play through. So go round up your bros, polish off your Li’l Sparky, and get ready for one heck of a time, as Gun Bros. 2 is here to fight in full force.