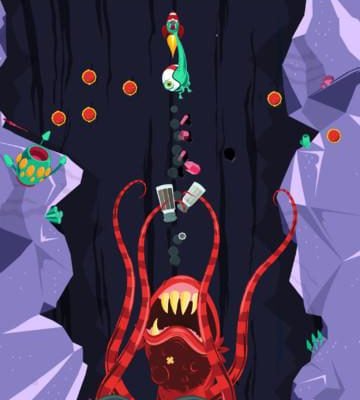 Chew your way to the stars—if you can.

Time and time again, decent mobile and tablet games are made near-unplayable by shoddy controls. Many of said games rely on virtual d-pads, virtual joysticks, and on-screen buttons that offer no tactile feedback, thereby making simple movements and attacks more difficult to execute than what’s typical with a real controller. The last thing iOS gaming needs is another wacky control scheme like the “chewing controls” introduced in Gumulon. Surprise of the century: Gumulon‘s chewing gimmick barely works. You can play with traditional tap controls, but all you get is an average endless climbing game that loses its flavor within minutes.

In Gumulon, you don the crash helmet of Ace, an alien miner who’s super-enthused about his job. He’s so keen on it, in fact, that he digs a little too deeply and awakens a ravenous horror: something that looks like a cross between a slug and one of Lovecraft’s Great Old Ones. Whatever it is, it’s hungry, and it’s got a hankering for some green alien flesh. Ace needs to climb, climb, and climb some more in order to avoid becoming breakfast. 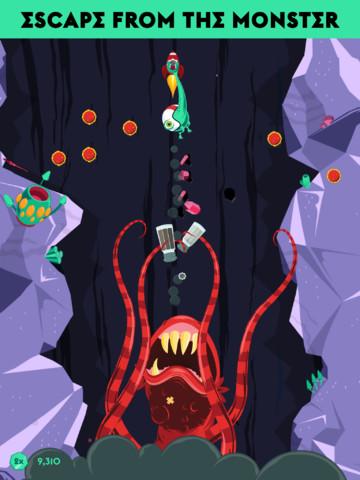 Gumulon is essentially a long stretch with occasional terrain shifts. There are nodes dotted through the mineshaft, and Ace needs to catch them in his mouth, swing himself around and around, and then use the momentum to launch himself towards the next node. If he misses a jump, he loses precious ground to the hungry thing chasing him. It takes some time to get the hang of Gumulon‘s physics, but you should be able to fling some alien bod with ease once you settle into the pattern.

Gumulon also challenges you to collect gems and latch onto special nodes that let you alert your fellow miners about the horrible thing barreling up at them (“No biggie, just a heads-up”). These rescues earn you a lot of extra points, though they take a few seconds to complete. You can bypass the rescues easily enough, but that means no extra points plus a dead friend. 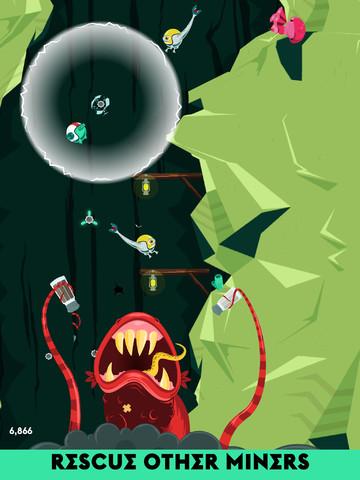 Gumulon is essentially an interactive advertisement for Stride gum, which is why you’re offered “chewing” controls at the start of the game. The game matches your face up with an outline (you need a front-facing camera for this to work), and Ace is theoretically supposed to jump from node to node every time you champ your jaws. Going by my experience on an iPhone 5, the mechanic rarely worked. Moreover, moving the camera off center by even the slightest bit brings the game to a screeching halt until you fit your face in the outline again.

If you’re going to play Gumulon, it’s best to do so with the traditional tap controls. Don’t expect a special experience, though: this is a pretty average endless climber. Even good old ancient Doodle Jump offers far more variety in terms of tricks, traps, and power-ups. Gumulon is still fun for an hour or two, though, and it might even leave you with a craving for gum. If you reach for some Juicy Fruit, however, it’s safe to say that Stride’s little iOS ad experiment has failed.