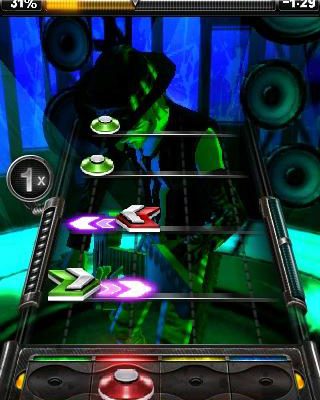 Music games and the iPhone go together like peanut butter and jelly. After all, what is an iPhone but an iPod with a phone built into it? And what’s an iPod but a music player? Despite the popularity of a large number of music games, Activision wasn’t quick to deliver their Guitar Hero franchise to the App Store. As it turns out, Guitar Hero on the iPhone was well worth the wait.

For the first time in as long as we can remember, a developer has decided to bring a new bag of tricks to the music genre. Games like Tap Tap Revenge and Rock Band may established the basic formula for making these games work on the iPhone, but Guitar Hero is actually bringing something truly new to mobile music games – strumming and slide lines.

For those of you unfamiliar with the basics, you’ll need to understand them to fully appreciate what these two additions add to the mix. In music games like this one, players will see a series of gems (or notes, or bars, or whatever a game decides to call them) that travel towards the bottom of the screen. When the gems reach the designated area – Guitar Hero calls this the “note highway” – the player will tap on the gem to increase their score. The tapping is done in rhythm with the music, and players will need to tap up a frenzy to try not to miss any notes. Miss too many and you’ll fail the song. 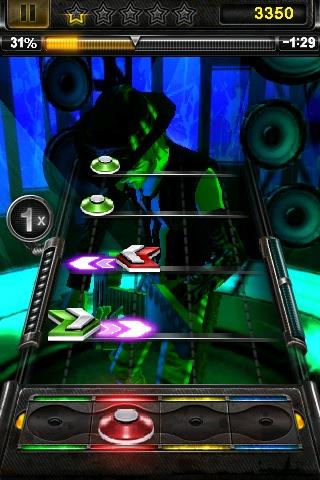 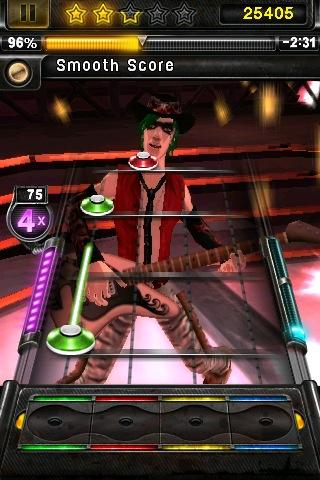 It’s a simple formula and it’s been copied time and time again for nearly a decade (most would argue it was introduced in 2002’s PlayStation 2 sleeper hit Frequency.) Sure there have been twists and tweaks over the years, but mobile music games have tried to stick as close to that original formula as they could – after all, when dealing with such a small screen the most important thing is to tackle the essentials.

Guitar Hero nails those essentials while taking a chance on a few new mechanics, and the results are exceptional. The biggest new gameplay feature to be introduced is strumming. In addition to the regular note gems, players will encounter strum gems during the regular course of play. These gems look like arrows, but rather than tapping them players will slide their finger in the direction of the arrow to strum. These often come in clusters, so in between moments of traditional note tapping players mat find themselves quickly strumming left, right, and left – brilliantly mimicking the up-and-down nature of real guitar strumming.

Strumming as it’s employed here is totally unique in the world of music games, and it feels great. It can take a little while to get used to switching between tapping and strumming, but having to go from one to the other provides a frantically fun level of challenge.

The other gameplay addition, slide lines, is less of a revolution (but we loved it just the same). If a group of notes is coming down the pipeline incredibly close together they’ll be joined by a neon purple line. This lets players know that they can slide their finger from note to note rather than trying to tap frantically. It’s the mobile equivalent of hammer-ons and pull-offs, and it’s both natural and rewarding. It helps things feel more crazy than they really are, which helps to ramp up the reward center of the brain when you pull it off successfully. 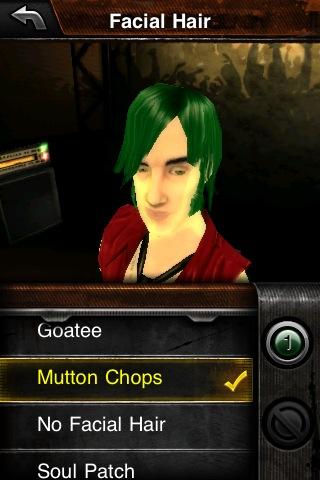 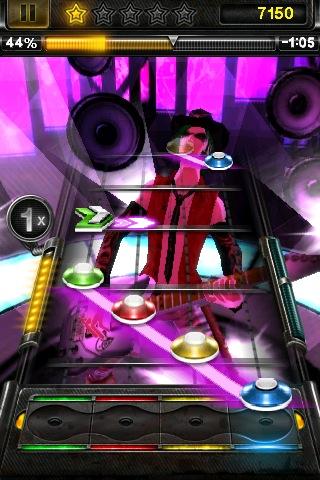 In addition to some tremendous gameplay additions, Guitar Hero manages to offer an incredibly robust package in terms of customizations and goals. Players can create their own rocker and work towards completing any number of challenges. These challenges will up your rock level and earn you points that can be spent on/will unlock new character customization options.

While the non-game elements might be robust, there’s one area of Guitar Hero that’s not, and it’s the games one major Achilles heel – a tiny music selection. Guitar Hero ships with only 6 songs. And while they’re pretty much all outstanding tracks by legendary artists (Paint It Black by The Rolling Stones, Seven Nation Army by The White Stripes) we’re still only talking about 20-30 minutes worth of content. Any fewer tracks and this we’d be forced to call this an EP.

Six tracks can be a bigger offering than it sounds depending on your perspective. With 4 difficulty levels and two different instruments for each song (you can play guitar or bass) there are technically 42 different note tracks here – but that’s little comfort for those who don’t want to hear the same songs over and over again.

Thankfully there’s an in-app music store that will let you build up your collection. At launch it’s pretty barren, but considering the app asks permission to check out your music collection to notify you when your favourite artists become available, it seems like there may be potential here. Considering the hundreds of classic songs licensed for other versions of Guitar Hero, we’d like to think it’s only a matter of time. 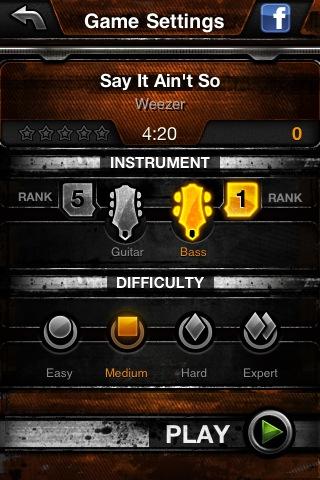 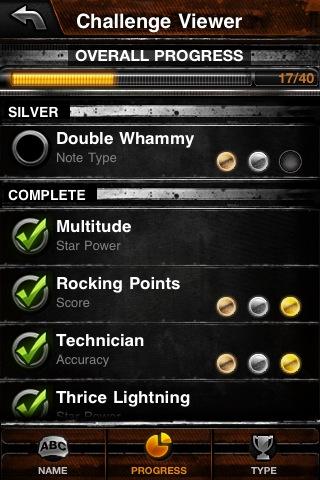 In terms of comfort, Guitar Hero has opted for the same four button control scheme favoured by Rock Band‘s mobile offering and encounters some of the same initial awkwardness. Offering four buttons instead of the three found in Tap Tap Revenge means things tend to get a little crowded, and there’s definitely a period of adjustment as you try to figure out how best to maneuever your thumbs. It only takes a few songs to get in the rhythm of things, but there’s no denying that four buttons is a tight squeeze for the iPhone.

Star power is also surprisingly awkward. Unlike the console versions that have you tilt your guitar to activate the score doubling bonus, players will need to tap a bar that appears within reach of their thumbs. This means players will need to hope for a break in the song if they want to activate without losing their multiplier. Why they would have opted for this rather than simply tilting your iPhone (a method that works perfectly fine in Rock Band for the iPhone) is simply beyond me.

Despite a few stumbles and shortcomings, there’s one fact that I simply can’t avoid: this is the most fun I’ve had with a music game since the original Guitar Hero hit back in 2005. If it wasn’t for the incredibly limited catalogue, Guitar Hero would easily take the mobile rock crown from Tap Tap Revenge 3. In terms of gameplay, it beats the pants off of anything else out there. Now if only we could do something about growing that song list…