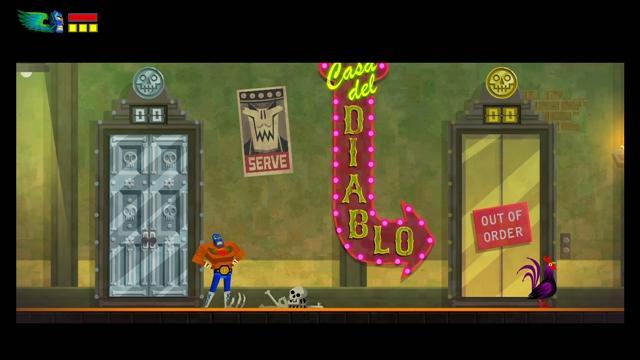 Your next favorite Metroidvania game

In terms of getting me excited about a game, the phrase “A Metroidvania style action-platformer set in a magical Mexican inspired world” is always going to do the job. I do love my Metroid-style games, and enjoy exploring the twists that modern titles put on the original formula. Guacamelee is the most Metroid-like game I’ve played in quite some time – sure, it has its own little neat ideas packed in, but for the most part, it’s heavily inspired by the Nintendo classic. That’s far from a bad thing, mind you, as there’s so much style and finesse lavished across this adventure.

You play as a Luchador who is on a quest to save his childhood sweetheart. After being killed, you’re thrown into the dead world, and discover that you have the ability to jump between two dimensions. Using this technique, the protagonist builds up his powers, takes on each boss character one at a time, and eventually wins back the heart of his love. If you’ve played a Metroid game before, you’ll know what to expect here. The overmap sprawls in multiple different directions, but you won’t be able to visit anywhere you like from the get-go. Instead, you collect powers and slowly but surely open up paths to victory.

But Guacamelee takes its inspiration to the next level. This is very much a Metroid-inspired game, from the overmap to the different colored obstacles that signify which powers you need to use to move past them. Even the upgrades you find are being held by statues that look suspiciously like those from the classic Metroid games. And this is Guacamelee‘s first huge selling point – it doesn’t just contain nods to Metroid, but also to a wide range of classic video games. There are posters scattered on the walls that mimic other games (but with a Mexican twist), and even entire gameplay sections that are a carbon copy of other games. There are plenty of Super Mario nods, for example, and each one will get a massive laugh.

Guacamelee is a rather hilarious game at times. The dialogue is snappy, and the various fanfares and notifications – such as when you pick up a new ability – are wonderfully over-the-top. Of course, the game looks stunning as well, with visuals that are slick and shiny. Add to this the perfect soundtrack for a Mexican-based experience, and you’ll instantly fall in love with Guacamelee‘s style.

Where Guacamelee peels away from its Metroid inspiration is with the fighting. You take enemies on melee-style, as you might expect, and it’s all focused around pulling off special button combos to flick your opponents into the air, then hitting a button to chuck them into other baddies. In this way, you can build your hit combo up into the hundreds, and gain tons of cash by doing so. It’s a really great system that doesn’t feel fiddly at all – you can always pull off the exact moves that you’re aiming for, and all the while do it with an air of greatness. 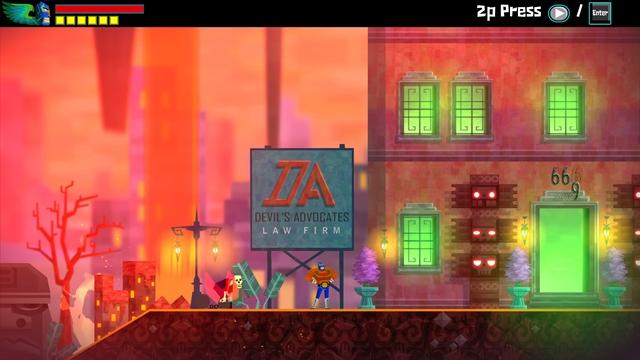 There are plenty of elements that mix the action up too, so that you’re not simply bombing along and knocking enemies down. Every now and again you’ll be caught in an arena, with baddies pouring in to take you out. These are the times when you can really build your combo up and earn gold, which can then be used at shops to increase your abilities. There’s also side-quests to discover, and lots of collectibles and secrets to find.

The aforementioned dimension-hopping is particularly interesting. By switching from one world to the other, the level layout around you will alter ever so slightly, and you’ll be able to keep switching back and forth to reach areas that you couldn’t before. A faint glow shows you where blocks are going to appear between dimensions, and planning your route across single-screen puzzles is always great fun.

My main gripe with Guacamelee is the difficulty spikes. It’s not a very tricky game, and I found myself breezing through most of it without any issue – even if you do die, you’re immediately dropped back at the start of whichever screen you’re currently on. However, every now and again you’ll come up against a boss battle, and some of these are really very difficult indeed. This sudden switch from easy to hard is extremely noticeable, and breaks the flow of the game. 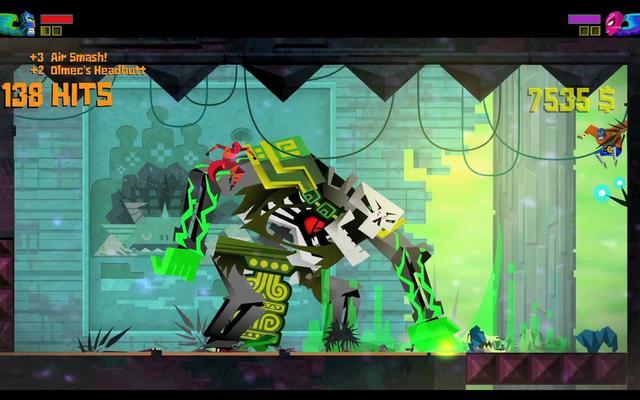 But otherwise, Guacamelee is a fantastic adventure, and one that is equally enjoyable if you can find a friend to play through it co-operatively with you. Either way, there’s just so much to love here, and DrinkBox Studios is definitely a team that I’ll be watching in the future.