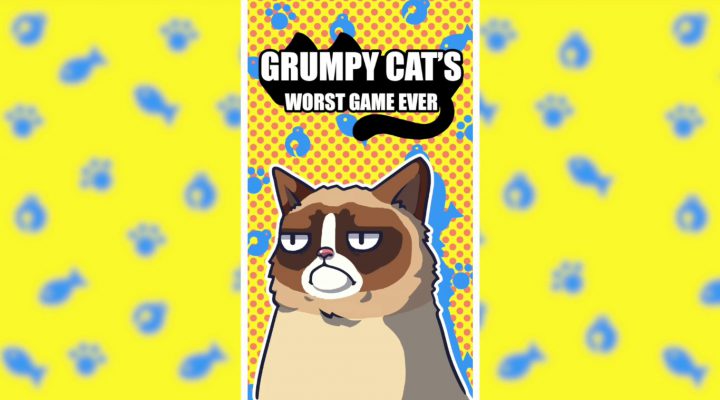 A wide variety of mini-games from the start with plenty more available to unlock as you play.

Grumpy Cat is adorable and hilarious in all her activities and her attitude towards them.

Fair free-to-play mechanics let you play as much as you like with only the occasional (removable) ads in between games.

Would like rewards/score to be adjusted according to game performance as opposed to a strict win vs. lose outcome.

2016 has been a popular year for the WarioWare-esque mini-game collection. The musically-themed Peter Panic, colorful Iron Finger, job-inspired Crap! I’m Broke, and even endless runner variation Rooms of Doom all utilized the micro-burst gameplay of assorted challenges to offer comparably diverse experiences that ranged in quality from title to title. Grumpy Cat’s Worst Game Ever is likely the last addition to the genre this year, but is one of the better examples of the micro-game collection on mobile. It combines the crotchety attitude of its feline internet star with an abundant batch of challenges spanning multiple themes, resulting in a successful compilation that remains fresh and lovable long after Grumpy Cat herself has become bored. 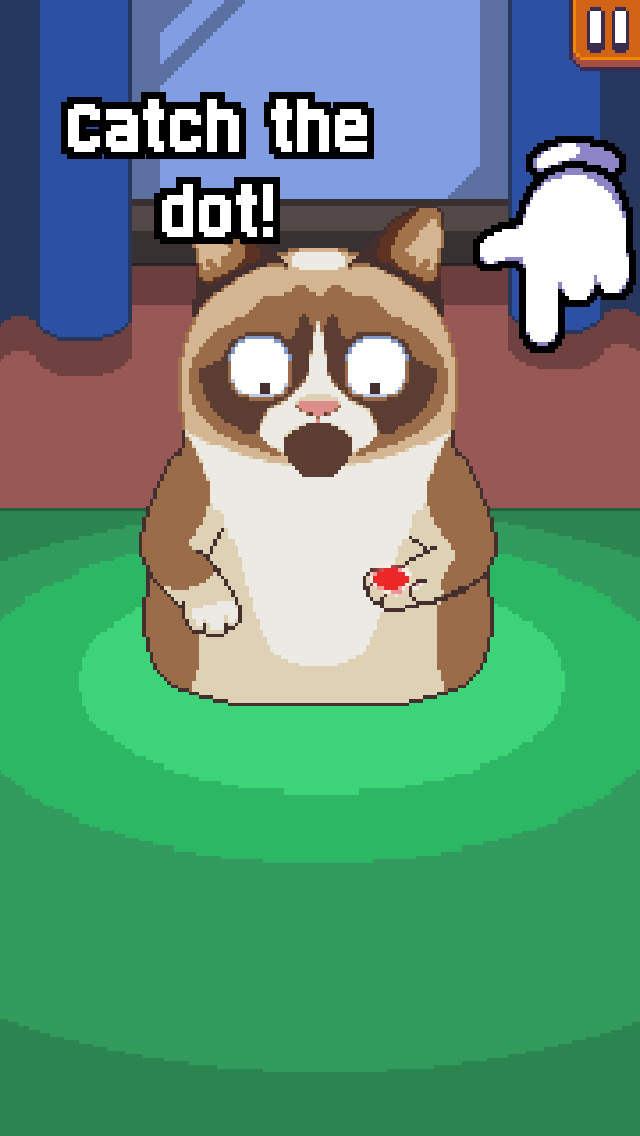 On the slight off-chance that anyone with internet is unfamiliar with who Grumpy Cat is, she’s a real cat (named Tardar Sauce) who became internet famous overnight in 2012 after some photos of her were posted on Reddit. Her perpetually displeased look has resulted in countless internet memes, plushies, a partnership with Friskies, and even a starring role in her own Christmas movie. She is arguably one of the most well-known cats in the world, all thanks to the way her adorably annoyed face is shaped.

That face, and the rest of her, are now the stars of Grumpy Cat’s Worst Game Ever. GCWGE is a wonderful use of and homage to the Grumpy Cat image: she is recreated in charmingly detailed pixel form and placed in a wide variety of different costumes and situations. Tardar performs normal cat activities like chowing down on bowls of kibble and tackling laser lights as well as wackier challenges like dressing up as a magician and rotating cups with her mind or donning a jersey and running a curling team. In every event she maintains her infamous personality: she is just as grumpy knocking glasses off tables as she is having a day at the beach. 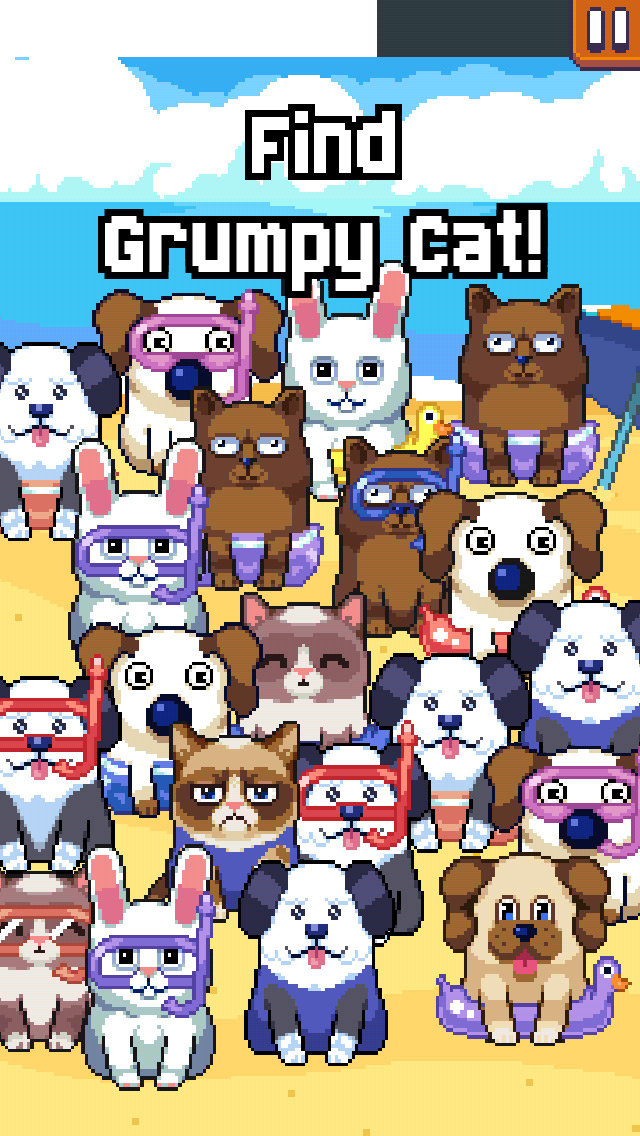 Although she is the star of most of the games—jumping into boxes, hiking over hurdles, or singing in a Grumpy quintet—even games that don’t feature her as the active party still show her less-than-thrilled response once completed. Swiping through a guitar solo will treat you to rocker Grumpy jamming out; connecting a set of wires will light up the Grumpywood sign to her delight (or whatever almost-happy emotion she has).

Your reward for earning coins and using them to unlock additional games is a new Grumpy Cat sticker which decorates both your in-game world and can be used in iOS 10 iMessage. Even the game over screen is adorned by a pitch-perfect Grumpy Cat meme picture with phrases like “Frustrating, huh? / Good.” and “Love this game / Go hug a cactus.” 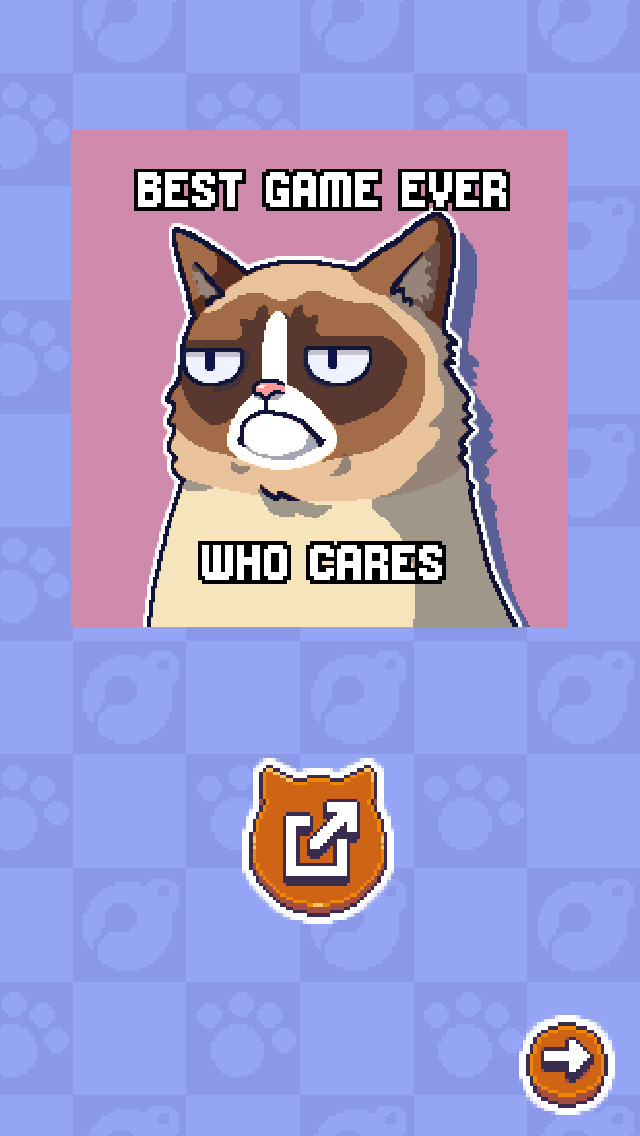 The Grumpy theme is completely on point and fully represented throughout the game, but it would just be a cute extension of her meme-ness if the mini-games weren’t fun. Luckily, this isn’t the case: there are enough challenges and a wide enough variety that even though you’ll be playing the same games repeatedly, they never feel monotonous. Lucky Kat Studios, developers of Combo Critters and Sky Chasers, are behind GCWGE, and their trademark attention to detail and engaging gameplay are at work here.

There are three different “worlds” to unlock which have their own theme of Grumpy stickers and mini-games. The Garden, where you begin, has Tardar doing fairly standard cat things—catching frogs and dreaming of golden fish idols. Grumpywood contains star-studded games, like Grumpy as a hands-off art exhibit and paparazzi dodger. And the Sports Pack shows off Grumpy’s athletic side as she rows a kayak to a finish line and races a go-kart into first place.

Each world comes with five mini-games standard and contains ten additional games that are unlocked by earning coins, for a total of 45 different games at launch. If you get the running Grumpy sticker, for instance, you’ll unlock her track-racing game while fishing Grumpy unlocks a goldfish-nabbing mini-game. There’s also a Remix world where all of your unlocked games are combined for an even greater variety, but you don’t earn coins for playing this mode. Even though new stickers and games are earned from spending coins on a gacha prize machine, it seems like you don’t receive duplicates—we’ve always earned a new Grumpy each time, and have won 14 games so far.

The games themselves are fairly WarioWare-esque: they’re extremely short and on a timer, so any goal must be reached before the very limited time runs out. You’ll be thrown into each game rapid-fire after the last one with the timer already counting down as you first figure out what to do. After the first couple of instances of a game, however, you’ll be able to tackle it right away as none of the challenges are very complex. Some involve simply tapping or swiping as quickly as possible, but there are also memory challenges, dodging games, a Where’s Waldo-style hunt, and other types of puzzles to keep things interesting. As you complete micro-games you’ll earn coins and the subsequent games will speed up, steadily increasing the challenge until you’re bound to trip up and eventually have to start over after failing to meet the goal three times. 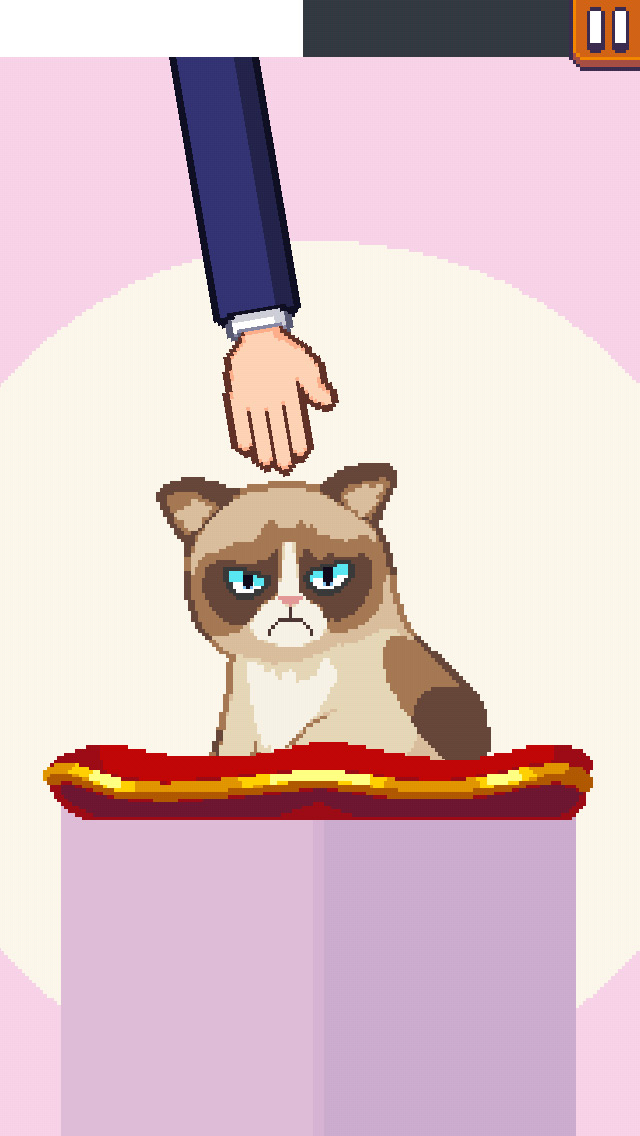 The micro-games do get pretty hectic as you progress but never to the point of feeling impossible. And your coin rewards—from completing games and as prizes for watching ads or just logging in—are generous when compared to how much new stickers and games cost. Everything in Grumpy Cat’s Worst Game Ever feels very balanced and considerate of the player, and Grumpy Cat herself is always charming and adorable, even when she’s shaking her head in disappointment at your lack of burger-flipping skills. We can’t help but want to jump in and try again to earn her less disappointed (but still grumpy) seal of approval.