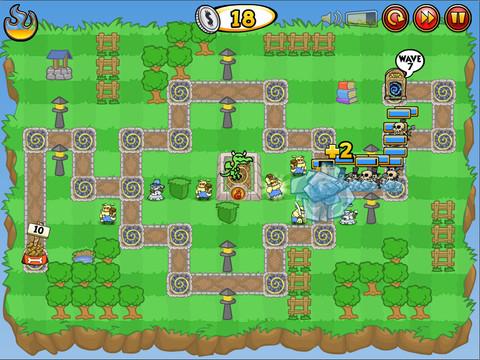 The most epic dinner of your life

Sure, Wizard101 is fun, and the pets your wizard collects can be helpful. But sometimes, you just want those little guys to stop following you around and do something even more useful – like guard dinner. Sounds strange, but it’s more or less the gist of Grub Guardian, a tower defense game that can be played in web browsers and iOS devices as a standalone game or a supplement to KingsIsle’s popular all ages MMORPG.

I actually wasn’t joking about the premise. Grub Guardian calls on you to prevent hordes of hungry monsters from making it all the way to a bowl of food. The bowl contains ten servings, and if the critters eat all of them, you lose. Succeed in fending off every monster wave and you’ll get a score plus a stat boost for your Wizard101 pet.

Your pet will earn his reward by leading the grub defense from the front, as you place him on the map first. Pets take up four squares on the map grid and have the most range, able to attack enemies in a wide radius. The more powerful your pet is in the MMO, the harder he’ll hit here.

Silver buys you smaller additional guardians that occupy a single grid space. You’ll receive a fixed amount of silver at the start of each map and earn more as you defeat enemies. Guardians come in 10 different types – Myth, Fire, Ice, Storm, Death, Life, Balance, Moon, Star and Sun – and each type has its own special ability added to its attacks. The abilities are mostly common sense, like Ice guardians slowing monsters and Death guardians having an automatic chance to kill monsters with a single hit.

Once your initial force is in place, the monsters start rushing out from generators at different spots on the board. They have to follow set paths to get to the grub, though in later maps they have multiple routes to take. Guardians automatically attack anything within their firing arcs, so the strategy is how best to cover the most spots on the path with overlapping attacks. Figuring out how the special abilities can work together is also a big part of finding success.

Every guardian can also be upgraded up to four times on the fly by spending increasing amounts of silver. Upgrading generally increases firing range plus extra damage, speedier reload time or added special ability duration. It’s a given that you’ll need to upgrade some guardians, but since you’ll get a better score and better goodies by having more silver at the end of the round, there’s something of a risk/reward decision to make every time.

Players who haven’t taken the Wizard101 plunge can borrow a pet to use in Grub Guardian, though the choices are pretty limited. Instead of pet boosts, borrowers will win codes they can use if they do decide to play the MMO that will give them gold, mounts, cards, reagents, elixirs or transformations. Obviously this works as a clever enticement to try the bigger game, especially since the codes are only good for 24 hours. 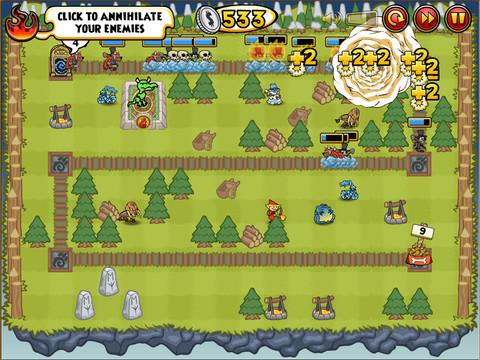 Like the other KingsIsle games, there’s a Crown Shop where real money can be spent to expand your playing experience. In this case, that means additional maps and access to extra categories of guardians on existing maps. There are over two dozen maps that can be unlocked without spending any Crowns, so there’s a fair amount of play to be had even without committing any cash.

Keeping with the kid-friendly tone of Wizard101, the monsters in Grub Guardian look more cuddly than menacing. This might actually be a turn off for older gamers, but it’s an understandable choice. The game plays in a fairly small window inside browsers that doesn’t exactly blow you away, so it feels more at home on mobile devices.

KingsIsle describes Grub Guardian as the first game that links to Wizard101 accounts, so it’s logical to assume it has more ideas on how to expand the experience if this one proves popular. The guess here is that people who enjoy the MMO will find this an essential companion since it’s an easy way to earn some extra bonuses, and other players who just want a simple tower defense challenge may get some entertainment out of it too. Here’s hoping, because someone needs to keep dinner safe.