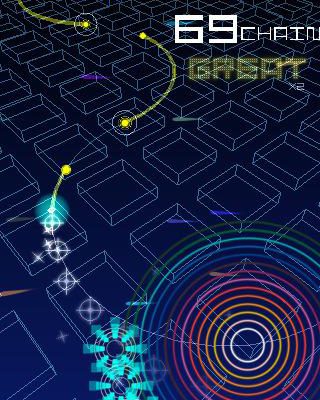 Music games are always at their best when they’re married to a catchy soundtrack and a unique visual presentation. With this in mind, Taito realized they had the perfect person to tackle their first major iOS rhythm title: Reisuke Ishida. Previously responsible for the trippy, challenging, and delightfully retro Space Invaders Infinity Gene, Ishida seemed like the kind of guy who might have the perfect vision for a rhythm game built from the ground-up for the touch screen. As it turns out, they couldn’t have been more right.

Featuring 15 different songs – many of which are from previous Taito games – Groove Coaster provides a wonderfully unique yet totally familiar experience that’s an absolute must buy for any fan of music games. Sporting a wire frame look similar to Infinity Gene, players in Groove Coaster will follow a glowing orb as it travels along a line. Every time the orb crosses over a circle, players need to tap the screen. Sound simple, right? Well it is – until you realize that, while the line and presentation appear to be 2D, they’re really occupying a 3D space.

This means that you’ll sometimes think the next circle is much closer or further to your orb than it actually is because of the way the line truly moves rather than what’s presented. The game does this through a clever use of angles that will mask the behaviour of the line, and sometimes hide some of it off screen. On paper this sounds like a terrible idea – who wants a rhythm game that’s going to deceive you? But in execution, the game is flawless. This is a rhythm game that tricks your eyes so that you’ll be more akin to relying on your ears.

After a few songs you’ll really get to learn the ins and outs what Groove Coaster is trying to throw at you. Things get progressively more interesting, with new elements being tossed in all the time. Tapping circles in rhythm to the music is something of a starting point, as soon you’ll be flicking your finger in different directions, pressing and lifting for set durations, and tapping up a frenzy along bumpy blue lines. Combine this with the wildly different directions the line takes in each level, and you have 15 different musical experiences that never give you a “been there, done that” feeling.

In addition to the actual rhythm gameplay, Groove Coaster offers something of a mock-RPG system between levels. Completing songs will earn you experience and level you up, which in turn will unlock new avatars and skins to let you customize the experience, as well as provide little tweaks and bonuses while equipped. There are also items available as in-app purchases that will help struggling players advance without frustration, allowing you to change several missed hits to a “good” rating, for example, or changing the flick targets into taps. 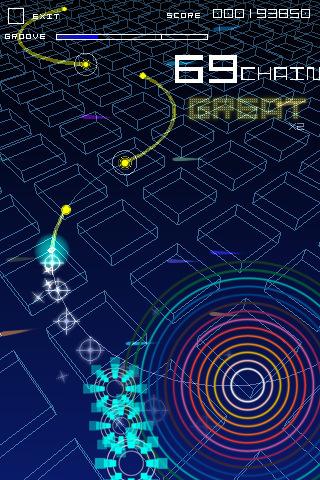 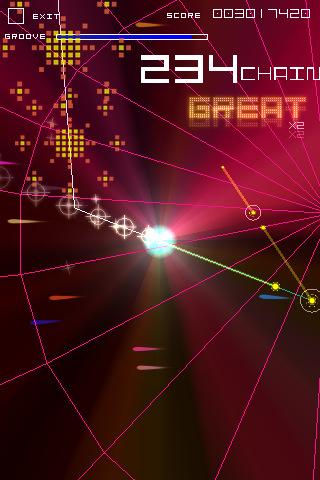 The only real complaint to be had with Groove Coaster is that there isn’t more of it. 15 songs is actually a pretty sizable package, especially for the budget price that Taito has set for this release – but the game is so good that we just want more of it. We’re really hoping Taito decides to add some more levels at some point, either as a free update or an in-app purchase.

With fantastic vector-inspired art similar to Ishida’s last project, and a collection of music featuring tracks from Arkanoid DS, Space Invaders Extreme, and original tunes from the Japanese music scene, every moment in Groove Coaster is a treat for the eyes and ears. Better yet, it has the gameplay to match. If you’re a fan of music games but have had your heart broken by other hotly-anticipated iOS rhythm releases like WiNTA, you’re in luck – Groove Coaster manages to deliver on every bit of hype that’s surrounding it.