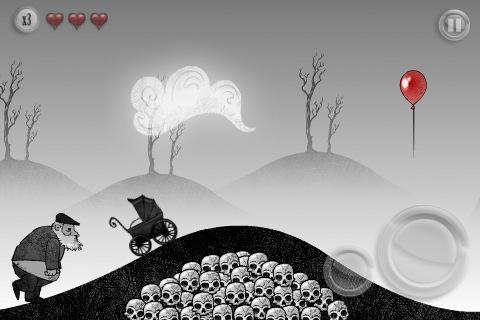 You won’t find many games that make rescuing a pram laden baby from the desperate clutches of a predatory man their aim sitting happily on the App Store. Were someone to read such a description without seeing Grimm in action, it’d be very easy to write it off as the wares of a madmen, its subject matter serving as nothing more than the perfect ammunition for cynical tabloid fodder. Quite surprisingly, however, Grimm is actually as traditional a game as you’re ever likely to come across.

Even gamers with the most modest of experience may well feel like they’ve tackled the likes of Grimm before, its play falling back on platforming staples from beginning to end.

But while Grimm undoubtedly comes with a familiar feel, it’s especially unlikely anyone will remember all too much about the actual fundamentals at play themselves, as harsh as that may sound. This is a game that has clearly put presentation above and beyond all other elements, taking time out to ensure it looks as polished as can be. If, like Robox Studios, you consider a certain visual prowess to be the most important element of any title, then this is most definitely the game for you.

It’s an approach that isn’t without its rewards, either. In terms of delivering atmosphere, Grimm scores especially highly, telling the tale of a baby left at a station as its mother boards a train unawares.

It’s then your job to use the iPhone’s accelerometer to guide the little one’s pram through a series of 2D stages populated by drunks, bats, giant swinging axes, malevolent Gods and, in short, scores of folk out to bring about the child’s demise.

Its obvious menace is brought to life by black and white visuals that make more than a passing reference to the likes of Tim Burton. Indeed, if nothing else, the game’s crisp style floods it with the kind of charm scores of other iPhone games would kill to infuse into their play.

When it comes to the game itself, however, setting the right scene only goes so far.

Grimm’s problems partly lie with it controls. At your disposal is the ability to jump via a button in the bottom right of the screen – leaping over everything from gaps in the track to on top of the heads of your adversaries is a pretty common occurrence. You can also bring the pram to a dead stop thanks to a neighbouring button, which is something of a necessity, given navigating the stages using only the accelerometer is trickier than it needs to be. 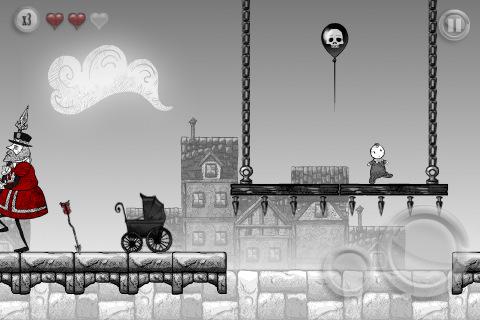 That’s because the handling feels way too loose. At times, leaping on top of your foe requires a finite level of precision – something that’s made especially difficult by Grimm’s slack approach.

Likewise, it’s also possible to use the baby as a slingshot, taking down enemies by launching the pram’s passenger in true Angry Birds style. But the scope of the game’s targeting system is so narrow, that getting up close to what are usually moving targets is often the only way of ensuring you hit the right spot.

It’s a frustrating set up, in truth, and putting up with it is made less likely as the levels pass and it becomes obvious that, flash looks aside, the actual design of the levels and challenges within is a touch bland. Most of the enemies are, in fact, faceless drones, acting like sentries without a cause and undermining that very atmosphere Grimm goes to such lengths to construct.

It all means Grimm leaves you with a slightly bitter taste in your mouth. Though this is a game with a clear identity and an obvious level of talent behind it, the experience is far too hollow once you scratch beneath the surface to warrant any extended play time. Ultimately, Grimm just doesn’t deliver the quality in terms of gameplay that its visual style promises, making it just as odd a package as its premise might suggest, albeit for entirely different reasons.

The Curse of the Ring Review