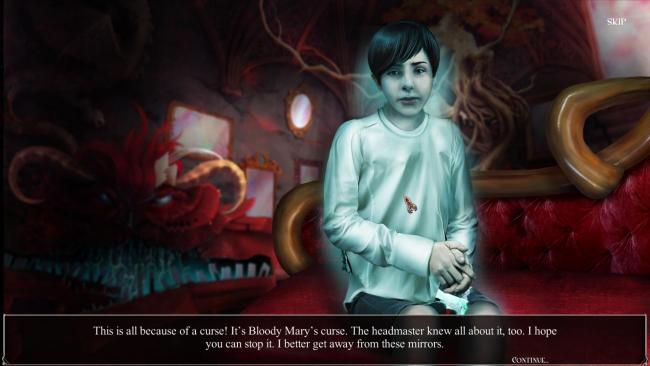 Childhood is a repository of memories—memories of friends made and dares taken. Who doesn’t recall being challenged by a group of trembling chums to turn off the lights, look into a mirror and repeat the words “Bloody Mary” three times? I remember the story of the soul-stealing ghost as one of the creepiest memories of my misspent youth, and it’s the basis of Elephant Games spooky but imperfect Grim Tales: Bloody Mary.

Your role in Bloody Mary is that of concerned aunt. When you receive a panicked phone call from your young niece, you race to her boarding school to discover the source of her fear. The school’s nearly abandoned; the staff have vanished, and the remaining children are behaving strangely, even violently. Responsible adult that you are, you decide to restore order. As is the case with these kinds of games, the answer lies in searching for clues in a series of chaotic rooms, finding weird items, and using them to activate even weirder mechanisms.

Bloody Mary’s best feature is its puzzles. Few (if any) hidden object games use puzzles for storytelling, but Bloody Mary often uses them to fill in the back story. Though not particularly challenging, they’re invariably good-looking, conceptually fresh (two standouts are a hand puppet puzzle and a projection puzzle) and effectively incorporate the game’s edgy horror motifs.

The downside of the gameplay is its dependence on finding items to fit into slots. The narrative does little here to drive what you do, and you’re expected instead to move randomly from room to room, noting which doors and boxes have unusually-shaped locks. You’re then meant to go back from room to room, collecting items that fit those locks and, well… unlocking them.

Unlocked doors and containers result in more unusual slots and more specially-shaped items, and the pattern repeats itself over and over. Yes, most hidden object adventures do this to one degree or another, but in Bloody Mary, it’s especially prevalent. 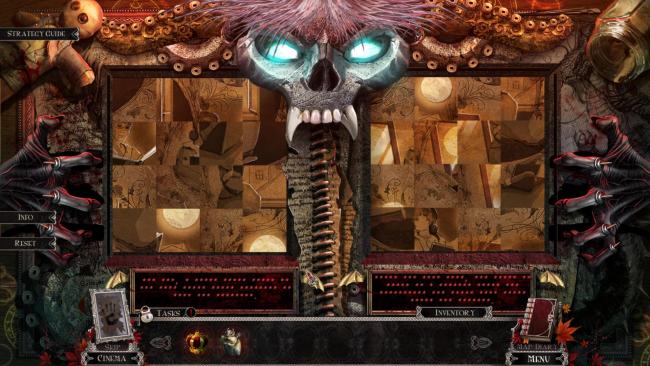 The effect of this design is that it precludes the need to think. With a fast-travel map that shows every objective, the need to consider what you’re doing or to progress logically in terms of the story totally disappears. Even with the map, locations start to blur together as mere collections of locks needing keys.

Other item-related issues are the too-convenient placement of them and the seeming arbitrariness of their use. What kind of villain imprisons people and then leaves the keys to their shackles lying nearby? And why prevent players from doing something simple until they have a too-specific tool? (In this scenario, a dagger can’t cut a flower. You need special clippers.) It’s not up to me to answer those questions, but I will say that both are silly and annoying.

These things show where Bloody Mary falls short, but there are many ways in which it succeeds completely. The game’s graphics, rendered in an unusually warm red/orange palette are undeniably beautiful. The characters are also nice and are reasonably well acted. The soundtrack is another win, and one particular melancholy electric keyboard track is the first I would enjoy listening to outside of a game.

Bloody Mary also deserves credit for an intriguing overall concept and an edgier execution than is usually seen within the genre. Strategically placed toys, creepy voices and a good number of startling appearances keep the scares coming and make us yearn for more games made in the true horror style. 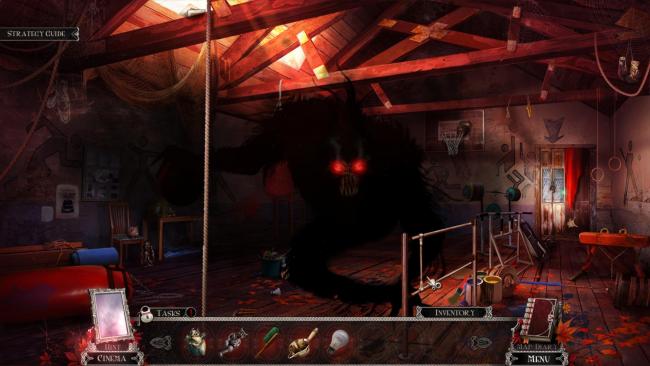 Bloody Mary has initially launched as a Collector’s Edition, including an epilog-ish bonus chapter that delves further into the Bloody Mary myth. This additional hour of uneven gameplay is characterized by a combination of underused existing locations and brilliant new ones, poor English translation (sample: “In coffins often hide important for a host of things.”) and too many obstacle repeats (How many times should one have to find a way to fix a zipper?)

Speaking of repeats, the extras also include another hour of gameplay called the Hall of Memories wherein you’re tasked with finding all the pages of a cursed book by replaying a good chunk of the same puzzles and hidden object scenes you’ve already played. Yay for the Skip button!

Even with the paddingand the arbitrariness, Grim Tales: Bloody Mary is well worth playing. Ithas some of the best puzzles and most well-triggered hidden object scenes we’ve seen this year. It also boasts some of the coolest graphics, nicest soundtracks and most unusual color palettes in the genre. If you can ignore its weaknesses: the obstacle repetition, tedious item use and poor translation, you’re in for a wonderfully spooky experience.