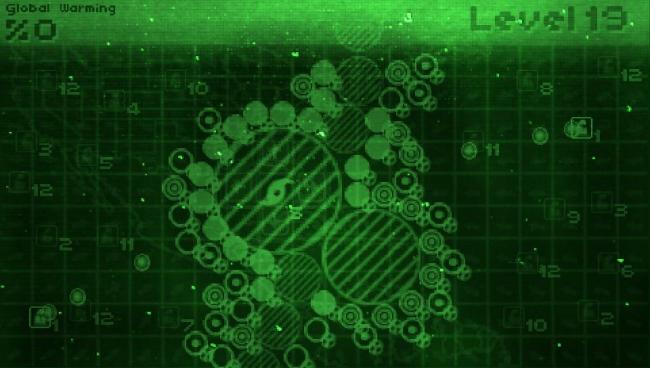 If solving the Earth’s pollution problems is as difficult as greenTech+ makes out, then we’re all doomed. Through a combination of hurricanes and cleansing factories, nasty clouds of ozone-destroying gas must be removed from the air, keeping the atmosphere nice and breathable.

If only it were that simple. greenTech+ is difficult from the get-go, and only ramps up the velocity throughout. Each level can be completed via puzzle-like methods, but progression is far too stunted and requires you play like a quick-witted god at every turn. It doesn’t help that the controls feel hopeless, with your influence restricted to a grid.

Over a total of thirty levels, you control a cyclone that is constantly pulling pollution clouds towards it. Clouds are churned out of factories dotted around the level, and must be directed into cleansing facilities. Each factory produces five clouds, and each cleansing plant can remove five clouds – hence, the idea is to consider where to lead the clouds, and maximise your chance of survival.

There are striped areas around each level that represent high-pressure zones. If a cloud enters one of these, it will be dispersed into the atmosphere, adding 10% to Global Warming. If a cloud touches your hurricane, the consequences are even worse, with 20% added to the total. If you hit 100%, it’s game over. You can also slow and quicken the speed of the clouds, allowing you to bunch them together to fit through tight gaps. This is the basic premise of the greenTech+, although it’s more of a puzzler than it first sounds.

The placement of the factories and cleansing facilities is what gives greenTech+ its edge. On each level, there is always a perfect formation of spots that you can take up, in which you’ll ace the level with 0% Global Warming. Finding the perfect areas to sit in is another story entirely, but on those rare occasions that you can find good positioning, suddenly the chaos becomes organised and it’s satisfying stuff. 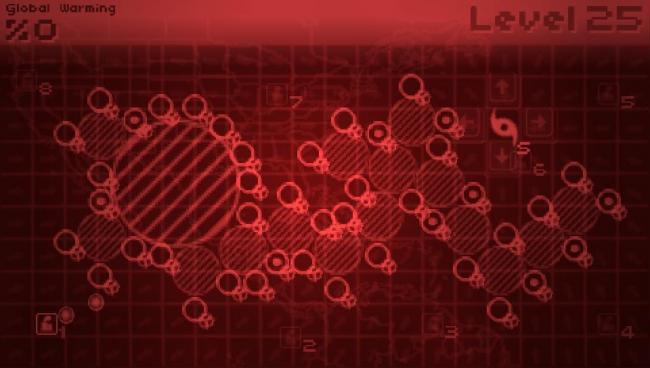 greenTech+‘s presentation is pretty charming, set out as if you’re watching the action through an old flickering monitor. As you play through the game, more screen types are unlocked, although the majority of them are simply different colours. The addition of a 3D theme is a nice touch – you’ll need the standard red/blue glasses to see it work. The music, too, suits the gameplay wonderfully, with some calming Bach acting as a balance to the not-so-calming action.

While greenTech+ is best played as a puzzle game, it’s far too demanding and will not let you progress unless you first master the levels you’ve been assigned. Getting 0% pollution on a level will award you with a Perfect rank, and these are essential to unlocking further levels. Unfortunately, grabbing Perfect ranks is easier said than done, and you’ll most likely end up having to play the same couple of levels over and over again to the point where it’s just not fun anymore.

For example, there are five levels in each tier. To unlock Tier 2, you’ll need to get two perfects in Tier 1 – this isn’t too difficult. However, to unlock Tier 3, you’ll need to get six perfects over the ten levels in Tiers 1 and 2, and this is pretty challenging. After that, it just becomes next to impossible, and we found frustration easily outweighed fun. Quite why the game wants you to perfect each level before moving on is beyond us.

The controls are also quite ridiculous. The original free version of greenTech allows you to move the hurricane via your mouse, and this works perfectly. However, greenTech+ has ditched the mouse control for a keyboard approach – not only that, but you can only move the hurricane inside squares of a grid.

The Vertigo Games site explains that this was done so that the developer “knew exactly where the player can and can’t go,” and it could “pack levels to the breaking point with a ton of obstacles and factories.” We’d argue that it instead gives the game a more restricted feel, as if you aren’t fully in control of where the clouds are headed.

greenTech+ is not for the faint-hearted. Restricting levels so that only the best players can actually see the game through wont’ sit well with some gamers – although the $3.95 price point does sweeten the proposition. Try playing the original (and free) greenTech to get a feel for things before putting money down for this release.