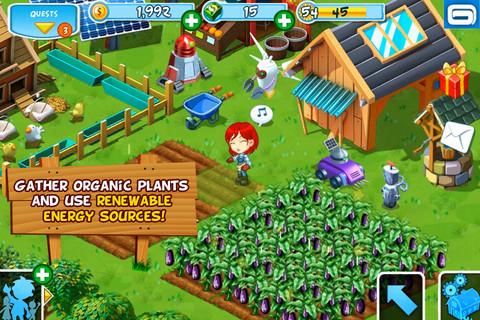 Gameloft has launched the newest incarnation of its popular farming title, Green Farm, with Green Farm 2. This new app brings all of the favorites of the previous mobile title back into the fray, but presents them in a new, three-dimensional, format. Though it hosts higher quality visuals and push notifications, the game is not all that distinct from its predecessor. That said, the title is solid, despite its aged genre.

For those of the Facebook social gaming demographic, Green Farm 2 is basically a FarmVille for the mobile space. Containing any number of simulation mechanics seen in past games of its ilk, it isn’t the most unique application on the market, but as far as farming titles go, it’s one of the better made ones. For those unfamiliar with the original Green Farm, players take on the role of a cartoonish farmer and pave their way to success by growing crops, raising fauna, and generally creating the best looking space one can.

Using the touch screen interface, players are able to plow expanses of land in order to plant the seeds of various crops and after a period of time, they can be harvested, sold, and the land replowed again. The longer the crop takes to grow, the greater its value. Unfortunately, the game still keeps with the older mechanic of plants wilting should they not be harvested quickly enough. This is remedied slightly with the inclusion of push notifications, should the user opt for them.

Along with plants, players can also purchase various farm critters that can be grown and sold as well. However, these must be fed periodically, lest they run away. As an added bonus, they can be added to certain buildings (e.g. chickens in a chicken coop) to make that building periodically spout out money. In addition to this revenue stream, players can also construct other structures that periodically generate income as well as harvest various trees.

The game begins to stand out a bit more once players reach level 10 and can opt for a specialization. Once at that minimum level, users gain a “workshop” in which they can specialize as a tailor, gardener, artisan, or carpenter. This gives a bit of uniqueness to each farm as players can then craft items centric to these classifications (e.g. clothes or crops) that other players cannot.

Though not entirely new to Green Farm, as a pair of games, players are also tasked with things like quests and predators. The former is fairly standard, as users are periodically given tasks such as “plant X number of Y,” but latter is interesting. Farm animals left outside of buildings have a chance of being spirited away by hungry creatures, so players can actually buy pets like dogs to protect them. If one doesn’t have a pet, they can also still put farm animals inside respective buildings. This not only protects them, but also garners a chance at receiving baby animals, as well, to grow and sell.

There are growth and convenience bonuses as well. As players level up, they can buy vehicles to till their lands in bulk as well as purchase fertilizer to increase crop value. That said, these features typically require virtual currency purchases. There is also the fairly standardized social mechanics of visiting the farms of friends and sending them gifts that primarily consist of decorative items. 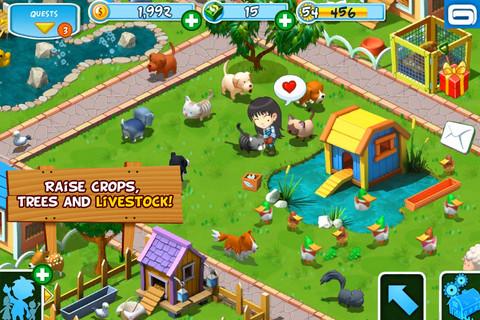 The only real downside to Green Farm 2 is that it doesn’t really feel all that distinct from the original Green Farm. Rather than a sequel, it feels more like a visual upgrade.

Other than that, the only issue that comes to mind is that the touch controls can be a bit finicky. When plowing new land, the grid space selected doesn’t always line up where one touches, and sometimes the game bugs out and makes plots of land unusable (this appears to fix itself after the game has been turned off for a few hours).

Overall, Green Farm 2 is a quality game from a play stand point, but it doesn’t offer anything truly new. That said, it is a fun app in the right hands, and despite the wide variety of farming simulation titles, this is one of the better ones. Offering players a great deal of things to do, it allows for a strong business aspect to play as well as quality decorative elements. If players are fans of the farming niche, then Green Farm 2 is well worth a play.