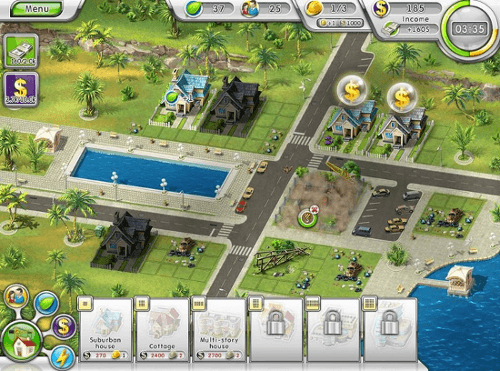 Saving the city one park at a time.

Green City is a building game similar to Build-a-lot 4: Power Source and Plan It Green that focuses on resource management while tasking you to rebuild an entire city. You’ve also got to keep an eye on the Earth, cleaning up the town’s act so they stop tossing garbage out the windows. Mind that eco score while clearing out the rubbish and you just might make some progress!

Margery Pickles is going to change the world. Or, at the very least, she’s going to change this city. Living in a town where people didn’t care about the environment always frustrated Margery, so when she grew up she decided to do something about it. She contacted Ecology Ltd and convinced them to send over an eco specialist. The town has grown so filthy that people are just abandoning their homes, leaving piles of junk in the yard and on empty lots. But with Margery and Ecology Ltd working together, they’re going to fix up this place and make it a clean, green place to live.

Each level in Green City puts you in charge of managing workers, collecting rent, and building new structures on vacant lots. The left side of the screen shows a series of goals you must meet in order to proceed, tasks like building a certain type of house, reaching a financial goal, or increasing the population beyond a set number. You do this by clearing away useless structures and replacing them with happy, functioning units. The more clean houses you have, the more people will move in, and the more people that move in, the more money you can make. Yay capitalism!

Green City also concerns itself with ecology, represented by a leaf icon. Houses have an eco number that rises or falls depending on a number of factors. Place parks and promenades near a house, for example, and the eco number will rise. If piles of garbage and rundown lots are nearby, the score drops. For the most part the leaf represents your overall efficiency and attention to detail, so as long as you’re playing well, you won’t have too much to worry about. 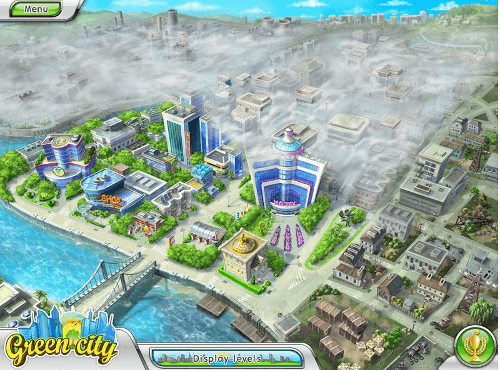 Green City adds more buildings and more things to manage in later levels, such as upgrades, worker pools, power plants, and more advanced housing units. It all ties back in with the main theme of the game quite nicely, allowing you to monitor basic energy needs vs. pollution and weighing everything in light of that all-important eco score.

Levels are timed in Green City, and the longer you take the fewer stars you’ll receive as a reward. The timer runs a bit slow, so even on early levels you’ll have five or even ten minutes to get things done. If you don’t conduct your actions just right, however, you’re out of luck. Green City has an all or nothing element to its design, which is great when you’re performing within the “all” specification, but slide a bit towards “nothing” and you’ll find yourself waiting around to collect rent money with nothing to do but watch the clock tick away. You can’t really recover from major (or even minor) mistakes, so it’s generally best to just restart the level if you see things aren’t going so well. 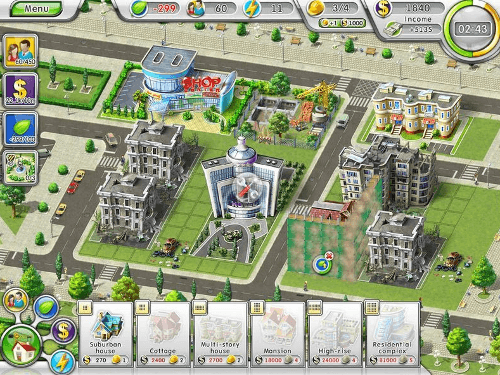 The building genre made popular by Build-a-lot doesn’t see a lot of innovation, but Green City at least tries to put on a new coat of paint. The graphics are bright and cheery, gameplay moves at a nice clip, and the difficulty doesn’t spike too much, leaving you to sit and enjoy a charming game with an Earth-friendly (and Al Gore approved) message.