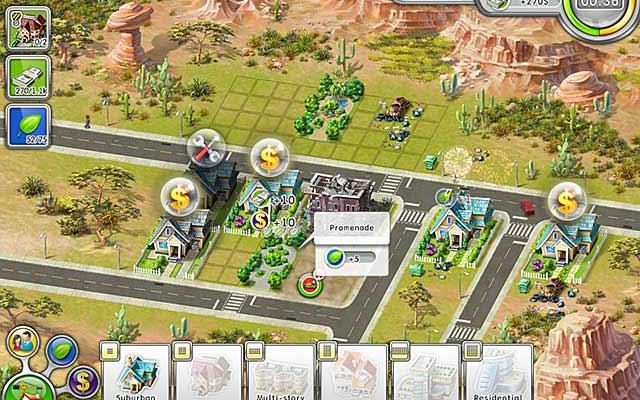 Green City 2 doesn’t change much from the original, but still proves to be a fun and challenging game.

Green City 2 is the latest in a long line of “real estate” time management games like Build-a-Lot, and it follows up the release of the original Green City that was released earlier this year. This sequel is almost identical to its predecessor, and simply offers dozens of fun new levels for players looking to continue cleaning up the world, one trash-ridden level at a time.

Green City 2 sees players traveling to a new town full of folks that could care less about the environment. In each stage, players will be challenged with balancing the use of resources (most importantly money), while completing goals that are specific to each stage. Whether you’re required to build a specific number of homes, increase the area’s “Eco” rating, or even demolish some of the nasty coal plants or abandoned buildings that have been left in your way, each level only contains so much land space to work with. The game then becomes a challenge in trying to determine which buildings to place on which plots, while also keeping in mind the differences between the overall sizes of buildings. 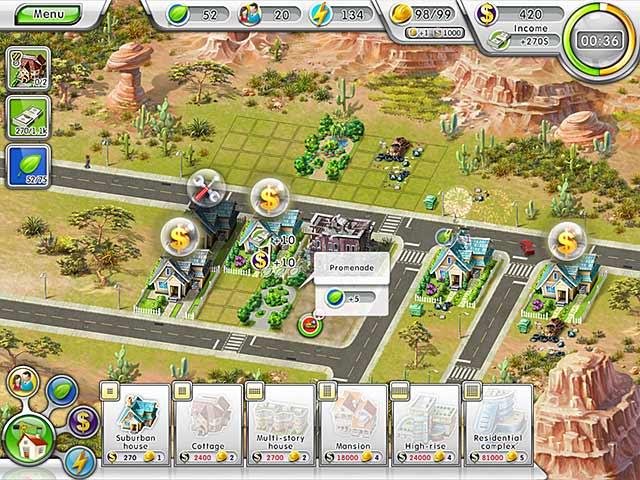 All of the expected elements have been carried over from the original Green City. Each building offers a population rating to the town, and in the case of homes and businesses, decreases the land’s Eco rating (environmental friendliness). Eventually, these buildings will also start to consume electricity. Upgrades allow buildings to be more eco-friendly, or more energy efficient, giving you the chance to build more homes and businesses before resorting to building power-producing items like Windmills.

While some buildings have bases so large that it’s immediately clear where they need to be placed (based on the limited number and arrangement of tiles in your current neighborhood), other items are much trickier. Players are encouraged to sell buildings for a quick profit (while not losing the population they add to a stage), but more often than not, you’ll be forced to demolish buildings entirely to make room for new items, whether those items are larger businesses and homes, or even parks and promenades to finish off a current Eco-related task.

Since some buildings in Green City 2 cost so much, there are plenty of levels that drag a bit towards the end, as you’ll need larger and larger amounts of money to upgrade items, construct new buildings, or otherwise complete your required tasks. Levels definitely aren’t linear, and while there may be an obvious layout for all of the items you need to build, sometimes this final solution is hard to figure out until it’s too late to earn the highest rating of three stars on a stage. 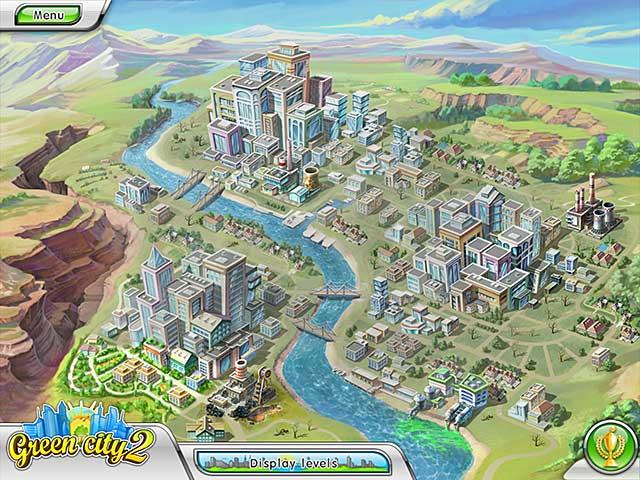 It’s impossible to fail levels, as players are able to continue playing long after the timer has run out; but players looking for a challenge can also replay these stages time and time again in order to earn better scores (and more stars). Achievements also provide a hit of replayability, as they’re rewarded for completing many tasks in bulk across large amounts of levels.

The first Green City didn’t do a lot for the “Build-a-Lot” genre, and Green City 2 does even less. Still, this sequel is definitely a fun, challenging ride for fans of the genre or of the previous game, and it’s well worth the price of admission.