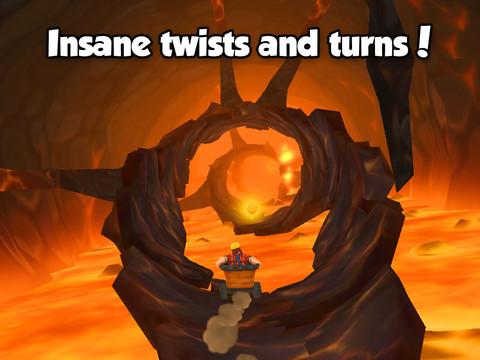 This mine is yours.

Your Wario-esque approach to finance has landed you in hot lava, literally. The lizard from The Magic School Bus has taken a hit of Ninja Turtle mutagen, and is prepared to pursue you relentlessly on his tricycle, determined to recover the aurum you pilfered. Fortunately, everyone knows that lumberjacks dwarves are expert mine cart operators, especially carts of the anti-gravity type. Ride on Greedy Dwarf, ride on.

The absurdist, phoned-in spin on the classic stealing-treasure-from-the-dragon trope belies a competent, demanding, and mercifully not endless game. Greedy Dwarf’s gameplay will inevitably call up memories of hours lost to Super Hexagon as you maneuver your cart through all 360 degrees of the cylindrical tunnels. Assuming normal gravity, your only inputs are turning or jumping, the latter act requiring you to tap both thumbs simultaneously. It’s an odd input to adjust to, and you’ll have to adjust quickly, because you’ll be asked to change direction in mid-air almost immediately. One of Greedy Dwarf’s high points is the unusually fast ramp up of new mechanics, complimented essentially by no death penalty and mobile-friendly stages.

Greedy Dwarf is broken down into 33 levels with the potential for more content in the future. While each course is over before you know it, the developers weren’t afraid to put the hardest jump at the end, and there are definitely cases where some foreknowledge of the obstacles is all but required. In addition to simply passing the finish line, collectible gold nuggets litter the cavern surfaces like rings in a Sonic 2 bonus stage, and optional rocket boosts that function like instant Mario Kart mushrooms also count toward your completionism. Greedy Dwarf isn’t weighed down by hundreds of throwaway courses; if you like this game, you might actually 100% it.

Like all but the best mobile titles, Greedy Dwarf puts its bad side forward with only passable visuals and music. There is little if anything to endear here in terms of aesthetics or characterization, and the absolutely painful grunts and screams of your rider will have your phone muted in an instant. Strangely, rather than ever showing the dragon pursuing you, you begin each level from a dead stop, and end in a gold-filled room, seemingly unrelated to the one you pillaged in the game’s frame narrative. 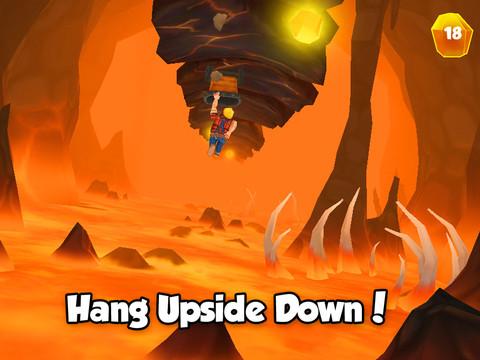 Greedy Dwarf is a compelling amalgam of quality game mechanics that doesn’t take the lazy endless runner route and doesn’t waste the player’s time with chaff. Drag it out into the harsh light of day that Tiny Wings occupies and you’ll find that it looks like, well… a dwarf, but you’ll be content to stay underground with this one for a while.