Greedy Bankers vs The World Review 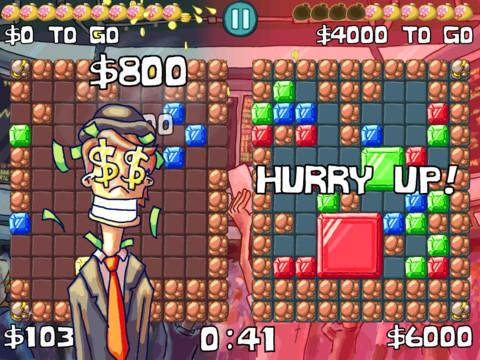 They’re still greedy, and this time they’re even more fun

Greedy Bankers was a surprising treat when it was released on the App Store back in February. Not only did it feature some great puzzle gameplay, but it also contained a lot more charm than many big-budget iPhone games. Now, we have Greedy Bankers vs. The World, a beefed-up pseudo-sequel for the iPad. This updated (literally) larger title has a slew of new features but it still manages to provide all the fun of the original.

The biggest new feature is that the game has a brand new mode that lets players engage in what are essentially head-to-head battles. The gem-matching/money-acquiring gameplay is still present, but there’s an element of competition between players and the AI opponents. This is actually pretty fun, as it adds an extra element of urgency of the game in general, which in turn makes things feel even more fast-paced.

The head-to-head gameplay is presented in two different modes: Story mode and multiplayer. The story mode features a plot where players have to investigate what caused the economic crash of 2008, working their way up through the ranks of the titular greedy bankers who’ve stolen all the world’s riches. Each new banker is more formidable than before, and they become increasingly tough to defeat.

The multiplayer mode, meanwhile, probably isn’t what you’d expect. Instead of competing with other players on the Web, two players have to physically sit down and play against each other, using the same iPad as their shared game board. Admittedly, this is actually a lot more fun than one might expect, especially since players can physically steal gems from one another. Still, it’s a shame that there isn’t an online element to the game.

Not surprisingly, the production values are still rock-solid. The graphics still have the lovely, hand-illustrated look that was present in Greedy Bankers, and they hold up really well on the iPad’s larger display.

The soundtrack, meanwhile, is really wonderful. The music is really jazzy and sounds a little like something from a 1980s soundtrack; that last bit is only meant as a compliment. Honest. The 80s had some great jazz. 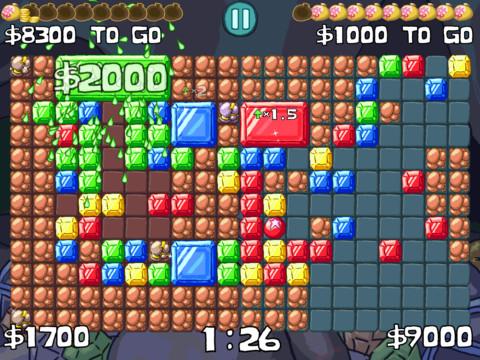 Greedy Banker vs. The World is an excellent follow-up to an already-great game. It’s incredibly fun and goofy, the new gameplay modes add a lot of extra enjoyment, and things are even more stylish than before. If there were an online multiplayer mode this would pretty much be perfect, but even without it, this game is still totally worth owning.