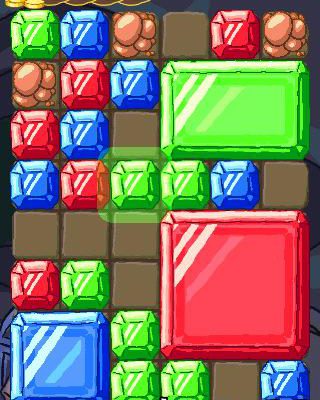 I’m not sure if there’s currently a group of people more despised than greedy bankers. If there is, I’m fairly certain that I don’t want to meet any of them. That said, I certainly enjoyed being as one thanks to Greedy Bankers, a charming new puzzle game for the iPhone.

There’s no real plot to speak of, only the driving goal to keep on acquiring more money. This is accomplished by tapping on gems that populate the map, and players can drag the jewels around the screen to group them together. Each level has a set amount of money that players have to earn before the time runs out.

Grouping jewels creates larger gems that are worth significantly more than the individual ones; these are necessary to create and cash in on when later levels start setting pretty massive cash benchmarks. Individual gems are worth $100, while two-by-two gems (the smallest size that a player can create) generate $800. Honestly, the game plays like a mix of Puzzle Fighter and Tetris, though any such comparisons are only meant as a compliment.

Extra challenges are added in by having new jewels drop down into random spots on the screen, mud blocks forming impenetrable barriers, and robbers who will sneak around the screen and grab up any gems sitting in their path. And while there’s no way to get rid of the robbers, they’ll eventually drop off the map when they’ve stolen enough money. Needless to say, it quickly becomes a challenge to group the gems together and earn enough money to advance to the next stage.

While Greedy Bankers is very fun, Greedy Bankers is also very cute. The title screens almost look like they were designed by Sylvain Chomet (who made The Triplets of Belleville, a truly beautiful animated film). While they aren’t nearly as charming as their static counterparts, the in-game graphics look just fine. The music, in turn, features a lot of playful synthesized guitar and works nicely with the 8-Bit sound effects. That said, the soundtrack gets a little old after a while and it’d be nice to have the option to play one’s own music. 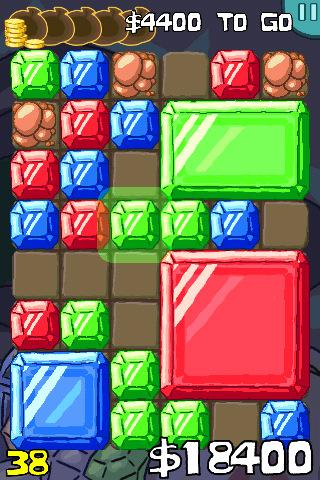 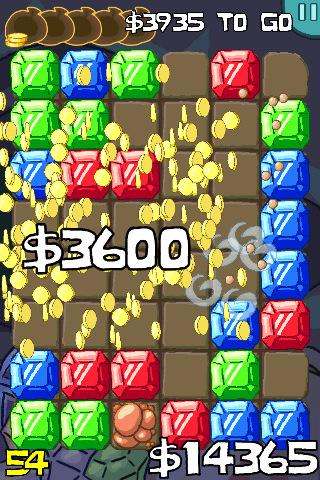 The only real problem with the game is that it’s only got one game mode. This isn’t really a bad thing, but it would be cool to have a couple of different game types – maybe even a head-to-head version that gamers could play via Bluetooth or over local networks.

Greedy Bankers is one of those games that doesn’t have a lot in it, but what there is to do is certainly fun and addictive. It’s a great way to kill a few minutes at a time – it’s immensely enjoyable and fast-paced fun.