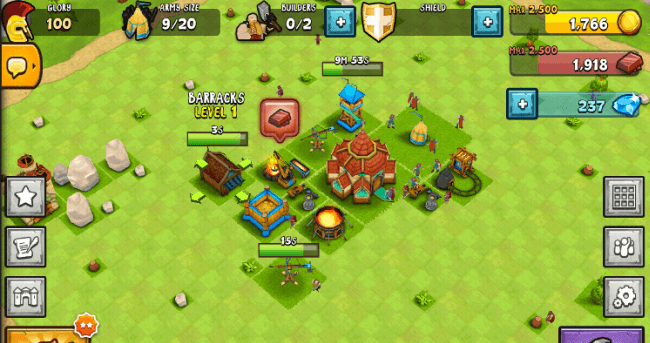 Greed for Glory: War Strategy enters the freemium field with exciting but strangely run-of-the-mill gameplay. It’s similar to titles like Battle Dragons and Clash of Clans: the only real difference being a new setting and art style. But despite lacking any sort of innovation, PerBlue’s medieval-themed building/combat sim will keep you strangely captivated for weeks on end. Just go easy on the diamonds, okay?

Greed for Glory puts you at the helm of a small village looking to become more than a collection of wooden huts. Build new structures as you mine iron and gold, collecting as much currency as you can so you can raise a massive army of archers, knights, and wizards. With all of those trained soldiers milling around, might as well head out and attack nearby villages, right? Increase your fame (and your loot) by sacking other towns, slowly expanding and upgrading your base to accommodate your newfound power and glory.

Greed for Glory sticks with the basics as far as building and resource management are concerned. A simple icon-based menu system allows you to choose which structures to place and where to place them. Quarries and mines pull iron and gold out of the ground, while barracks let you train troops to send into battle. Builder shops house workers, trebuchets fling stones at enemies, and still more buildings help you store your riches, upgrade your armies, and keep your village safe from attack. The screen is a little cluttered with information, but it’s something you quickly learn to ignore, as what’s happening in the center is far more interesting!

Fueling all of this is a three-tiered currency system that focuses on gold, iron, and diamonds. You can mine and store gold and iron currencies with basic buildings, then turn around and use each to build more things and upgrade existing structures. Diamonds function as the basic hurry-up currency, and Greed for Glory isn’t shy about encouraging you to use them. Don’t want to wait ten minutes for your archers to train? Diamonds. Need an upgrade but can’t wait 45 minutes? Diamonds by the boatload. Just like iron and gold, you earn diamonds through conquest and completing achievement-style tasks, but the rate at which they refill is painfully slow. The balance of freemium versus forced microtransactions is slightly tipped to the latter, though not so much that patience can’t win in the end.

Once your town is set, you’ll definitely want to head out and start attacking things. Combat takes place in the same point of view as city management, allowing you to pinch, zoom, and pan around the screen as you search for the best area to drop your troops. Squares marked in red are out of bounds, forcing you to summon fighters away from city defenses. Simply tap to deploy, then sit back and watch the battle commence. Fighters are generally not very intelligent, which can occasionally be frustrating. Why are they whacking a hut when a giant crossbow is shooting them in the back? This forces you to be a little more conservative and strategic in how you bring on your attack.

In the end, Greed for Glory: War Strategy comes across as a well-made but fairly standard freemium building game. The emphasis on combat keeps things exciting, but the strong tilt towards spending money on refilling your currencies detracts from the overall staying power of the game.