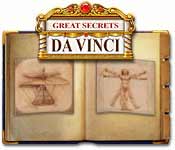 Would it be a stretch to say hidden object games produce more revenue for the eye drops industry than spring allergies and windy beaches combined? Just think of the effect on your peepers if you were to play the item hunting games released in just one month from beginning to end! The good news for those of you suffering from eye strain is that you can skip Great Secrets: Da Vinci.

The “great secret” to which the title refers must be that there was nothing at all fascinating about the life of the famous Renaissance painter. Although the genius of Da Vinci led him to accomplish great things in nearly a dozen scientific and artistic pursuits, Great Secrets would have you believe he spent most of his time picking apples and tidying up cluttered rooms.

The story, such as it is, follows Da Vinci from his days as a young apprentice into old age. As he journeys through life, meeting such notable personalities as Amerigo Vespucci (who died 40 years before Da Vinci was born) and traveling as far east as China, he gathers the clues that help him discover the Philosopher’s Stone, a legendary substance capable of turning inexpensive metals into gold. It was also sometimes believed to be a way of making people younger.

Unfortunately, the storyline is unrelated to the actions you perform while playing. Rather, as you progress through the game’s 14 chapters, you’ll scour the screen for hidden objects that have nothing to do with finding the stone, look for the differences between two versions of the same scene and play simple mini-games.

For example, not long into Great Secrets, you learn by reading Da Vinci’s diary that he’s moved in with his uncle, who regales him with stories about the stone. While you might expect the next level to involve something related to the legendary concoction, such as finding pieces of paper containing a supposed formula, you’re dumped into a typical seek-and-find scenario and told to “Find all the birds.” Huh? Are they carrier pigeons delivering instructions from the pope for creating the stone? No, they’re just birds, and you have to find them.

If you can’t locate all of them, don’t worry. You get one hint up front, and once you use it, you’ll get another one in 60 seconds. Since you’re given nine minutes and 59 seconds to complete each level, that comes to nine hints per stage, which is pretty darn generous. Although you have to find more objects per stage as Great Secrets progresses, I rarely dipped below the five minute mark. In fact, I finished the game in less than three hours, which isn’t enough time for the asking price.

The mini-games, of which there’s one per chapter, involve either memory-matching tarot cards or clicking the pieces of one of Da Vince’s paintings into place. There are two versions of the latter game, one of which involves clicking on a piece and then clicking where you think it goes, and another that consists of rotating a piece until it’s turned the right way. I had a little fun playing the first game, but with regard to the second one, how much easier can casual games get before they’re no longer considered games?

At the end of the day, that’s the problem with Great Secrets; there’s no challenge and nothing unique to do. Once you’ve played the first chapter, or any other recent hidden object game, you’ve experienced everything Great Secrets has to offer. From there, it quickly grows monotonous.

For die hard fans who insist on trying every hidden object game or for casual users who enjoy a no frills experience, a few more caveats: First, some of the item descriptions are very vague due to translation issues. For example, I spend about a minute looking for a “clew-balle” when the ball of yarn was right in front of my nose. A hint took care of that. Later, I was told to find a “candle stick” that was actually a candle holder, a “sandwatch” that was an hourglass and a “stick” that was a fork. You won’t run into so many of these you can’t finish a level, but they do make you appreciate developers that properly localize their games.

You also have to be very precise with your clicks, which wouldn’t be a problem if the game didn’t penalize you 20 seconds for clicking too many times without hitting home. You’ll also run into instances where you’ll be asked to find an object, such as a plate, and even when you find one, it might not be the plate you’re supposed to click. There are also occasions when the item to be found is almost impossible to see without a hint. (A red frog planted among roses comes to mind.) And no review of Great Secrets would be complete without mentioning the anachronistic appearance of the modern No. 2 pencil in several scenes.

I also liked how the Mona Lisa showed up on the wall of a storage area in the Vatican, but I really should stop harping on the game and bring this to a close. Essentially, Great Secrets comes across as an attempt to cash in on the Da Vinci craze that started with the Dan Brown novel. That would have been fine if the idea had been wrapped around a game worth playing.

The Count of Monte Cristo Review