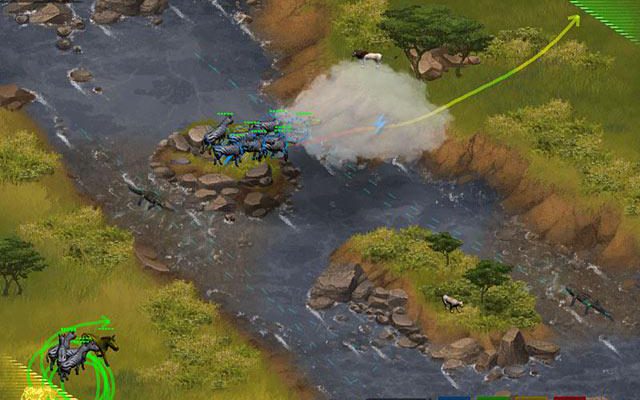 Great Migrations is a line drawing game, not unlike Flight Control on the iPod/iPad. You’ll guide animals from one side of the screen to the other by painting a line for them to follow with your mouse. You’ll avoid predators and other dangers while trying to take advantage of things like wind to aid you on getting all the animals migrated safely. As things progress you’ll have more and more dangers to deal with, though the game is always ready to throw you a helper to keep you on a relatively level playing field.

In the first stage you’ll be steering and controlling Monarch butterflies from Mexico to the mid-west over 4 legs (each with 4 waves) of their journey. After each leg you’ll have your progress assessed and be given points for how well you did. You’ll need to avoid both birds and bugs on your travels to safety as both of them can be deadly. After finishing with the butterflies you’ll move onto Salmon, Zebra and Red Crab migrations. All play out somewhat similarly though you’ll have different predators to worry about obviously. 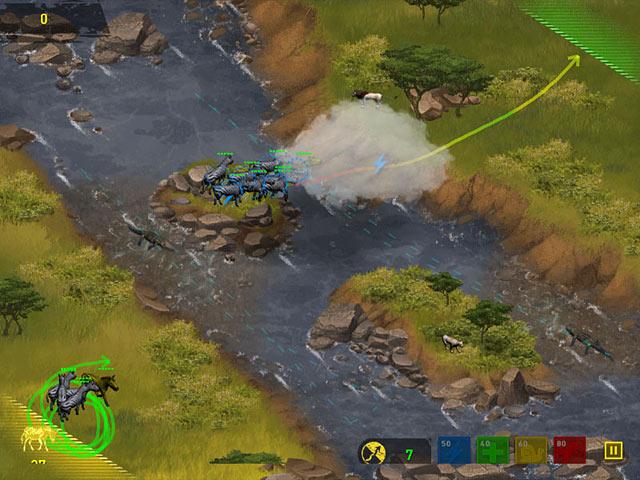 If you’ve played line drawing games before this one is definitely in the same vein as those other titles. Quick thinking and pre-planning are essential in getting everyone to safety, as well as knowing when you need to quick change direction at a moments notice to take advantage of a predator moving out of the way or a helpful current.

That might make the game sound hard and while it’s not simple I don’t think I’d call the game difficult on the standard setting. There are a few difficulties both above and below the default however so if you’re looking for a game for the kids to play or really want to challenge yourself you can certainly tweak how hard it is. Good thing too because this game is really solid for kids with it’s simple to understand premise and backbone of nature education.

I didn’t have a ton of problems with Great Migrations but the ones I did are worth mentioning. First off is the game’s resolution. When you start the game it defaults to full screen mode which leaves the graphics looking a bit blocky, like the game is trying to run at a higher resolution than it should… which is exactly what I think it’s doing. By changing over to windowed mode the graphics are nice and sharp and feel much nicer while playing. 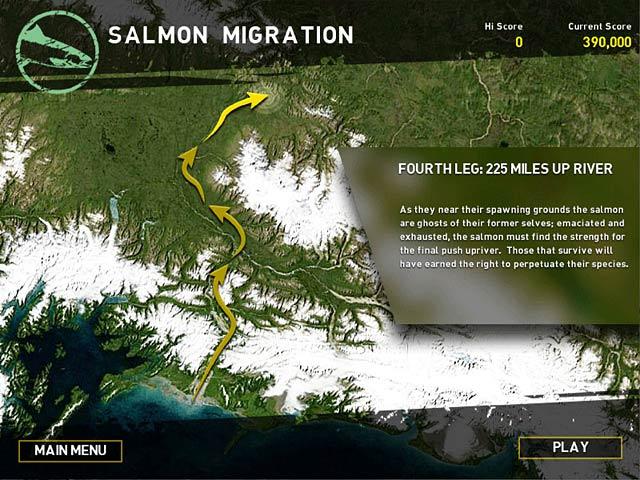 The game also suffers from a super thin set of instructions. You’re given the barest of explanations of what you’re doing but most of the nuance is totally on you to figure out. The game tells you what your purpose is in each level, but never really explains how scoring works beyond saying “you’ll score points.” The game also locks most of it’s content away at first, so to unlock anything you need to play through it all. I’d have liked the chance to take a break from the butterflies and try something else.

There were numerous times during my play of Great Migrations that I thought to myself how perfectly this would work on an iPod or iPad. If you’ve played and enjoyed games like Flight Control then you know how well line drawing games work with a touch screen involved. In fact I’d argue it’s one of the genres that the touch screen excels at. I’d love to see a port to the iPod or iPad at some point in the future! But until then this PC game is definitely worth checking out.

Great Migrations is now also available for iPhone and iPad.