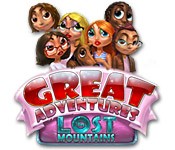 Great Adventures: Lost in Mountains is a bit hard to classify. It’s not as deep as a sim game, nor as hectic as a time management game, but there’s no denying that the cheerful aesthetic and likeable characters lend the game a certain appeal in spite of the fact that it has little to no long-term replay value.

In Great Adventures you control two characters: a woman who’s smart, nimble and good at crawling through small spaces, and a man (presumably her husband) whose talents include fixing mechanical gadgets and moving heavy objects. Alternating between the two characters is the key to solving the various situations and puzzles that the game throws at you.

As the game begins, we find the couple racing along a treacherous mountain road during a snowstorm heading towards the hotel where the woman last heard from her father, a world-renowned scientist, in a frantic phone call saying that he was in trouble. Upon arriving at the hotel, the couple finds that it has been evacuated and there’s no sign of the scientist. With your help, they have to figure out how to gain access to the hotel’s locked rooms and explore them for clues as to the whereabouts of the scientist and his important invention.

The game is presented in a top-down view that is similar to sim games like Artist Colony or Little Folk of Faery and time management games like Nanny Mania. Using the mouse, you can make characters walk around the environment and interact with it, and pick up a wide variety of items. Some items are added to an inventory and can be used elsewhere, such as keys to unlock doors, or tools to repair machines to restore power to the hotel and so on, while other items – like lanterns, firewood and butterflies – are collectibles that boost the characters’ Food, Rest and Fun levels. Certain items can also be combined to make even more useful ones.

You can use the mouse to scroll to any part of the screen, and there’s also a small overhead map so you can see where each of the characters are at any given time. Left to their own devices, they’ll wander around, watch TV, take food from the fridge, and generally take care of themselves.

Some parts of the game – in particular, the locked doors – have puzzles and mini-games associated with them, such as variations on Sudoku, various slider puzzles, and easy trivia challenges (like "What’s the name of the mountain where the Greek gods live?" Answer: Olympus.) More thought seems to have been put into these mini-games than in some other casual titles, and I found them to be clever, challenging and enjoyable; nevertheless, they can all be skipped if the player desires.

Unlike some other sim-type games, Great Adventures is extremely linear. The game spells out exactly what you need to do next via a checklist with tasks that get crossed off one by one as you complete them. Some of the very first tasks, for example, involve finding the key to the hotel in one of the cars parked outside, then locating a shovel to clear the snowdrifts away from the door so you can enter the building.

I have no problem with linear gameplay necessarily, but Great Adventures is designed to hold your hand to such an extent that there’s simply no serious challenge. On top of the skippable mini-games and detailed goals checklist, you have a constant helper in the form of a little dog named Sam who, if you toss him a bone to eat, will run to the exact spot you should be investigating or show you exactly which items you need to use or combine in your inventory. Given the ample supply of bones scattered around the hotel for you to find, it’s quite tempting (and possible) to rely on Sam to give the entire game away – and he will, if you let him.

Another gripe I had was that the game doesn’t let you cue up actions. So if, for example, the woman is on her way to pick up a lantern but I want her to pick up a butterfly too, and I click on the bone, she’ll abandon picking up the lantern and go for the butterfly instead rather than picking up both.

The game is good for an evening or two of entertainment, but there isn’t much replay value unless you feel like playing the game again with different characters (who act the same, just look different). Players should get a kick out of Great Adventures: Lost in Mountains‘ cute production values and fun challenges, but the game’s generous hint system can actually ruin the fun factor if it’s used too much. That’s why I would recommend the game more for younger players or those looking for a relaxed and non-stressful experience.