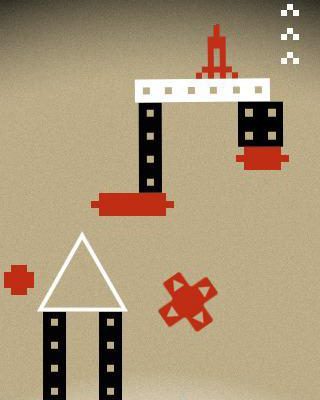 “It’s not the fall that kills you; it’s the landing.” This mantra, observed by everyone from parachutists to cosmonauts, comes front and center in Gravity Lander. The difference here is the landing isn’t what kills you, but messing up the fall will.

Developed in conjunction with the Swiss Arts Council (imagine that; a government who believes that game development is important!) Gravity Lander is a simple, fun arcade title that combines old school graphics and gameplay with physics and controls of our modern touch devices. Each level starts out with a rocket sitting atop a pile of simple geometric shapes. Your job is to tap objects to remove them, allowing the rocket to land safely on Mars. Some objects can’t be tapped, of course, and others are obstacles like circles that roll or propellers that whirl. To maneuver around these you are able to tilt your iPhone to slide objects aside. Finally, you can add a quick boost to your ship by tapping the side of the screen, which buys you time to move objects out of the way as the ship lands. 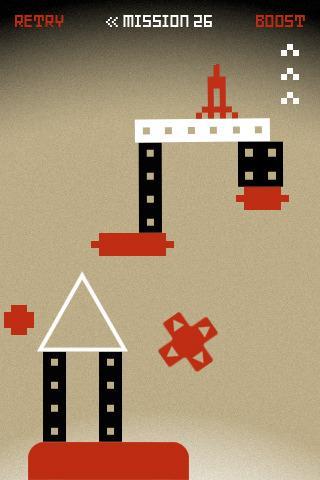 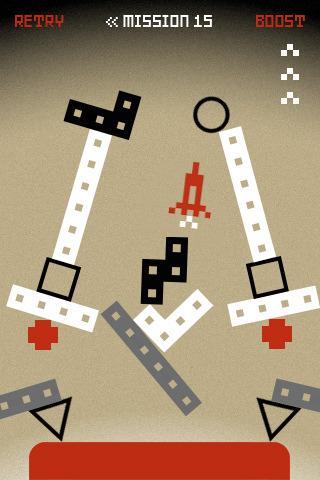 Gravity Lander is definitely another old-school arcade game, but this is hardly a bad thing. The pixilated graphics are simple but given the subject matter (space games were all the rage in the early 1980s) they feel right at home. The controls are simple, but the gravity physics and response are tight. It’s an easy game to pick up and play. With 40 levels, it’s also great for a quick on-the-go play session.

Those 40 levels, though, don’t last too long. Most levels are solved on the first try. The first playthrough will take a little over an hour, and with no achievements or unlockables, there’s little reason to go back.

There are other annoyances, too. While the developers aren’t necessarily English speakers, there is some effort to include English phrases in the game. These are almost all broken, with oddities like “3 cosmonauts start hoovering their booth” (displayed after a success; was it that dirty in there?) or “3 cosmonauts digged a crater into Mars” (displayed after a failure).

Working with the sound is a bit weird as well. Many games feature the ability to play music from your iTunes library. When a game has little to no sound like Gravity Lander, it’s especially important to have this option. If you load up the game with music playing, your music will fade. To do it, you have to go load up the game, disable the audio on the title screen, back out of the game, start playing your music, then reload the game. It’s not exactly intuitive.

Still, smaller issues aside, the main problem with Gravity Lander is there just isn’t that much in the package. It’s a fun, quick diversion to be sure, but I’m kind of left wondering where all that government money went. Gravity Lander is great if you’re looking for a short, quick timewaster. But most players would rather hoover their booth. Did I use that right?