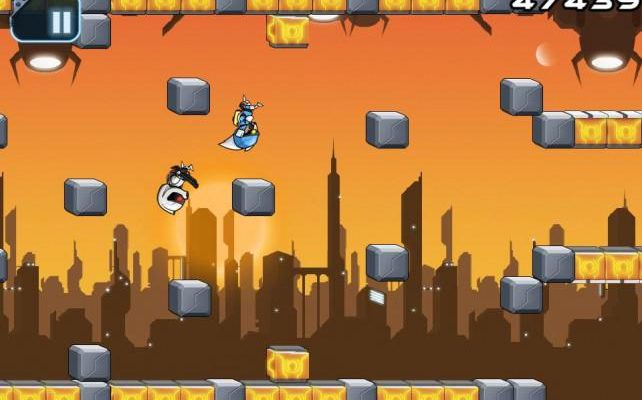 Up and down he goes, where he stops… well, only you’ll know.

Sonic the Hedgehog has got nothing on the Gravity Guy, the star of a brand new 2D racing game for the iPhone named after its hero. Compared to the Sonic games, Gravity Guy is much more difficult and fast-paced — but there’s still a lot here to like.

Gravity Guy has something a story, but it doesn’t make much sense. On a futuristic world, the titular Gravity Guy is being pursued by the Gravity Troops because he’s… um… apparently broken the laws of gravity. Or something. Honestly, the only reason a player would know this is if they read the game’s description in the App Store.

The game is a racing platformer, though it’s actually a lot more challenging than most games in this genre. The basic idea is that players have to tap the screen in order to switch the main character’s personal gravity when an obstacle is in the way or a platform is about to end. There are two reasons for the extra difficulty: the game’s extremely fast-paced, and Gravity Guy is constantly being chased by Gravity Troops. 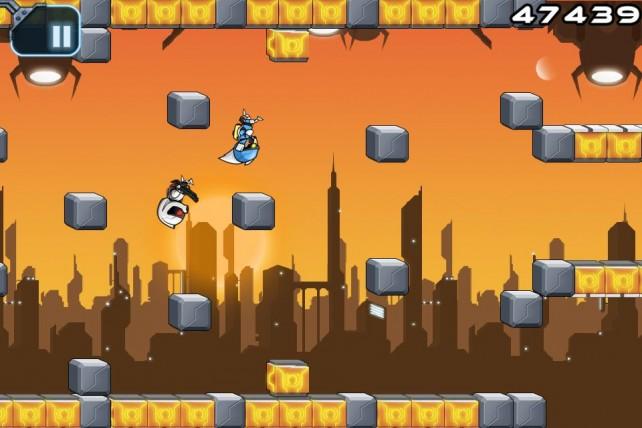 With the former factor, it’s easy to mis-time a gravity switch and wind up falling off the screen. With the latter, moving too slowly or getting stuck on a level’s obstacle has fatal results and forces players to restart the stage. At times the game is simply challenging; at others, it feels punishing and hateful.

There are three ways to play the game. The main attraction is Story Mode, which is the standard single-player campaign (and features no real story to speak of). There’s also a Practice Mode, which allows players to try running through stages without being chased so they can learn the layout for some of the more difficult levels that appear later on. Finally, there’s the multiplayer mode, which allows four people to go up against each other; unfortunately, I was never able to find other players online when I tried to play with this mode for this review despite Gravity Guy‘s seemingly massive popularity in the App Store right now.

Visually, Gravity Guy has a lot of charm. The environments change design from level to level, and the overall look of the game seems like a blend between pulp science fiction and the art style from Capcom’s Viewtiful Joe series. It’s clean and bright and full of goofy sci-fi art that looks great. For those who are using an iPhone 4, there’s even an option to download HD retina graphics (which players should take advantage of if they can, since the results are great).

The music gets the job done, but it isn’t anything special. Players are treated to a generic techno soundtrack. It would’ve been nice if the developers had included an option for players to play their own music. Hopefully that will be included in a future update.

Gravity Guy is never a deep game, but it’s never boring, either. It’s a lot of fun to play and more than a little addictive, provided players can put up with the (sometimes) brutal difficulty. That said, if you’re a fan of quick-to-play platformers, this is definitely worth the $0.99 price tag.